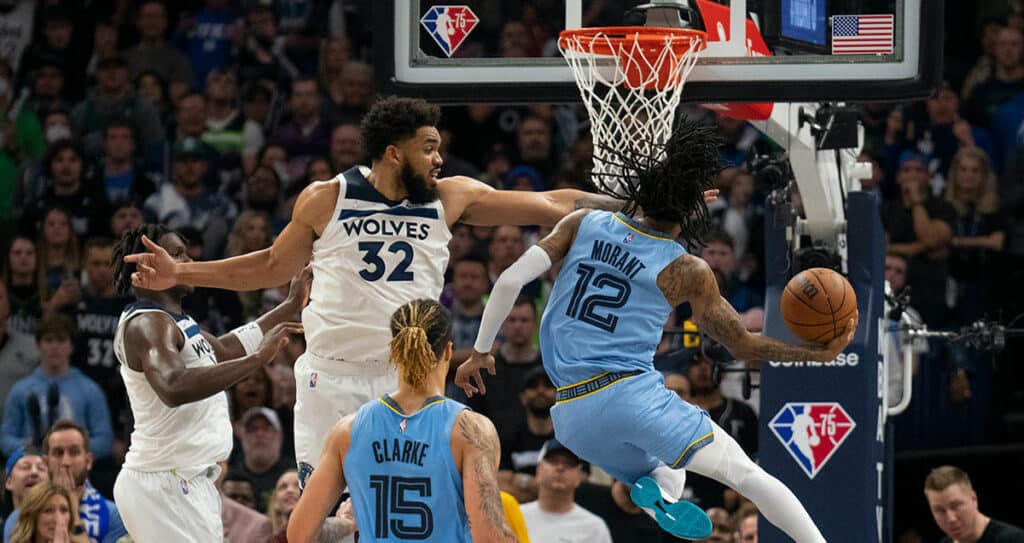 Both Morant and Towns find their way into our best bets for game 6.
By Kyle Guenthner on April 29, 2022

With many teams seeing their playoff lives come to an end, there is only one game on Friday’s slate. The 2-seeded Memphis Grizzlies head back to Minnesota to take on the Timberwolves up 3-2 in the battle of the two youngest playoff teams. Although there is only 1 game on Friday’s slate, it should provide a lot of excitement and incredible basketball as we have seen in the first 5 games of the series.

The Grizzlies manage to escape with a win yet again in the pivotal game five thriller as Ja Morant hit an acrobatic layup with just a second left. The Timberwolves have let a couple games slip away this series and they come in to tonight as 1.5-point underdogs. The total for this game sits at 228.5 for this potential elimination game for the T-Wolves. We expect fireworks once again as these two teams clash for the 6th game of the series at 9:00 PM ET on ESPN. We have focused on our 3 best bets and players props for Friday:

The total for this game is set at 229, which is a high total especially for a playoff game. We believe the total is high for a reason as these two young teams like to run and gun all game. It is no surprise that this series has had the highest pace per game among all postseason first round matchups at a pace of 103.5 possessions per game. During the regular season, the Timberwolves held the highest pace per game at 101.47 possessions per game and the Grizzlies were also top 5 at 100.52.

The Grizzlies rank first in offensive rebound % at a ridiculous 33.8% and the Timberwolves rank 7th at 28.4%. This means that both teams give themselves extra chances on the offensive end leading to more points scored. We saw a lot of this with Brandon Clarke and the Grizzlies crashing the offensive boards in the fourth quarter of game 5. We expect a high paced affair and a close game leading to late-game fouls pushing the total over 229 points Friday Night.

The Timberwolves star, Karl-Anthony towns is dominating the glass this series as he is averaging 11 rebounds per game. That average would be a lot higher if he was not in severe foul trouble in game 3 leading to minimal minutes and production. He has gone over this rebound total in 4 of the first 5 games of this series.

KAT averages just shy of a full rebound more at home than on the road. Steven Adams will be sidelined for tonight’s game, which is one less center to worry about and allows KAT to crash the offensive boards. The Timberwolves need huge production from their all-star center to force a game 7. Facing elimination, we believe Karl-Anthony Towns will go over 11.5 rebounds in game six tonight.

One of the most exciting players in the NBA, Ja Morant, has his first opportunity to win a playoff series in Minnesota tonight. Morant is coming off a game where he was 1 assist shy of a triple-double and scored the game winning shot with seconds left on the clock.

Ja is averaging 10.4 assists per game this series as he has taken a backseat to Desmond Bane on the scoring end. He has gone over 8.5 assists in four out of five games, only missing by the hook in game one of the series. With Minnesota’s defensive focus on Ja, he has turned into a facilitator which we expect this to continue tonight as Ja goes over 8.5 assists in a potential close-out game.

Be sure to review our full player prop picks article for game 6 and our betting guide for round 2 of the NFL Draft for even more action!