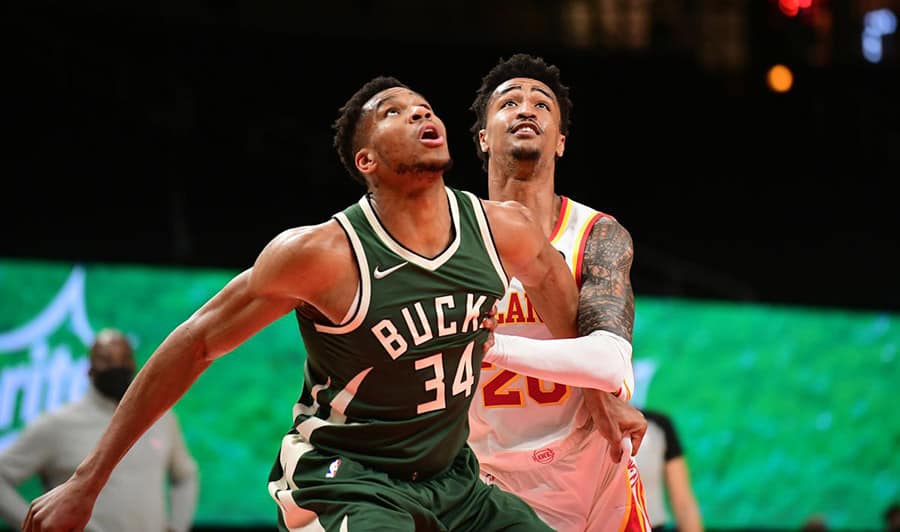 Wednesday night brings us the highly anticipated first game of the Eastern Conference Finals. We are already two games deep into the Suns – Clippers series in the West, but with both the Hawks and the Bucks battling it out in seven games in round two, the league gave them some extra time to freshen up.

The Bucks are coming into the game with three days off, while the Hawks had two off days after their game seven upset over Philadelphia. Let’s see how this one will play out! Shop odds for tonight's game and find the sportsbook with the best odds for each side of this bet below:

We’ve seen it through the entire playoffs that injuries can shape any series in a major way. This one looks like no exception. The Bucks are only without Donte DiVincenzo, who is out for the season due to ankle surgery, but the Hawks are significantly more banged up. Atlanta will be first and foremost without star sophomore De’Andre Hunter.

Hunter averaged 15 points and 5 rebounds in his second year and many considered him the second-best prospect on the squad behind Trae Young. He is much more of a high-profile player than DiVincenzo, but besides Hunter missing the series the Hawks have other concerns as well.

For the first game, Atlanta announced both Bogdan Bogdanovic and Cam Reddish as questionable, while Kevin Huerter is also on the injury report with ankle soreness. Bogdanovic and Huerter have been the number three and number five scorers on the team in the playoffs averaging 13.8 and 11.6 points. The Bucks are presenting difficult challenges on the defensive end even for fully healthy squads, not having key players at 100% health spells trouble for the Hawks early on.

Our first question going into game one is pretty simple: Who will Trae Young guard? Young has been explosive offensively in easy matchups so far in the playoffs, but defensively he is a huge liability. The Bucks simply don’t have guys you can leave essentially unguarded, as even the Pat Connaughton or P.J. Tucker (Trae’s most likely defensive targets) are players that can pose a threat if put in the right position.

Khris Middleton presents another significant issue for the Atlanta defense. He is way better and much more mobile than the Tobias Harris they just faced. The Hawks have been getting extremely lucky with facing no high-level wings so far, but going up against Middleton changes that.

You can’t put John Collins or Gallinari on him as those players simply cannot catch up to Middleton’s speed. Similar issues arise when it comes to defending two-time MVP Giannis Antetokounmpo. Giannis is simply too fast and too powerful and neither Clint Capela, nor John Collins has the tools to slow him down.

On the other end of the floor, we can book that Jrue Holiday will be able to slow down Trae Young significantly. Many experts believe that Holiday has an even better fit facing Trae than Ben Simmons had in the previous round, as the Bucks guard excels at getting through screens and being physical against smaller guards. If Holiday gets to face Young on the other end of the floor, you can book multiple high-scoring outings for the 31-year-old.

The Bucks are rightfully favored, but all the pressure is on them

The good thing for Atlanta is that they are playing with house money at this point. They got to the Eastern Conference Finals with a roster that was one of the worst in the league just last year finishing the season with a 20-47 record. Atlanta is also coached by interim coach Nate McMillan, who only took over the head coaching position in March. The Hawks winning two rounds is a great story, but the Bucks seem like a different beast.

Milwaukee is peaking at the right point. Their three top players are all in their prime and they got through a Brooklyn team that was favored to win it all through most of the season. They also never got deep into the playoffs and with aging and the luxury tax looming above their heads, this seems like their time to go all in.
The Bucks have one of the best transition offenses in the NBA running the most transition plays (17.8% of their possessions start with a transition) while being 8th in offensive efficiency during these. Milwaukee also holds the third-highest field goal percentage in the paint. They are facing what is likely their easiest matchup through the playoffs so far and they have the depth and talent to overcome them easily. Milwaukee just needs to stick to what has been working so far: easy buckets in the paint and being aggressive in transition.

Give us the Bucks to win game one and cover the spread as well! Extra rest and home court are on their side and will be the difference here against Atlanta.