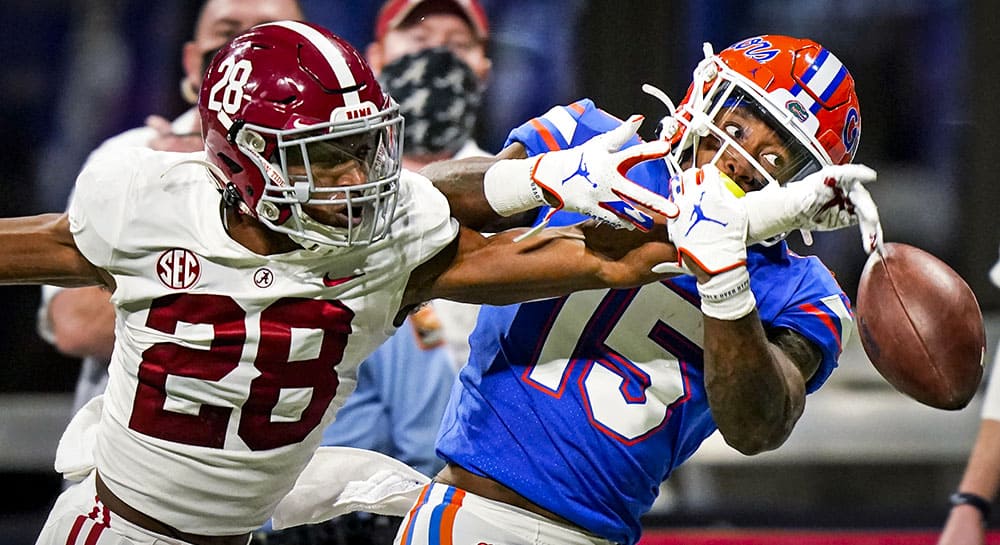 The Week 3 college football slate is loaded with several intriguing games as most teams begin playing conference opponents. One of the biggest matchups on the slate features the Alabama/Florida rivalry, which kicks off at 3:30 Eastern Time on Saturday. These two teams have dominated the SEC for several decades and there’s no love lost between them.

Crimson Tide coach Nick Saban was in a testy mood after Alabama’s 48-14 win against Mercer in Week 2. Even though Alabama won handily, Saban was concerned about his team’s lack of focus and lackadaisical penalties. Dan Mullen’s Florida Gators have started the season with a 2-0 record after upending South Florida 42-20 last weekend.

As usual, we’ll break down each team’s offense and defense to find out which team has the edge in this matchup. We’ll also give out our best bet for this game so stay tuned.

PointsBet has extended its industry-leading welcome bonus through week 3 of the college football season! Follow these steps to lock in $200 free with any $20 wager:

Best Available Spreads and Total for Alabama at Florida

Most online betting shops have Alabama favored by 15 to 15.5 points over Florida. The total is anywhere from 58 to 59 depending on which sportsbook you check.

Speaking of checking odds, make sure you do so before betting on this or any other game on the college football board. Our free odds checker is a quick and easy way to find the best spread or total for your betting needs. Here’s a live look at the best odds for Alabama at Florida:

What to Expect from the Alabama Offense in Week 3

The Tide offense looked like it was sleepwalking during the first few drives against FCS foe Mercer last Saturday. The slow start was just enough to tick coach Saban off so expect a more spirited effort against the Gators this week. Sophomore sensation Bryce Young comes into this game with 571 passing yards and seven touchdowns so far on the young season. Young looks to be a Heisman contender but how will he fare in his first game against an SEC defense?

Look for Tide offensive coordinator Bill O’Brien to keep the play calling balanced against a talented Gators defense. Running back Brian Robinson Jr. is averaging 5.9 yards per rush so far this season so expect Bama to lean on him early in this contest. Former Ohio State Buckeye Jameson Williams has proven to be a huge asset to Bama’s receiving corps (157 yards, 2 TDs) so we expect O’Brien to call his number on several occasions against Florida.

What to Expect from the Florida Defense in Week 3

Florida’s defense has looked dominant through the first two weeks of the young season. Keep in mind though that they have yet to be tested. Florida Atlantic and South Florida aren’t exactly offensive juggernauts. The Gators could be in for a bit of a shock against all of Bama’s offensive weapons.

That being said, Florida’s defense has plenty of experience as eight of the eleven starters are upperclassmen. Linebacker Jeremiah Moon leads the team in tackles with 11 while defensive end Zachary Carter already has three sacks. Expect Gators defensive coordinator Todd Grantham to blitz quite a bit to see if he can rattle Bama’s young QB.

What to Expect from the Florida Offense in Week 3

There’s a QB controversy brewing down in the Sunshine State as junior Emory Jones has already thrown four picks so far this year. All World freshman QB Anthony Richardson (AR-15) has shown some serious playmaking ability and actually leads the team in rushing yards with 275. Will Dan Mullen utilize both quarterbacks against Alabama?

Richardson is averaging a robust 25 yards per carry so the smart money says that Mullen will at least put him in the game for a few series. Mobile quarterbacks traditionally give Alabama problems so Mullen may run both Jones and Richardson quite a few times. Look for Florida to try to get wideout Jacob Copeland (190 yards, 2 TDs) involved early and often against Bama on Saturday.

What to Expect from the Alabama Defense in Week 3

This Alabama defense may be the best Saban has had in quite some time. The pass rush from the defensive line has been impressive through the first two games as they’ve registered seven sacks. However, this unit won’t be nearly as effective if defensive end Will Anderson can’t play against Florida. Anderson hurt his knee last week against Mercer and Saban said he is listed as day-to-day.

The Tide secondary is off to a fast start on the young season. So far, Bama has picked off four passes through two games. Look for defensive coordinator Pete Golding to try and confuse Emory Jones into making some costly mistakes in the passing game.

Call us squares if you want, but we’re rolling with the Tide in this one! Saban always has the troops ready after disappointing performances like Bama had last week against Mercer. We’re betting that ol’ Saint Nick lights a fire under his team during this week of practice!

The Gators are a tough opponent and Mullen is one heck of a coach. However, this team misses the leadership of former QB Kyle Trask and the playmaking ability of Kyle Pitts and Kadarius Toney.

This is a huge step up in class for Florida after starting the season with two cupcake opponents. We’ll lay the points and be screaming Roll Tide all day long! Best of luck!