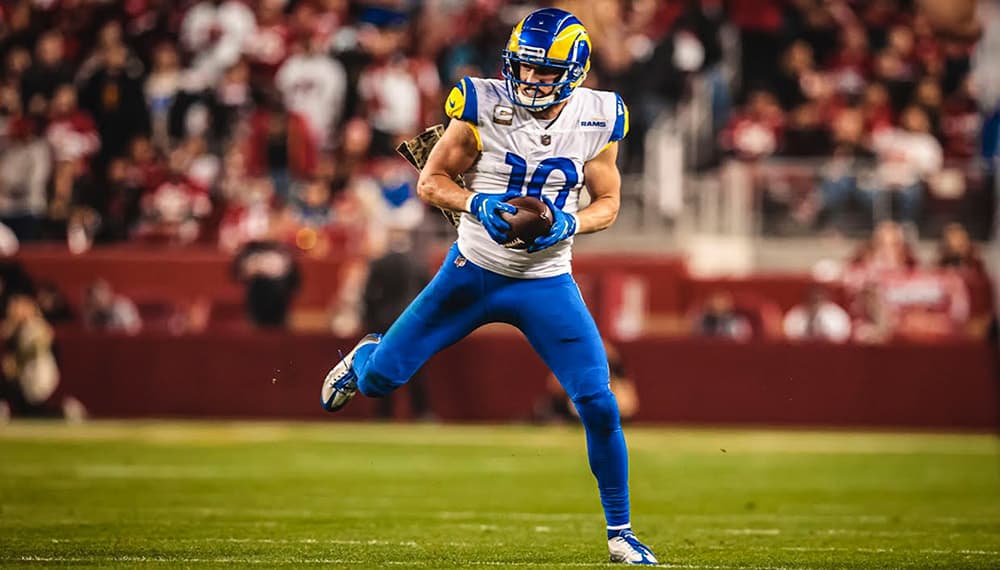 Week 14‘s Monday night football game is likely to be the best primetime game of the season. As two of the best teams in the NFC and the entire NFL will go head to head in a high profile, high stakes division matchup.

The Los Angeles Rams and Arizona Cardinals are only separated by two games of the season as it is heading towards the final stretch and playoff positioning is being decided.

Both of these teams are right in the thick of a playoff race as the season has reached its final 5 weeks. Both teams have quarterbacks that are potential Most Valuable Player candidates in Kyler Murray and Matthew Stafford. They are also anchored by star wideouts and contributing running games.

These are two teams that could potentially meet again way down the line in the NFC Championship game. In my opinion, we will see a third installment of this game at some point in the playoffs.

As has been the case this season, the Monday night game has been a bit of an afterthought throughout the week. As a result, the line has seen little movement. After opening with the Cardinals as a 3-point favorite, Rams money moved it to 1.5 points before it settled in at 2.5 points late in the week.

The total has sat between 51 and 51.5 points all week. Numbers of note that are currently available: PointsBet has the Cardinals (-2) at -110 and BetMGM has under bettors covered with a 51.5 number available at -110.

The Rams are sitting pretty in second place in the NFC West with a record of 8-4 on the year. They are currently occupying the top wildcard spot in the NFC as they head into this Monday night game with the NFC and NFC West leader Arizona. They will be without star-wideout Robert Woods and the newest signee Odell Beckham Jr. has failed to produce enough to replace Woods and his contributions in recent weeks.

The Rams have been a streaky team this season as they opened up the year with a record of 5-1 before losing three straight games to the Tennessee Titans, San Francisco 49ers, and Green Bay Packers. In their last game, they rebounded with a 37-7 win over the Jacksonville Jaguars at home to snap their three-game losing streak and restore some momentum before this huge showdown with the Cardinals.

The Arizona Cardinals have put together a fantastic season, despite not having superstar quarterback Kyler Murray for multiple games of it. They are currently 10-2 on the year and we’re the first team and only team as of right now to hit the double-digit win mark this season. They are in first place in the NFC West, NFC, and the entirety of the National Football League. Arizona is set up to have the bye week for the playoffs, and are the likely Super Bowl favorites as of this moment in many people's eyes.

They have been led by Kyler Murray up until this point. In his absence, Colt McCoy stepped in and led the team to a 2-1 record. He was instrumental in keeping the team on track during Murray’s recovery from a knee injury. One that he suffered in their first loss to the Green Bay Packers on Thursday night football back in October.

In Kyler's first game back he threw for 123 yards and 2 Touchdowns he also ran for an additional two touchdowns as well. He led the Cardinals to a 33-22 win over the Chicago Bears last Sunday and he will be looking to follow up that performance in this game against the Rams.

It is also hard not to attribute the success of Arizona to the resurgence of James Connor at the running back position as well, as he has seemingly found the form that made him such a dangerous player back in his college days at the University Of Pittsburgh and his first NFL stint with the Pittsburgh Steelers.

This one is sure to be a regular-season classic in primetime and that is what makes picking winners in these types of games even harder. However, I have Kyler Murray leading the Arizona Cardinals to a huge win over the Los Angeles Rams in this one at home.

With the line being as low as it is, it provides the perfect opportunity to take Arizona with the 2.5 points they are spotting the Rams. Betting the spread provides slightly favorable odds as compared to the moneyline. I'd feel good about taking over of 51 points at -110 odds as well.

With no rushing props available for this matchup, you will have to turn your attention to both teams' passing attacks. It is worth noting, however, that these teams combined to rush for just under 340 yards in their last meeting.

Kupp has averaged just under 113 receiving yards per game and has been held under this number a whole one time this season. That being said, that game did come against the Cardinals. In addition to slowing down Kupp, Arizona has the league's 4th best overall pass defense this season. That being said, if you look at their schedule they really haven't been tested outside of a handful of matchups. We think Kupp gets over 88.5 in Arizona on Monday night.

The Cardinals are great against opposing tight ends this season and Higbee's number coming in at 36.5 makes this a lock for us. He has topped 36.5 receiving yards in just 5 of his 12 starts and we are betting Arizona's defense can make it 5 of 13 here. This one is available at -110 at most sportsbooks.