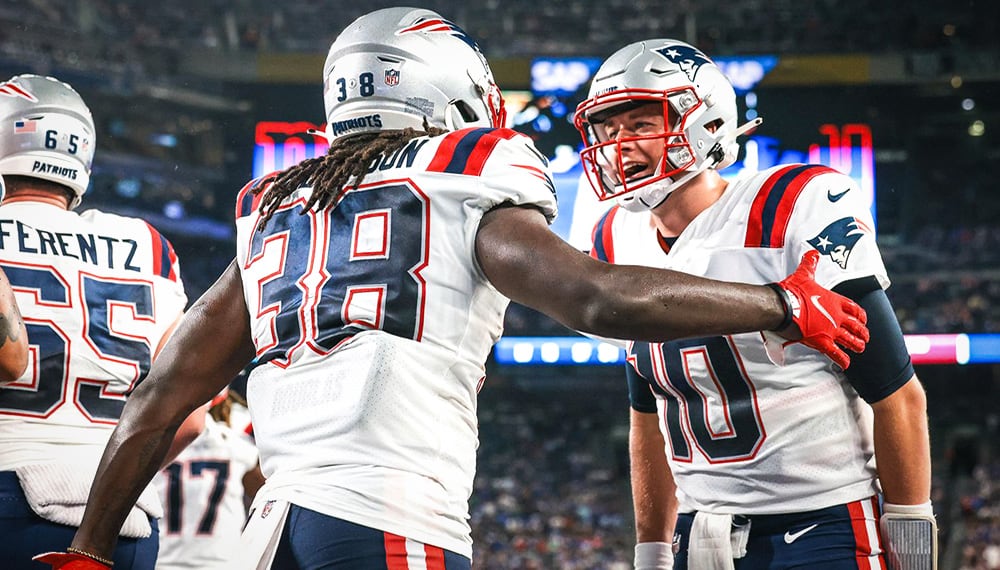 Thursday Night Football will feature the New England Patriots (6-4) traveling to the Atlanta Falcons (4-5). These are two teams on completely different trajectories after 10 weeks.

The Patriots enter week 11 on a 4 game winning streak, covering in all 4 of those games while outscoring opponents by a total of 100 points. Atlanta, on the other hand, is coming off their worst performance of the season, a 40 point loss in Dallas. The Falcons have dropped 2 of 3 and enter this week with plenty of issues on both sides of the ball.

That being said, it is hard to every lay 5.5 points with a road team in primetime, and that has been especially true this season. Can Atlanta find a way to keep this game close and cover the spread? Here is a look at our picks for best bets and our two favorite prop bets for Thursday night.

Bet $1 on Either the Patriots or Falcons, Get $100 Free at PointsBet

Before we jump into our pick and the thoughts behind it, let's first take a look at the best number available for both sides and the total. Bettors looking to bet the Falcons can find them at +7 at TwinSpires Sportsbook, while Patriots bettors can find a -5.5 number at PointsBet Sportsbook. The total sits at 47.5 across the board, as it has all week.

We are not sold that the Patriots are back by any means. Three of their six wins came against the Jets and Texans, and their win last week came against a Browns team that was playing without Nick Chubb, Kareem Hunt, and Jack Conklin, and Baker Mayfield was knocked out of the game in the third quarter.

That being said, they match up perfectly with the deficiencies Atlanta currently has on its roster. Here are just a few ways New England should be able to control this game:

The Falcons have struggled to stop the run and have given up an NFL-worst 35 minutes of possession to opponents over their last three. New England has the best offensive line in the NFL and will run it at will Thursday.

Defensively, Matthew Judon has been a force off the edge this season and will feast on Kaleb McGary who has had all kinds of issues in pass protection. With Atlanta's 29th ranked rushing attack posing virtually no threat to the Patriots, Judon and Uche will pin their ears back and give Ryan zero time. Look for Belichick to take away Pitts, and force Ryan to beat him with quick throws to a ridiculously thin group of receivers.

While the over bet has been popular here, we are taking the under. A lack of big plays from either side and little faith in a Falcons offense that has already been held under 17 points in four games this season has us doubting this one gets to 48 points.

We like New England to win by double-digits here, but think the score ends up closer to 27-16 and stays under the 47 total.

This is a tough Thursday night game to make prop picks for on a Tuesday. We know the Pats will go run-heavy, but the combination of Harris' injury status and Rhamondre Stevenson's big week 10 performance make it hard to project the workload. The receiving props attached to the Patriots' receivers are just spot on. If we had to take on, we would bet the over on Meyers simply because his targets are more consistent and we know he will get a favorable matchup in the slot.

Despite the injury questions that remain unanswered, we were able to identify two plays that are worth making today.

With Cordarrelle Patterson out, we are willing to trust Mike Davis with volume only. We won't touch his yardage number, but he seems like a lock to at least get to 3 receptions.

The Patriots are phenomenal against opposing tight ends, allowing under 30 receiving yards per game to the position. We know that will be a point of emphasis this week and that Pitts will find it rough sledding.

So who does Ryan turn to for easy completions? We think Davis and Gallman are both strong candidates as allowed the third-most completions to opposing RB's this season and the second-most receiving yards.

There is no way to explain sportsbooks putting a 30.5 yardage total next to Olamide Zaccheaus' name. He has gone over 32 yards just once out of nine starts this season and it took a 49 yard reception to get there.

He's gone over 31 yards a total of two times and only once in a game that Russell Gage was also active in. On the season, Zaccheaus has 15 receptions in 8 games. So, for this prop to hit, Zaccheaus would need arguably his best game of the season, in a brutal matchup, with basically zero targets.