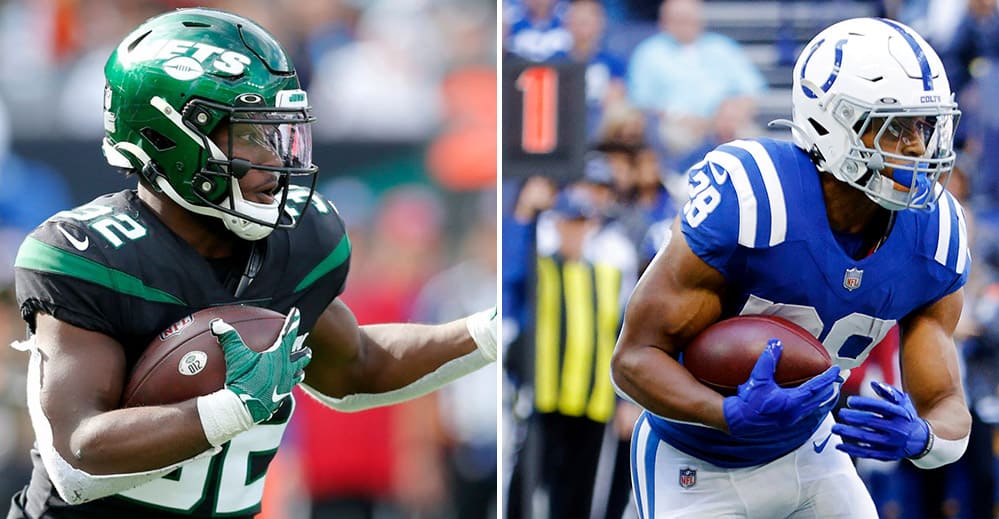 Best Bets and Prop Bets for Jets at Colts

If you looked at the NFL’s calendar before the season this Thursday Night Football matchup between the Jets and the Colts hardly jumped off the page, but given how this past weekend played out, we are in for a game that has no shortage of headlines.

Before we jump into our picks for best bets and best prop bets for Thursday Night, let's look at the current odds and best number available for both the Jets and Colts as well as the total.

Best Odds for Jets at Colts

Given the way the Jets played and the fact that the Colts gave away a big win last week, it should come as no surprise that this line has been all over the place this week.

The look-ahead number for this matchup was Indianapolis -14, it opened at -10.5 following Sunday's games and early Jets money quickly moved it to -10. However, bettors have been on the Colts since that move and most sportsbooks have the Colts back to 11-point favorites.

The total has seen similar volatility moving from a 42.5 point look ahead number to an opening total of 47, before being bet down to as low as 45.5.

What to Watch for From the Jets on Thursday Night

New York is fresh off their second win of the season improving their record to 2-5. This Jets victory over Cincinnati was extremely impressive, as New York closed as an 11.5-point underdog led by a QB making his first career start. Cincinnati also entered the week with a lot of hype following competitive games with the Vikings and the Packers followed by a 41-17 beatdown of the Ravens in Week 7.

The Jets opened up as +3.5 dogs last week and proved the market wrong by pulling off this upset behind QB Mike White, who deserves all the praise he gets after this game. The Jets won the yards per play battle by +0.7 and scored in all five of their drives to the Cincinnati red zone.

The Jets could be an entirely different beast behind White, who averaged over 9 yards per pass attempt in his first career start with less than a 2 second average time to throw. White ended up completing a whopping 82.2% of all his passes for 405 yards, 3 touchdowns, and 2 interceptions. The 26-year-old earned a 107.9 PFF grade in the process.

White’s 405 yards led all QBs in passing yards in Week 8, sportsbooks paid 125 to 1 if you placed a bet on this happening before the Week 8 games started.

If you take a step back and look at the entire season of the Jets, things still look ugly. The defense is below average both in average depth of target allowed and yards per reception allowed. The run game is essentially non-existent. Things should be better with White at the helm and a few healthy bodies back in the lineup, but this is still not a good team.

What to Expect from the Colts on Thursday Night

Indianapolis ended up losing to the Titans in overtime in a game that very likely killed all the remaining division hopes of the now 3-5 Colts. Frank Reich’s boys were the better team early in that game leading 14-0, but everything turned around in a few seconds when Colts DL Tyquan Lewis blew his knee during a return, after picking off Ryan Tannehill. Lewis’s fumble resulted in a Titans touchdown one play later putting the Titans within one score instead of being down 21-0.

The big question is: how good are the Colts? Our model currently rates Indianapolis barely 1-point better than your average team on a neutral field and while Carson Wentz was solid in 4 out of his last 5 games (and the team has one of the best run defenses in the league), Indianapolis is still weak against the pass.

We are taking the points with the Jets in Week 9. With all the injuries to Indianapolis, this is the only side we could look at. The Colts are coming off an exhausting overtime loss and while this sets up well as a bounce-back spot, we just don’t see this team being ready to step up against an opponent that is playing better than their record would suggest.

As for the total, we are leaning towards the over at 47. Neither of the pass defenses is good and both QBs should be able to put up some points here.

Say what you will about Mike White's performance in Week 8, this will be his first true test. The Jets have been a completely different team on the road this season, and he now has to face a defense with game film of him as a starter.

The Jets scoring offense drops from 22 PPG to 11 PPG, while the defense drops from the 8th fewest YPG at home to the 2nd most on the road. Before you argue small sample size, the Jets have played the Panthers, Broncos, and Patriots on the road this season... not exactly the league's top offenses.

Clearly, this is a spot where we want to back the Colts' offense at home. With that in mind, here are our two favorite over props for Thursday night:

Taylor's production this season has been largely matchup and game-flow dependent. His three largest rushing totals came against teams currently under .500 (49ers, Texans, Dolphins). We have been hammering Taylor's total yardage number over the past five weeks as books have been slow to adjust to his ever-growing role in the passing attack.

In a game where the Colts are favored by double-digits, you have to like Taylor's odds of getting to 16+ carries and we think he will get at least three targets in the passing game. He has gone over this number in every game that he has at least 16 touches this season, and the Jets defense should not be the exception.

While we typically do not recommend chasing RB targets, this is another play that makes sense based on the spread. If the Jets are down early, on the road, expect White to have to throw it a bunch again this week, and as we saw last week, he loves to check it down.

Carter has 17 receptions over his last two games, not surprisingly, that uptick in production came in his two highest snap counts of the season. With Tevin Coleman still banged up and Carter seizing his opportunity, we expect that 70% snap share to hold up moving forward. This means more routes ran, more targets, and more receptions... particularly in games where the Jets are 10+ point underdogs.