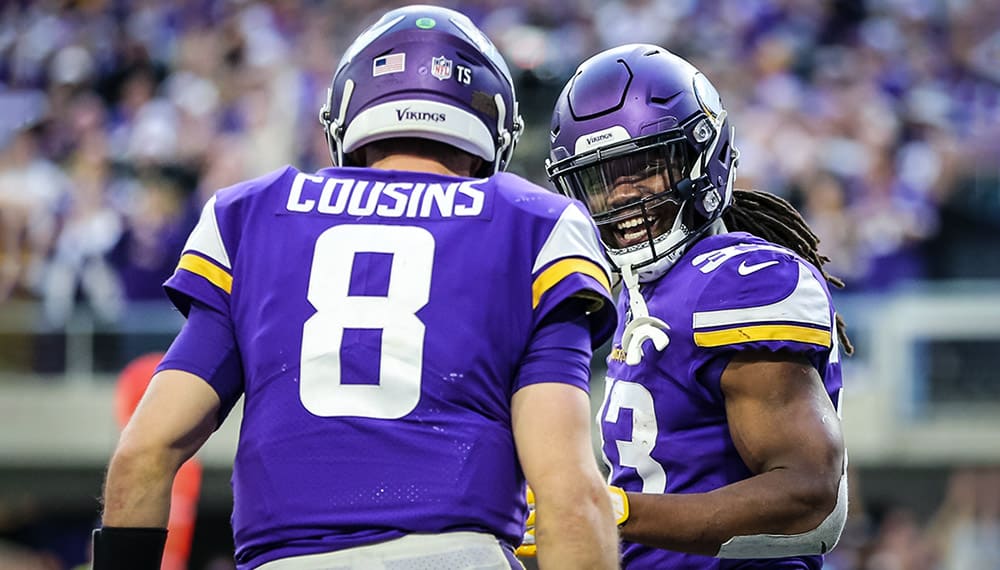 Best Bets and Prop Bets for Cowboys at Vikings

Two high-powered teams coming off their bye weeks meet for Week 8’s Sunday Night Football game. The 5-1 Cowboys opened up as slight road favorites at U.S. Bank Stadium and early betting action has leaned toward America's team in this one. Their opponent, the 3-3 Vikings could also easily be 5-1, as they dropped two games in a pretty unlucky fashion (overtime loss to Bengals & 1-point loss to the Cardinals).

Both squads have top-five offenses and the total of 55 - the highest on the board by 2.5 points - suggests that there is a decent chance for us to see some fireworks here. Through six games, Dallas is currently sitting 4th in offensive DVOA and 5th in total DVOA. Minnesota isn't too far behind sitting at 12th in overall DVOA, 12th in offensive DVOA, and 6th in defensive DVOA.

Before we jump into what we expect to see from each team this week, let's take a look at the live odds and best numbers available for each side of this matchup.

Live Odds and Best Number Available for Both Sides and Total

One injury issue that we must address, as it could shape the spread of this game is Dak Prescott’s calf strain. Dallas’s QB did hurt his leg in the team’s Week 7 overtime win over New England. Prescott did skip the Week 8 Monday practice, was limited on both Wednesday and Thursday, and his availability is still very much in question.

If he happens to miss the game, we would expect his absence to move the spread about 7.5 points. This would result in Dallas - who are 2.5 to 3-point favorites at this point – flipping into field goal underdogs.

What to Expect from the Cowboys on Sunday Night

Bettors are certainly counting on Prescott to make this start here as Dallas was quickly bet up from the pick’em opener to a field goal favorite within a few hours on Monday. The Cowboys did look impressive so far this season and it seems like they are perfectly built to win high-scoring games like this one.

The defense has been a big issue for the road team though, allowing 12.4 yards per reception and an 8.2-yard average depth of target, but you can get away with a lot if your quarterback completes 73% of his passes with an 8.5-yard average depth of target. Dallas’s wide receiver duo of Amari Cooper & CeeDee Lamb has also impressed playing a huge part in the team having a league-leading 60% first-down rate on successful receptions.

Besides the spectacular passing game, Dallas also has an explosive run game headlined by a rejuvenated Ezekiel Elliot and Tony Pollard. Elliott has been overlooked by many after a mediocre start, but he already has 521 yards in just 6 games with six touchdowns. Zeke also contributed to the success of the passing game with 16 successful receptions.

What to Expect from the Vikings on Sunday Night

While many are extremely high on Dallas, let’s just not overlook Minnesota in this contest. Minny’s starting QB, Kirk Cousins currently owns an 89.9 PFF rating through the season making him the third-highest rated quarterback in the league only trailing Tom Brady and Russel Wilson. Cousins did complete 70% of his passes so far with a 7.4-yard average depth of target.

Minnesota has its own set of strong weapons in WRs Adam Thielen and Justin Jefferson and superstar running back Dalvin Cook. Jefferson is leading the team with 542 yards and 13.2 yards per carry, but Thielen is the more efficient RZ threat of the two and he already has 5 touchdowns in just 6 games despite dealing with a foot injury in the last few weeks.

We have a tough time picking a side here, but getting points at home with a rested team that has one of the strongest home-field advantages in the league is awfully enticing. The Cowboys are the slightly better team, but them laying 3 points on the road could be an over adjustment by the market.

Yes, backing Kirk Cousins in primetime is a much less sex pick than Dak Prescott and the Cowboys, but this Minnesota team is just a few lucky bounces away from having a 5-1 record which would likely turn them into favorites in this game. There is nothing sweeter than backing a Sunday night home dog and we are just going to do that.

Besides grabbing Minnesota & the points, we also like the over here. This number has been as high as 55.5 this week, but the doubt surrounding Prescott's availability has lowered it all the way to 52.5. Given the strength of both of these teams is on the offensive side of the ball, we think this could turn into a shootout.

While the majority of sportsbooks pulled their prop bets for this one mid-week with Dak's status unknown, we were able to get some action prior to them being taken down. Here is a breakdown of the prop bets we are currently holding for the Sunday night game:

As we have seen from the Cowboys throughout this season, they are perfectly comfortable going with an extremely run-heavy offense. With one of the stronger offensive lines in football and plenty of weapons on the outside that create favorable boxes, the Cowboys rushing attack can be unstoppable for even the league's top run defenses.

Unfortunately for the Vikings, they are nowhere near one of the league's top run defenses. Minnesota is giving up just under 5 YPC on the season (30th in NFL) and are giving up over 5 YPC at home this season. On average, opposing running backs are racking up just under 110 yards per game against this group.

While Zeke may lose work to Pollard, his snap count is still at 72% and his share of the rushing production has been way up over the past month. In fact, he has gone over this 74.5 yards prop in 3 of his last 4 games and has averaged over 100 rushing YPG over that stretch. This bet is currently live at FanDuel and is juiced at -122.

This was an instant lock when we saw it on DraftKings earlier in the week and should it come available again, is our favorite play for this matchup. Outside of his first game back from the ankle injury, Cook is averaging 24 carries per game on the season. If you include that game, he is still over 20 carries per game.

Assuming Dak plays, the best way for the Vikings to keep that powerful Cowboys offense on the sideline is by handing the ball to Cook. While the numbers may not show it, if you consider the Cowboys' schedule which has included games against several opponents that have zero run game, giving up over 4 YPC is actually a disappointment. Harris and Stevenson put up 124 yards and 2 touchdowns on 23 carries the last time the Cowboys took the field.

While we want to keep this section at two locks per game, there are two additional over plays we would consider in this matchup. First, if Dak and Gallup are active, look for CeeDee Lamb to have a big game working against Jourdan Lewis in the slot. Lewis is by far the Cowboys' worst cover corner and should struggle against an elite slot receiver like Lamb.

Tyler Conklin is also worth a look in both player props and single-game DFS contests. Given the strength of this Cowboys defense is the outside corners, opposing tight ends have diced the secondary up. We saw it week one with Gronk (8/90/2) and then again with the Eagles (6/119/1). Conklin has gone over his 31.5 yards prop in tougher matchups already this season, so he should find plenty of success in week 8.