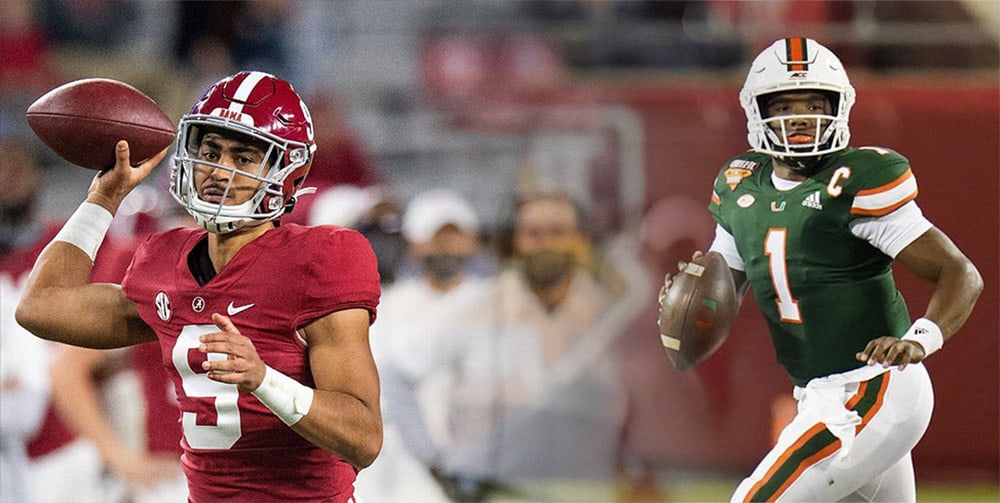 Best Bets and Odds for Alabama vs Miami

The college football season officially kicks off on August 28 with a handful of Week 0 games. However, the majority of sports bettors are focused on some of the marquee matchups that start in Week 1. Today, we’ll break down the Alabama Crimson Tide vs. Miami Hurricanes game that takes place on September 4 at 3:30 EST and share our favorite bets for this marquee matchup.

Current Line and Best Available Odds for Alabama vs. Miami

The defending champion Crimson Tide will feel right at home in Mercedes Benz Stadium in Atlanta, which is where the SEC Championship game takes place every year. ‘Bama is favored by 18.5 to 20 points, depending on what sportsbook you check. The line opened at 18 and most books have seen nothing but Crimson Tide money so far.

It wouldn’t surprise us if this line gets pushed as high as 21 before there is some inevitable sharp buyback right before kickoff. Be sure to check our College Football Live Odds Tool before making your Week 1 wagers. Here’s a live look at the best odds for both the side and the total in this game.

Best Odds for Alabama vs. Miami

Bet $10 on any week 1 NFL or CFB game and get $125 in free bets with this offer from PointsBet. Here is how to take advantage of this limited time promotion:

What to Expect from the Alabama Offense in Week 1

The Crimson Tide loses a ton of talent on the offensive side of the ball as four starters from the 2020 squad were first-round draft picks. Keep in mind though that Alabama never rebuilds, they only reload. How quickly can new offensive coordinator Bill O’Brien get these new starters up to speed?

Sophomore Bryce Young is one of the most highly touted quarterbacks to ever set foot in Tuscaloosa. Crimson Tide fans are excited to see just how good the young man is this season. Young played only in mop-up duty a year ago, but will finally get his shot to show the college football world his talents against Miami.

With Young just getting his feet wet, expect O’Brien to lean heavily on Brian Robinson Jr. The 6-1 228 pound redshirt senior has patiently waited his turn to shine. The Miami defense had trouble stopping the run last season and was only ranked 75th in the country in rushing yards allowed per game (174.5).

In the passing game, look for O’Brien to give Young some short, quick throws to build his confidence early on in the game. John Metchie is a speedy young wideout who is always a threat to take the ball to the house. Also, don’t forget about tight end Jahleel Billingsley, who is 6-4 230 pounds and runs faster than most receivers!

What to Expect from the Miami Defense in Week 1

Manny Diaz’s defense made some positive strides in 2020 but still looked very mediocre at times. This unit loses their top passer rusher, Jaelan Phillips, who was a first-round pick of the Miami Dolphins. However, defensive tackle Nesta Jade Silvera has the ability to limit the Tide rushing attack.

The Canes return some nice pieces in 2021, including safety Bubba Bolden, who led the team in tackles a year ago (74). The Miami secondary will probably be the strength of the defense as Bolden and Al Blades Jr. form a dynamic duo. Other guys like DJ Ivey and Gurvan Hall Jr. also have NFL type of ability. This group is supremely talented but can they contain the potent Alabama passing game?

What to Expect from the Miami Offense in Week 1

D’Eriq King returns as a darkhorse Heisman candidate for the Canes this season. The former University of Houston star did well last season for Miami as he passed for 2,686 yards and 23 touchdowns. King also showed his dual-threat ability by rushing for 538 yards and four touchdowns. Mobile quarterbacks have given Alabama defenses fits in the past so that is a positive sign for Miami fans.

King has plenty of talented weapons to throw the ball to with NFL prospects like Mike Harley and Charleston Rambo. Harley led the Canes in both receptions (57) and receiving yards (799) in 2020. Rambo transferred in from Oklahoma and has world-class speed.

Running back Cam’Ron Harris should help take some pressure off of King and the passing game. Harris led the Canes in rushing last year and has a nose for the end zone (11 touchdowns in 2020). However, running the football against a Nick Saban defense is usually a tall order.

What to Expect from the Alabama Defense in Week 1

The expectations are always high for Alabama on defense and rightfully so. The amount of five-star recruits on this side of the ball is nothing short of mind-boggling. Will Anderson (7 sacks in 2020) and Christopher Allen (6 sacks in 2020) are both tremendous pass rushers.

Henry To’o To’o transfers in from Tennessee to make this linebacking corps even better. Christian Harris is a beast against both the run and the pass.

The Bama secondary should be one of the deepest units in the country this year. Cornerback Josh Jobe led the team in passes defended a year ago with 11. Malachi Moore led the Tide interceptions last year as a true freshman.

Our Pick: Alabama / Miami UNDER 62

The side in this one looks a bit tricky so we’ll pass on that and take the Under 62 instead. We expect a fairly conservative game plan from Nick Saban and Bill O’Brien since this is Bryce Young’s first game as a starter. Saban is eager to get back to running the ball more often and that should help our under bet.

Also, D’Eriq King is fun to watch but this Alabama defense will be the best he’ll see all season long. King should be able to make a few big plays with his legs but Alabama’s linebackers will eventually contain him.

This total opened at 63.5 and the sharp money immediately took the Under. It’s now down to 62 at most sportsbooks and we still see plenty of value on it! We’ll recommend a medium size bet on UNDER 62!