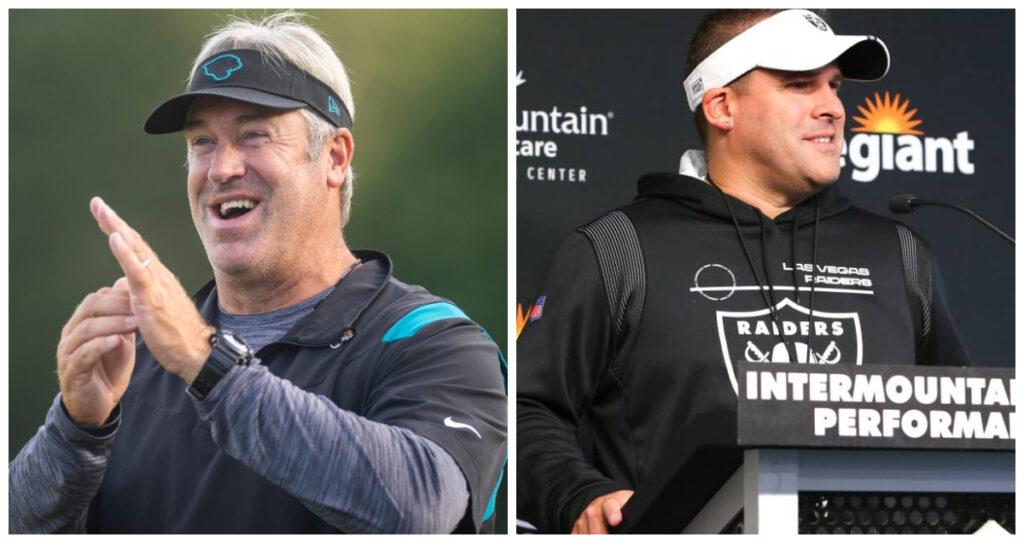 Doug Pederson and Josh McDaniels will make their preseason debuts for their new teams in Thursday's NFL Hall of Fame Game.
By Mike Noblin on August 4, 2022

The Jacksonville Jaguars and the Las Vegas Raiders will battle it out at Tom Benson Hall of Fame Stadium in Canton, Ohio. At the time of this writing, the Raiders are listed as a 2.5-point favorite and the total is at 30.5. Lots of money has come in on the Under, as the total has dropped by three points.

Though most of the big-name starters won't play, it's still nice to have football back on TV. Let's get to our game preview and best bet for the NFL Hall of Fame Game.

Both teams will be breaking in new coaches tonight. Doug Pederson takes over for the embattled Urban Meyer in Jacksonville while Josh McDaniels replaces the also-embattled Jon Gruden in Las Vegas. Both coaches have acknowledged that their starting QBs will not play in this game.

The Jags will be even leaner at QB, as it was recently announced that backup C.J. Beathard won't play either. That leaves Jake Luton and Kyle Sloter to do most of the heavy lifting for Jacksonville. Though most fans probably haven't heard of Sloter, he's thrown 11 touchdowns and only 1 interception in his preseason career.

The Raiders will definitely have the edge as far as QB rotation goes in this game. Nick Mullen is an experienced veteran and he'll be battling it out with Jarrett Stidham for the backup QB job. Stidham should understand McDaniels' offense quite well since the two spent time together with the Patriots.

We don't really have a strong feel for the side in this game. However, we'd lean slightly to the Jags +2.5. Pederson was 7-1 in the preseason with the Eagles while McDaniels only won one of eight preseason games during his tenure as Broncos head coach.

You just knew this was coming, didn't you? Hall of Fame Games are notorious for being ugly affairs that are low-scoring. We don't see this one being any different.

Both teams have only had a few practices under their belts and neither coach will want to show much of anything on offense. Almost none of the stars will be playing, which means that it'll be mainly third stringers and fourth stringers duking it out in the second half. We are expecting a lot of "three yards and a cloud of dust" plays and plenty of defense.

The Under has done quite well in Hall of Fame games over the years. The Under has cashed in six of the last nine Hall of Fame Games. It's also went 12-7 since 2000. We'll ride the Under and cheer for lots of punts and maybe a few field goals!

Best of luck with all of your Thursday action! It's great to be back! Let's put this one in the win column!