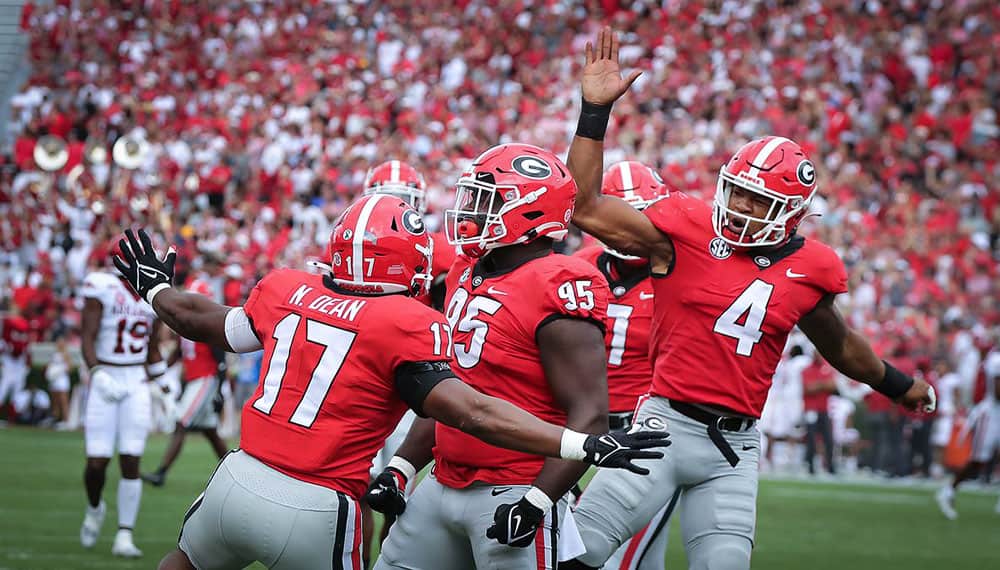 Best Bet for the SEC Championship - Georgia vs. Alabama

The SEC Championship Game is the matchup most hardcore college football fans have wanted to see since the season started back in September. Though the SEC is full of above-average teams, Alabama and Georgia have been the cream of the crop for several years in a row.

Is this the year that Kirby Smart finally takes down his old boss Nick Saban? The sportsbooks seem to think so, as they’ve made Georgia a 6.5 point favorite in this game.

The point total is currently sitting at 49.5 at the time of this writing. Let’s do a deep dive into each team and give out our Best Bet for this iconic matchup.

Before we dive into the details of the matchup, let’s take a look at the live odds for this game. Our free odds tool can help you quickly decipher the best spot to place your bets.

Most folks expected J.T. Daniels to be the main man in Athens this season. However, Stetson Bennett has done an admirable job of leading this Georgia offense as he’s thrown for 1,985 yards and 21 TDs. Bennett is also pretty mobile, as he’s averaging 6.3 yards per rush.

Bennett has had a fine year, but the Bulldogs’ offense is centered around Zamir White and his running ability. White has run for 691 yards and 10 TDs this season. Also, don’t forget about James Cook, White’s backup, who has rushed for 581 yards and 7 scores.

Georgia’s best receiver this year has been Brock Bowers, who has caught 37 passes for 652 yards and 10 TDs. Alabama’s weak link on defense has been the secondary so Bennett may have to try and win this game with his arm.

It’ll be interesting to see how much George Pickens plays this week. The star wideout missed the entire season with an ACL tear but came back last week to catch a pass against Georgia Tech.

Though not as dominant as in years past, this is still a very good Alabama defense. This unit ranks 7th in yards per play allowed, 10th in third-down conversions allowed, and 2nd in yards per rush allowed. Georgia may have a tough time trying to run the ball on Alabama’s stout front seven.

The emotional leader of the Crimson Tide defense is defensive end Will Anderson, who has 13 sacks this season and is almost impossible to block with one guy. Look for Georgia to bring a tight end over to Anderson’s side to try and slow him down a bit. As a whole, this Bama defense ranks 5th in QB Sack Rate.

The main area of concern for Alabama’s defense is the aforementioned secondary, which allows 217.5 passing yards per game (48th). Saban loves to keep his defensive backs on an island in man coverage but these corners have been susceptible to the deep ball all year. Will Bennett be able to exploit this weakness?

What the heck is going on with the Bama offensive line? My goodness, they’ve had an awful time of late, both in pass protection and in the running game. The Tide only averaged 1.9 yards per rush against Auburn and only 3.1 yards per rush against Arkansas. The most embarrassing stat was the 6 rushing yards that Bama gained against LSU (6, yes, for the whole game).

If the Tide couldn’t run the ball against those three defenses, there’s no way they’ll have any semblance of success against the Bulldogs’ scary front seven. If Alabama is going to hang in this game, it’s up to Bryce Young and the speedy receivers.

Young has been as good as advertised this season, maybe even better. The 6-foot sophomore may very well end up as the Heisman winner this year since he’s thrown for 3,901 yards and 40 TDs this season.

Jameson Williams is the Tide’s most explosive receiver, as he’s racked up 1,261 receiving yards and 13 TDs. Look for Bill O’Brien to call lots of quick receiver screens to get Williams the ball in space quickly.

It’s not a stretch to say that this Georgia defense may be one of the best in college football history. It seems as if every starter on this defense will have a future in the NFL one day.

This unit ranks 1st in a ton of categories like points per game allowed, yards per play allowed, and red zone scoring percentage. Defensive tackle Jordan Davis is a one-man wrecking ball and the Tide will have to have a good game plan for how to keep him out of the backfield. Like we mentioned above, we don’t see Bama doing much damage on the ground against this insanely gifted defensive line.

Can the Bulldogs’ secondary contain Bama’s receivers? That’s the million-dollar question! The Dawgs appear to be up to the task though, as they rank 1st in yards per pass allowed and 2nd in passing yards allowed per game. Georgia’s defense appears to have no glaring weakness.

Get on this one quickly, as it’s been dropping like a rock since the lines came out on Sunday afternoon. We think there’s a touch of value in Alabama, especially if you can get a +7. However, our favorite play is the Under in this game.

Our power ratings make this total at 46 so we think there’s enough value to make this our Best Bet. These two defenses can shut down each other’s offense. Both defenses are good at getting off the field on third down, which could lead to more punts than people are expecting.

We’re not sure who wins this game, but we think the score will be 24-21 so take the Under! Best of luck!

5 Player Prop Bets to Target for Bengals at Titans

A potential Western Conference playoff matchup takes place Thursday night at the American Airlines Center when the Dallas Mavericks host the Phoenix Suns. The Suns lead the Western Conference with a 34-9 record. The Mavs are currently in 2nd place in the Southwest Division, 4 games behind the Memphis Grizzlies. This won’t be the 1st […]

Assembly Hall will be rocking Thursday night when #4 Purdue (-3.5) comes to town to take on Indiana. Purdue comes to town with a 15-2 record including 4-2 in the Big Ten. Indiana also has four wins in the conference along with three losses and a 13-4 mark through the early half of the season. […]