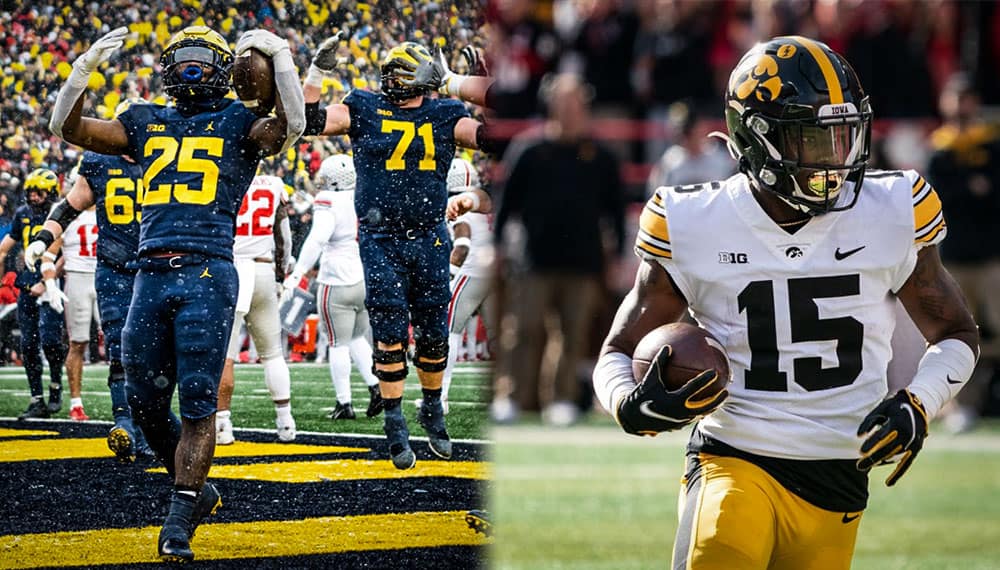 Best Bet for the Big 10 Championship - Michigan vs Iowa

The Big Ten Championship will take place on Saturday night at 8:00 Eastern Time on Fox with Iowa squaring off against Michigan. The Wolverines (11-1) will be supremely confident after knocking off their archrival Ohio State last weekend. The Hawkeyes (10-2) were lucky to come back and beat Nebraska last Friday in a wild and wacky game!

Most folks are expecting Michigan to win this game with relative ease as they’re currently favored by 10.5 or 11 points at most sportsbooks. The point total is currently sitting at either 43.5 or 44. Let’s take a look at the live odds for this game before breaking it down in further detail.

Michigan’s offensive masterminds (Harbaugh and Gattis) vowed to run the ball more this year and it has paid off in a big way. Michigan pushed Ohio State around in the trenches last week and Big Blue will look to keep that positive momentum going in this one.

Hassan Haskins is an absolute beast running the football as he’s rushed for 1,232 yards and 18 TDs this season. Iowa has a great defense but can they slow down this bruising Michigan running game enough to keep this game close?

Cade McNamara is a very underrated QB and he’s had an outstanding season. The 6-1 junior has thrown for 2,301 yards and 14 TDs and he’ll be looking to burn the Iowa secondary with the deep play-action pass. The Wolverines’ best receiver is Cornelious Johnson, who has 594 receiving yards and 3 TDs.

This Hawkeyes defense is filled with lots of players that have NFL ability. Iowa ranks 6th in yards per play allowed, 8th in yards per rush allowed, and 10th in yards per pass allowed. Though this defense has no glaring weaknesses, they do allow a red-zone score 87.88% of the time (100th).

Iowa doesn’t pressure the QB very well, but both Joe Evans and Lukas Van Ness have six sacks each. Michigan’s offensive line has done a fabulous job in pass protection this season, as they only allow a sack 2.65% of the time (2nd).

The Iowa secondary does a great job of limiting big plays. McNamara will have to keep an eye on Dane Belton (5 INTs) and Riley Moss (4 INTs, 2 pick-sixes). The Hawkeyes make their living off of turnovers but Michigan only averages 0.8 giveaways per game (8th).

To say the Iowa offense is painful to watch would be a gross understatement. The Hawkeyes rank 121st in yards per play, 104th in third-down conversion rate, and 114th in red-zone scoring. As we said, it’s been brutal to watch this unit.

Spencer Petras has gotten the majority of the playing time this year and he has thrown for 1,532 yards and 9 TDs. Those numbers aren’t terrible but the 6-5 junior is still prone to bad decision-making. Sophomore Alex Padilla has gotten more playing time of late but he hasn’t shown the ability to stretch defenses either.

The Hawkeyes’ best offensive player is RB Tyler Goodson, who has run for 1,101 yards and 6 TDs this season. Goodson has great vision and above-average speed so Iowa will try to get him the football in space. If Michigan can contain Goodson, Iowa could have a hard time scoring many points in this game.

Michigan’s defense doesn’t get much hype but they’ve done a phenomenal job all season long. The Wolverines rank 11th in yards per play allowed, 18th in yards per rush, and 9th in yards per pass. It’s going to be difficult for the Hawkeyes to generate any offensive momentum against this group unless they come in sluggish off the huge Ohio State victory.

The Wolverines are blessed with two dynamic pass rushers in Aidan Hutchison and David Ojabo. This duo has combined for a whopping 23 sacks and they could be a serious problem for an Iowa offensive line that ranks 104th in QB Sack rate. Petras could be running for his life, especially if the Iowa ground game struggles.

Michigan’s secondary does a solid job of limiting big pass plays but they don’t intercept many passes. Daxton Hill and DJ Turner are tied for the team lead in picks with two apiece. Iowa doesn’t appear to have enough speed at the wideout position to stretch out this Wolverines secondary.

Shop around and grab -10.5 if you can on this one, at the time of publishing FanDuel Sportsbook still had Michigan at -10.5 (-108). We typically don’t like to lay double digits, especially with a total as low as this one. However, we just don’t see how Iowa is going to score more than 14 points in this game.

The only way the Hawkeyes keep this game close is if Michigan turns the ball over, which they haven’t done much of all year. Iowa may be able to limit Michigan’s great rushing attack for a quarter or even a half, but in the end, this huge Wolverines offensive line will wear them down.

Our power ratings made this line Michigan -12.5 so there’s a touch of value with the Wolverines. We see Michigan winning this game 28-14 so lay the points. Best of luck with all your wagers on Championship Weekend!