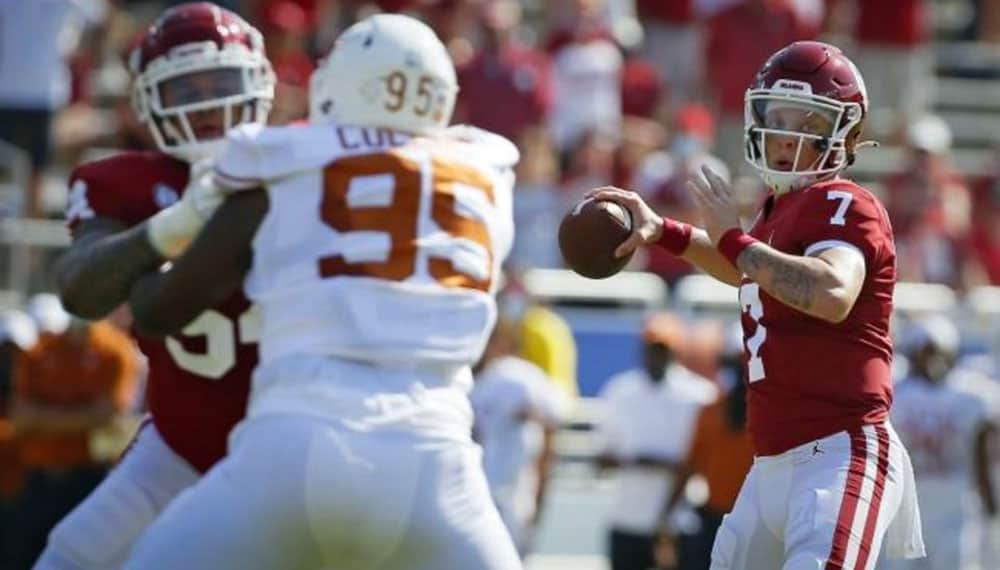 The annual Red River Showdown will be must-see TV on Saturday at Noon Eastern Time on ABC. Did you know that this series started way back in 1900? This year’s matchup has all the makings of another instant classic.

The Sooners have looked rough at times but still come into this game with a perfect 5-0 record. The Longhorns have started 4-1 and new coach Steve Sarkisian has this offense humming right along at breakneck speed. Oklahoma won last year’s game by eight points in four overtimes so Texas will be looking for some revenge.

If you haven't tried the PointsBet sportsbook, then this offer is for you. PointsBet is offering all new players a $200 bonus with any $20 NFL or CFB wager. Here is how it works:

The Sooners are currently listed as three and a half point favorites so the oddsmakers are expecting a close contest. The total is currently sitting at 63.5 points.

Before betting on this iconic Big 12 matchup, check out our free odds screen. This tool will help you find the sportsbook with the best available odds. Here is a live look at the best odds for Oklahoma vs. Texas:

What to Expect from the Oklahoma Offense in Week 6

Oklahoma head coach Lincoln Riley is one of the best offensive play-callers in the country. However, QB Spencer Rattler and this Sooners offense have looked inconsistent at some points this year. The offense is only averaging 5.7 yards per play (52nd in the nation).

The offense looked like it found some traction last week against Kansas State, as Rattler completed 22 of 25 passes for 243 yards and two scores. The 6-1 200 pound sophomore has accounted for 12 total touchdowns (10 passing) but has thrown four untimely picks. Rattler’s favorite target is Marvin Mims, who has caught 14 passes for 264 yards.

What to Expect from the Texas Defense in Week 6

The Texas defense has had a slow start to the season. This unit has plenty of natural ability but they’re giving up 5.9 yards per play (90th in the nation). This front seven has a glaring weakness against the run, which means that they may have a hard time stopping Sooners stud running back Kennedy Brooks from going off.

The Longhorns pass rush is averaging a couple of sacks per game. Notre Dame transfer LB Ovie Oghoufo has two sacks and three tackles for loss. Texas will need Oghoufo to get some pressure on Rattler to make him uncomfortable in the pocket. The last thing defensive coordinator Pete Kwiatkowski wants to do is give the Heisman hopeful plenty of time to throw the ball.

What to Expect from the Texas Offense in Week 6

New head coach Steve Sarkisian has this Longhorns offense moving at lightning speed. Sark is an astute play-caller and he always finds ways to get his best playmakers the football. The Texas offensive line has done a fabulous job of opening up running lanes as this unit is averaging 268.6 yards rushing per game (4th in the country). RB Bijan Robinson should be in the Heisman conversation, as he has already cranked out 652 rushing yards and seven touchdowns this year.

It’s kind of weird not seeing Sam Ehlinger under center for the Longhorns this year. It seemed like Ehlinger was the starting QB for about nine years! New QB Casey Thompson has been a nice surprise for the offense so far.

The 6-1 junior has thrown nine touchdown passes and only three interceptions so far this year. It will be interesting to see how Thompson performs in his first Red River Showdown! There may be a bit of nerves for him in the early going of this one.

What to Expect from the Oklahoma Defense in Week 6

Remember when OU’s defense was the laughingstock of the Big 12? Well, those days are over! Oklahoma has come a long way on defense in just a couple of years. Defensive coordinator Alex Grinch has put together a nice game plan that highlights his players’ strengths.

The OU front seven has been a wrecking crew so far. This unit is only allowing 2.9 rushing yards per carry, which ranks 17th in the nation! They’re also only giving up 19 points per game, which ranks 33rd in the country.

The Horns’ offensive line may have their hands full trying to block both Perrion Winfrey and Isaiah Thomas. Both of these big bad defensive linemen have 3.5 sacks on the young season. The Sooners have 15 sacks on the year and will look to add to that number by putting pressure on Thompson all day long. 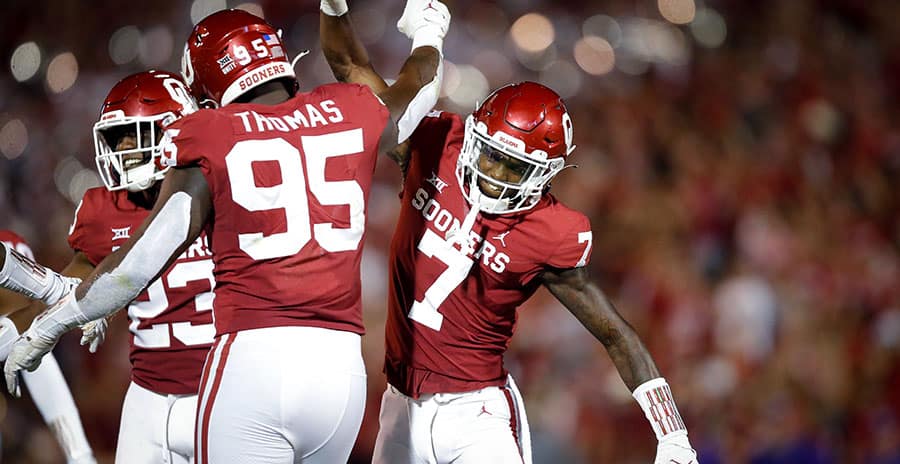 This one is a bit scary, especially with these two talented offenses. However, if you look closely enough, you’ll see a few things to like about the Under in this matchup.

Though both teams have prolific offenses, there’s a certain amount of nervousness that comes into play during rivalry games. Sure, Sark loves to go with a fast pace and a wide-open playbook. However, we expect him to lean heavily on Bijan Robinson and only give Casey Thompson some short throws in the early part of this game.

Though Texas is amazing at running the football, the Sooners have enough beef on the d-line to slow down Robinson a little bit. The Sooners are only allowing 83.6 rushing yards per game.

The running clock should also help out our case for the Under in this game. Texas averages 45.2 rushing attempts per game which ranks 13th in the country. If that stat holds up in this game, the clock will be moving with fewer stoppages for incomplete passes.

We also don’t expect the OU offense to score a ton of points either. Sure, they put up 37 against Kansas State last week. However, they only scored 16 against West Virginia and 23 against Nebraska. Take the Under! Good luck!