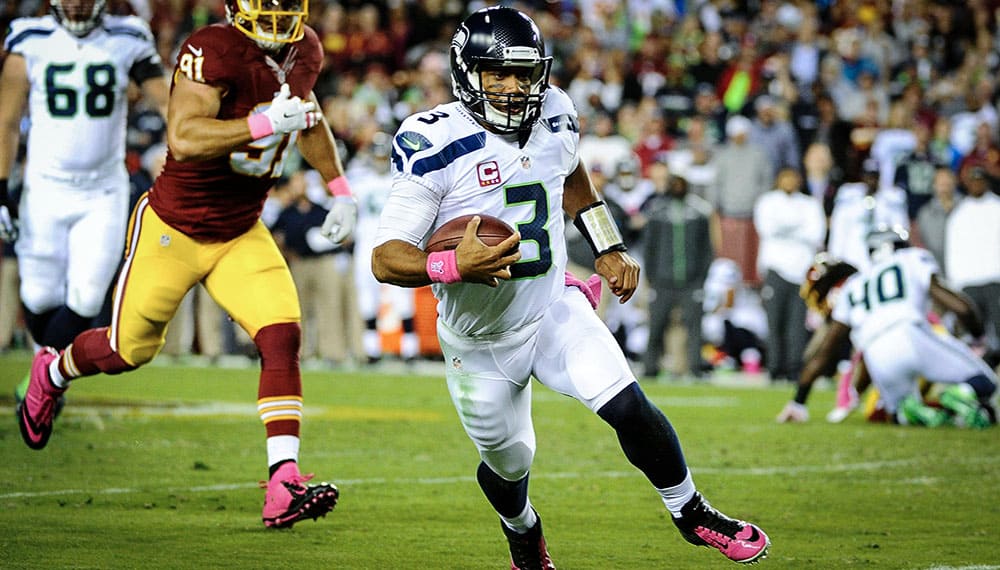 Week 12 of the NFL season wraps up tonight with a Monday Night Football matchup between the Seattle Seahawks and the Washington Football Team. The Seahawks come into this game with a 3-7 record while the Football Team is sitting at 4-6. Neither team has lived up to their preseason expectations so far this year.

The sportsbooks see these two teams as pretty much equal as the point spread is currently sitting at a pick ‘em at lots of online shops. The point total has been set at a relatively low 46.5 points. Here’s a look at the best available odds from our Free Odds shopping tool.

What to Expect from the Seattle Offense on Monday Night

Even though Russell Wilson has been back for a couple of weeks, this Seattle offense still can’t seem to find any type of rhythm. The Seahawks have been bitten by the injury bug all season long and unfortunately for them, D.K. Metcalf and Alex Collins are both listed as questionable to play in this game. If Metcalf can’t go, it will hurt their ability to stretch the defense.

It’s admirable how fast Wilson came back from that disgusting finger injury! The former Wisconsin star has thrown for 1,564 yards and 10 TDs this season with only 3 picks. Tyler Lockett has been Wilson’s favorite target so far this season, as he has accumulated 717 receiving yards and 3 TDs.

Seattle’s numbers are pretty underwhelming, as they rank 15th in yards per pass (7.0) and 14th in yards per rush (4.3). Those numbers aren’t that bad when you consider the massive amount of injuries they’ve had on offense. This unit has to improve their 3rd down offense, which only converts 32.41% of the time (31st).

What to Expect from the Washington Defense on Monday Night

The Football Team’s defense has been a shocking disappointment this season after such a great statistical year in 2020. Washington is giving up 26.7 points per game (28th) and 5.9 yards per play (29th). They also rank dead last at getting off the field on third down.

This unit’s greatest strength has been its ability to stop the run. Washington only allows 4.1 yards per rush (11th) and 98.5 rushing yards per game (7th). Jonathan Allen leads the team with 6 sacks so the Seattle offensive line better have a game plan for how to block him.

What to Expect from the Washington Offense on Monday Night

Taylor Heinicke is starting to mature as an NFL QB. The former Old Dominion standout has thrown for 2,390 yards and 15 TDs so far this season. He still tries to fit the ball into too many tight windows though, as evidenced by his 9 INTs.

Washington is decent at running the football. Antonio Gibson has racked up 601 rushing yards and 5 TDs and he is coming off a nice performance against the Panthers last week. However, Gibson has been limited in practice this week with a shin injury and is listed as questionable for this game.

Heinicke’s favorite wideout so far this year has been Terry McLaurin. The former Ohio State star has caught 54 passes for 735 yards and 5 TDs. Heinicke should be looking McLaurin’s way quite a bit in this game, especially since Seattle has struggled in pass coverage all year long.

Seattle’s defense is the backbone of this team. This unit has done a great job of keeping its team in a lot of ball games this season. Seattle ranks 9th in 3rd down defense, 5th in red zone defense, and 5th in yards per rush.

Their main Achilles heel has been their secondary, as they give up 6.9 yards per pass and 279.6 passing yards per game. That is not good news, especially considering that starting strong safety Jamal Adams (74 tackles, 1 INT) has been limited in practice all week with a groin injury. Veteran free safety Quandre Diggs leads the team with 3 INTs this season, so Heinicke will have to be careful when throwing in his direction.

Our Best Bet for Monday Night Football: 1st Half UNDER 23

We don’t have a good feel for this side in this one, as our power ratings agreed with the oddsmakers and made this one a pick ‘em as well. However, we love the first half Under in this spot for a few reasons.

We can’t see either team generating a lot of offense in this game. Neither team is explosive, as Seattle’s offense ranks 20th in yards per play and Washington’s offense ranks 19th. Both teams are also below average at converting third downs, which should lead to lots of punts.

We like the full game Under a little bit as well but feel like the first half Under is the slightly better option. Both teams will try to establish the run early on in this game. Neither team should have much success doing so, as both defenses are very good at defending the run.

This should be a fairly boring, low-scoring affair with lots of punts and field goal attempts. Both teams have struggled in the kicking game all year so that should help our Under as well. Take the first half Under 23 and best of luck with all your Monday Night Football action.