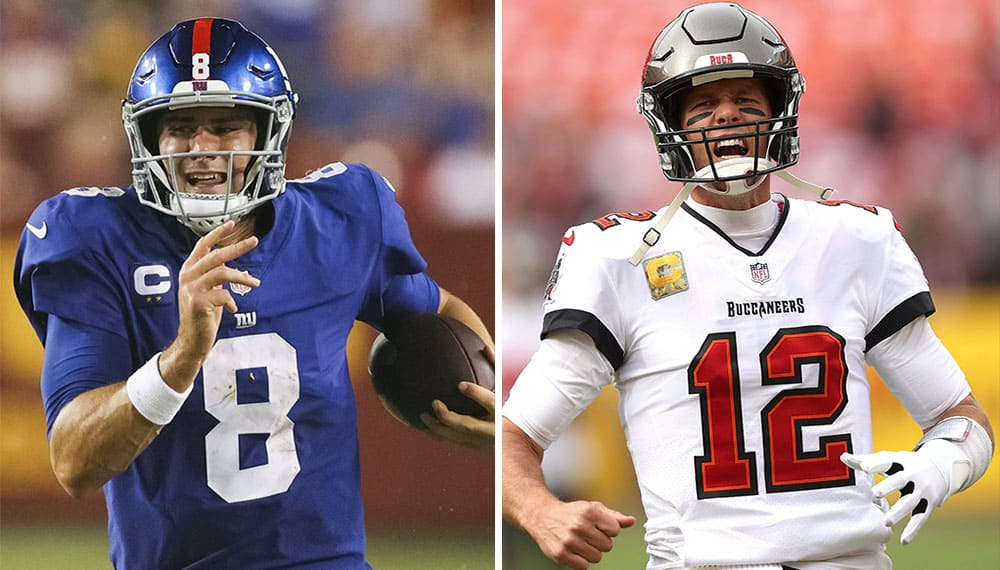 Surprisingly in Week 11, I am only making my second selection on Monday Night Football. We have had some pretty incredible games on Monday night in 2021, but I have finally landed on a bettable side here.

Can Daniel Jones recreate the magic of his first-ever start against the Tampa Bay Buccaneers during his rookie season? The Giants will need a little bit of “Vanilla Vick” as they try to get their first-ever primetime win under Daniel Jones.

The NFL schedule makers have not been kind to the New York Giants, giving them yet another road primetime game. Two weeks ago against the Chiefs and now against the reigning super bowl champion, Bucs.

The Giants have quietly been improving, especially on the defensive side of the ball. They have had the fortune of going up against multiple teams heading in the wrong direction, especially in terms of health.

The Panthers and Raiders offenses have looked broken these past few weeks and the Kansas City City Chiefs have been in a strange funk seemingly all season. The Giants have been turning opposing teams over and have not allowed more than 20 points in their last three games.

The key here will be Daniel Jones. How well can he play against one of the most formidable defensive lines in football? The Giants folded against a top pass rush in the Los Angeles Rams, allowing Jones to be sacked four times. Jones also threw for three interceptions.

A key difference, however, will be the difference in secondary. The Washington Football Team exposed this weakness, beating them over the top multiple times in their 29-19 victory last Sunday. The Bucs sacked Heneicke five times, but he still triumphed with what is becoming his trademark guile.

I think this is the outline for the Giants to stay competitive in this game. They could be getting star running back Saquon Barkley from his ankle injury. They have also brought in former Colts running back Johnathon Williams, in case Devontae Booker still can’t go. Jason Garrett will need to allow Daniel Jones to move the ball downfield and be extremely aggressive with his play-call.

Jones will likely need to use his scrambling ability and get out of the pocket and into the open field as he runs for his life against Devin White, Lavonte Davis, and company.

The Bucs shouldn’t need to blitz against a paper-thin Giants offensive line, but they will be without DT Vita Vea after suffering an MCL injury. The Bucs will also be without Antonio Brown and perhaps Rob Gronkowski.

The Giants have a tall task ahead of them, but Heineicke and the Football Team have shown us the game script needed to remain competitive with this banged-up Buccaneers squad. They are extremely vulnerable in the secondary and the defense needs to get pressure into Tom Brady’s pocket.

Live Odds for Giants at Buccaneers

This line opened at 12 or even 12.5 and has been bet down to 11. Normally, I put a lot of emphasis on beating the closing line and a 1-1.5 point line move might take me off of a certain play. Acknowledging this is less about how much I like the Giants and more of a lesson in point value.

We cannot make the mistake of treating a 12 → 11 line move the same as a 3 → 2. We aren’t getting the best of the number but I am still comfortable taking the points here with the Giants. I think there is good potential for two-way action on this game, so I’d be curious to see where this line settles.

The spot favors the Giants, coming off of their bye, and the return of Saquon Barkley could push this line to 10. Underneath 10 I would be off the Giants, as that comes much closer to a “key number” in football. I see little to no difference in the 10.5 → 12 range, so wherever you can find the Giants there should be the play for Monday Night. The bet: Giants +11.