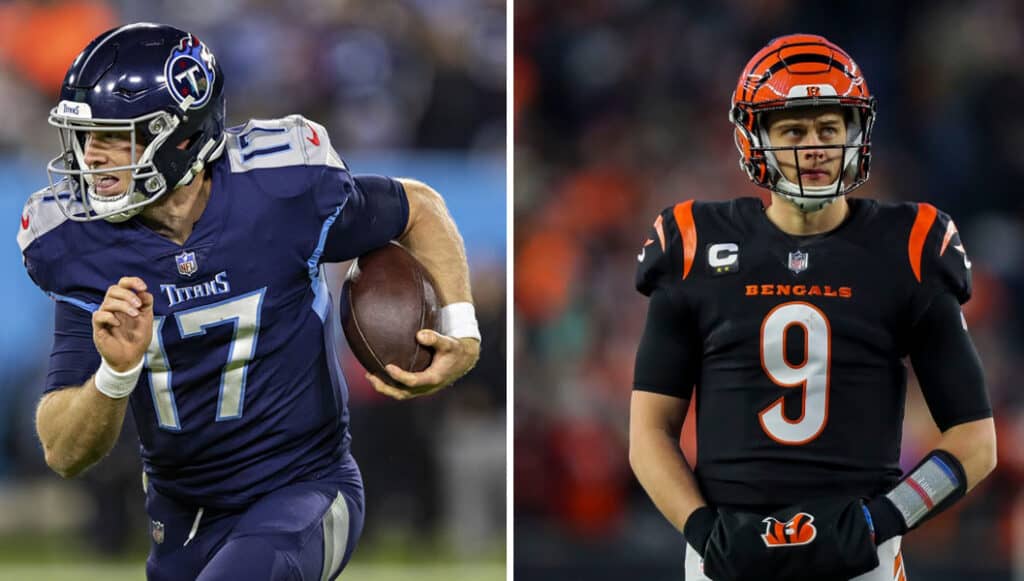 The King is (Probably) Back! This article will take a look at the matchup between the Cincinnati Bengals and the Tennessee Titans and how the return of Derrick (King) Henry will affect this game. It is important to note, I am currently holding a future on the Titans at 12/1 to win the Super Bowl as per my latest writeup.

The Bengals high-octane offense and Joe Burrow’s unwavering confidence have turned them into America’s sweetheart playoff team, securing the division in Week 16, and defeating the Las Vegas Raiders in the Wild Card round. The line in that Raiders game closed at -5.6 or -6 in favor of the Bengals, which I thought was high, despite the cover.

On paper, it looked like a strong victory with Burrow throwing for 2 touchdowns and the defense forcing two turnovers. However, while I do believe the Bengals deserved to move into the next round, I think the Raiders win that game more often than you think if it were repeated. Red zone inefficiency killed the Raiders, with penalties on their 4th quarter field goal drive and an untimely interception in the end zone on their final drive. The Raiders did not get enough pressure on Joe Burrow, despite sacking him twice.

I think this game is extremely important to look at because of the statistical similarities between the Raiders and Titans defenses, specifically on the pass rush.

The biggest similarity between the defenses is the lack of blitz. The Raiders have the lowest blitz rate in the league and the Titans are the fifth-lowest. The Raiders were able to generate more pressure in 2021, however, as the Titans were in the bottom half of the league in pressure%.

We are focusing a lot on the pass rush because of the Bengals swiss-cheese offensive line that cannot protect the quarterback. Joe Burrow is sneaky athletic, but he takes a lot of sacks and does not have elite scrambling ability to avoid sacks. Generating pressure without sending a blitz will be important for the Titans to stop the Bengals' passing attack.

Where the Titans are extremely strong, however, is their run defense, allowing the 4th lowest yards per attempt in 2021. The Bengals will be forced to throw the ball constantly and although this is their bread and butter, will sometimes result in shorter possessions.

Offensively, the Titans are finally coming into form. Securing the #1 seed was crucial for the Titans, mostly because of the bye week. This has given their injury-riddled team extra time to rest and recover for this matchup. The Titans are getting Derrick Henry back, which is bad news for all opposing defenses, especially a middle-of-the-pack run defense like the Bengals.

Let’s not forget, with Henry, AJ Brown, and Julio Jones healthy, this is a Titans team that beat the Chiefs, Bills, and Colts twice. With their star players down, the Titans have simply asked too much of QB Ryan Tannehill, who kept them in contention for the #1 seed, without his supporting cast.

Derrick Henry and company will obviously bring more points, but will also bring more first downs and longer possessions for the Titans. Think of how the Patriots control the clock under Bill Belichick, committing to the run and keeping their defense off the field. The Titans have the personnel to go turbo and win through the air, but their best chance of victory will be keeping opposing offenses on the bench.

Best Bet for Bengals at Titans

The Bengals will not have a coaching advantage in the matchup with the Titans and Tennessee will certainly be much more efficient on offense. I would think a more fair line in this one would be Titans -4 or so, so getting the number at -3 is ideal. There were some markets that opened at -2.5 but that number has surely gone from the marketplace.

I think that the public will bet the Bengals through the weekend and continue the narrative that the Titans are not a good team. The Titans played like a shell of themselves for over half the year and I’m happy to take the rested, undervalued team in this matchup.

Side note: I am playing this game on top of futures money tied up in the Tennessee Titans. It doesn’t make sense to hedge here (it rarely does) and I think this line has value by itself at -3.