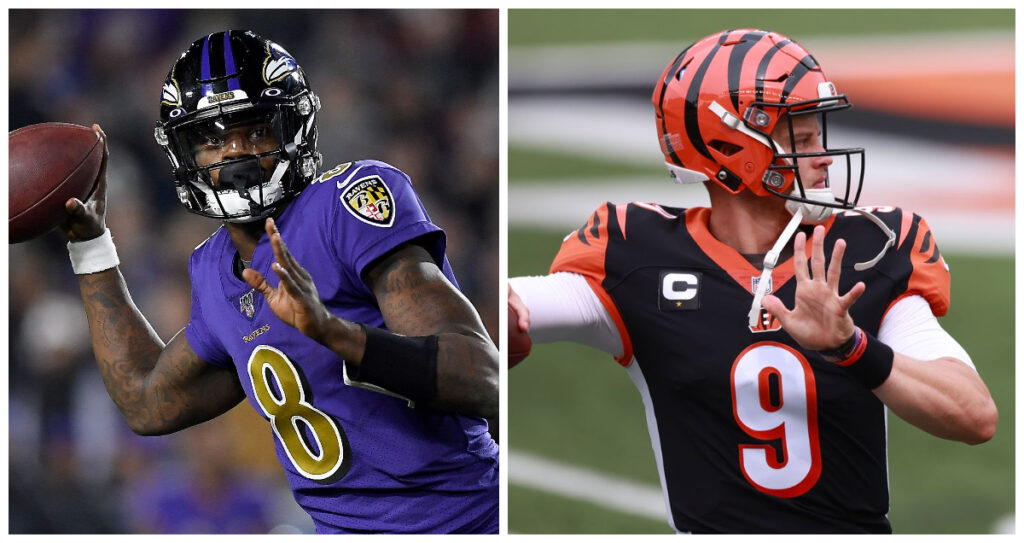 We think Lamar Jackson and Joe Burrow will both put on a show and that the total will go Over on Sunday Night Football.

One of the NFL’s most exciting rivalries takes over Sunday Night Football as the Ravens take on the Bengals. It’s a juicy QB match-up between MVP frontrunner Lamar Jackson and Joe Burrow. It also presents a juicy “revenge game” quality as the Bengals swept the Ravens last season in dominant fashion (however, Lamar Jackson was a DNP for one of those games…damn you, COVID).

The Ravens have played well on the road but have beaten up on weaker teams like the Patriots and Jets. The Bengals are coming off of an impressive win against the Dolphins, even though the previously undefeated ‘Phins were without Tua Tagovailoa for two and a half quarters. On paper, this is a prime time worthy match-up. Here are our 2 best bets for Bengals at Ravens.

I love taking the Bengals as underdogs here for many reasons. One: I’m fading the Ravens' defense. While they lead the league in forced turnovers, they have been surrendering an ungodly amount of yards, specifically through the air. According to Pro Football Reference, the Ravens have given up the most yards through the air this season.

The Bengals' passing game has gotten off to a slow start but has increasingly gotten better over the last two weeks, including Burrow’s first 300+ yard passing performance of the season last Thursday against the Dolphins. Cincy's offense is starting to iron some things out, which should spell trouble for Baltimore's secondary.

I believe the Ravens will still put up some points themselves but still trust that the Bengals' defense will do a better job of at least keeping them off the board at home. The Bengals will cover the three and a half but sprinkle a little something on the moneyline at +145 odds for good value.

Last week’s points fest between the Chiefs and Buccaneers taught me that maybe the early trend of the primetime games going under was purely circumstantial. This game feels like the perfect storm for an over.

The Bengals put up 41 points in both contests last season and this year, the Ravens are giving up even more yards through the air. It’s also a good sign that the Ravens have the number three scoring offense so far this season.

While the Bengals' defense ranks well in many categories, they haven’t necessarily been tested by great quarterback play as the QBs they have faced so far have been: Mitch Trubisky, Cooper Rush, Joe Flacco, one and a half quarter of Tagovailoa, and Teddy Bridgewater.

Jackson is clearly the best QB they will have faced this season and will put a dent in some of those defensive numbers. I like the Ravens to score a lot of points, I like the Bengals to take advantage of a struggling pass defense, and I REALLY like the over here.