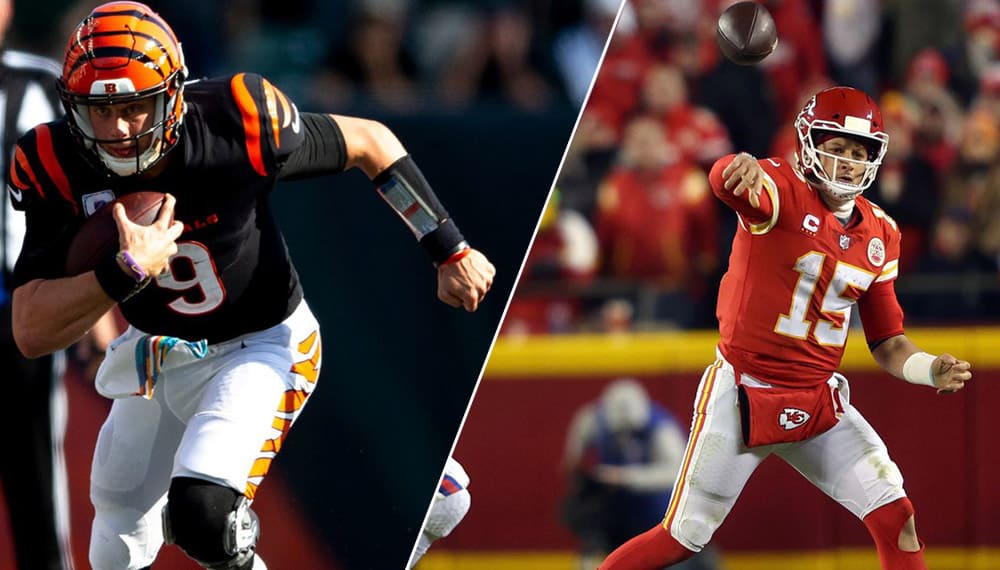 Before we jump into our breakdown, let's look at the current odds and best number available for both sides and the total in this AFC Championship matchup:

The Path to the AFC Championship

I would be reminded to start writing about this upcoming game between the Kansas City Chiefs and the Cincinnati Bengals without acknowledging the insanity of last Sunday Night football. The shootout between the Chiefs and the Bills was the game of the year and probably the most entertaining game we’ll get this postseason. The Chiefs are on top of the world right now and this article will look to consider if the Bengals can knock them off their throne.

The surprising Bengals have won two straight games in Joe Burrow’s first playoff run, beating the Raiders and then the #1 seed Tennessee Titans. Looking back on that game it’s easy to applaud the Bengals for stopping Derrick Henry, but the Bengals also needed some good fortune to be able to win that game.

I’ve never heard of a game where a team allows their quarterback to be sacked nine times and still comes away the victor. The Bengals offense only scored one touchdown against a less than stellar Titans defense. Going into that game, we are expecting the Titans to put pressure on Burrow, which they did, and keep the offense from putting up points, which they also did.

The difference-maker in the game was Tannehill’s three interceptions, two of which came on bobbles/tipped passes. The Titans' offense, especially Tannehill, played under expectation versus a suspect Bengals defense.

Don’t expect Patrick Mahomes and company to run into a similar problem against this defense.

Can the Surprise Bengals Pull Off Another Upset?

I think many people will be enticed by the Bengals at +7, especially coming off the Bengals Week 16 victory over these Chiefs. The Bengals closed at +3.5 or +4 at home against the Chiefs, so it’s actually not surprising to see them at +7 on the road in a playoff environment.

In their previous game against the Titans, one would think the Bengals could air it out against a weak secondary that doesn’t send much pressure. Instead, they only scored one touchdown and allowed Burrow to be sacked nine times. Perhaps the Bengals are just in over their heads.

I believe that the Chiefs will win this game against the Bengals and the line at 7 seems just right. At -6.5 I would consider the Chiefs and at +7.5, the Bengals would be a better play. If you happen to like the 49ers in the NFC, I would consider a teaser with the Niners at +9.5 and the Chiefs at -1, essentially just needing them to win the game. Now, just because I think the Bengals go down, does not mean they will go down quietly.

Burrow Ready for the Big Stage

Ironically, one of the most tired angles in this game is the “Arrowhead Noise” angle that has been floating around the media. Arrowhead Stadium has taken the crown from the former CenturyLink Field, home of the Seahawks, as the loudest arena in football. There were even reports that the Bengals were practicing with extremely high “game noise” playing through speakers in their practice facility.

If Joe Burrow has shown anything in his young career, it’s that he does not lack confidence. Burrow won a National Championship at LSU, playing in the SEC, home of some of the biggest and loudest stadiums in the country. Burrow’s swagger, poise, and talent should all make a raucous crowd an afterthought and something he’s experienced before.

I think that the Bengals' offense will actually have a much better performance than they did against both the Raiders and the Titans, yet they will still lose this game.

The total opened at 53.5, which I found to be way too low and bet immediately. Their Week 16 matchup closed at a total of around 51 but played to a final score of 34-31 Bengals. The books clearly adjusted but did they adjust enough?

We all know what the Chiefs are at this point, in reference to their elite offense and paltry defense. However, are the books properly evaluating the Bengals defense versus Patrick Mahomes and the Chiefs?

Perhaps Vegas is putting too much emphasis on the Bengals stellar play within the division. They beat both the Ravens and the Steelers twice, however, neither of those matchups truly feature an elite passing attack. Lamar Jackson’s skills speak for themselves, but he still isn’t an elite passer, and actually only appeared in one of the two games against Cincy. The Bengals were beaten by pass heavy attacks such as the Packers, the Chargers, and even the Mike White Jets.

Joe Burrow, Jamar Chase, and Tee Higgins are going to need to do wonders in the passing game, just to stay competitive against this Chiefs offense. I happen to think that will be the case during Championship weekend and think this game plays into the high 50’s or even mid 60’s rather than go under the current total.

This line has moved to 54.5, but shop around as some books may still have a 54 available. This number is still playable at 54.5, but a much stronger play at 54 or 53.5. I also believe this total can only go up as there is likely to be no injury news that changes the total, or big bettors rushing to take this total under.