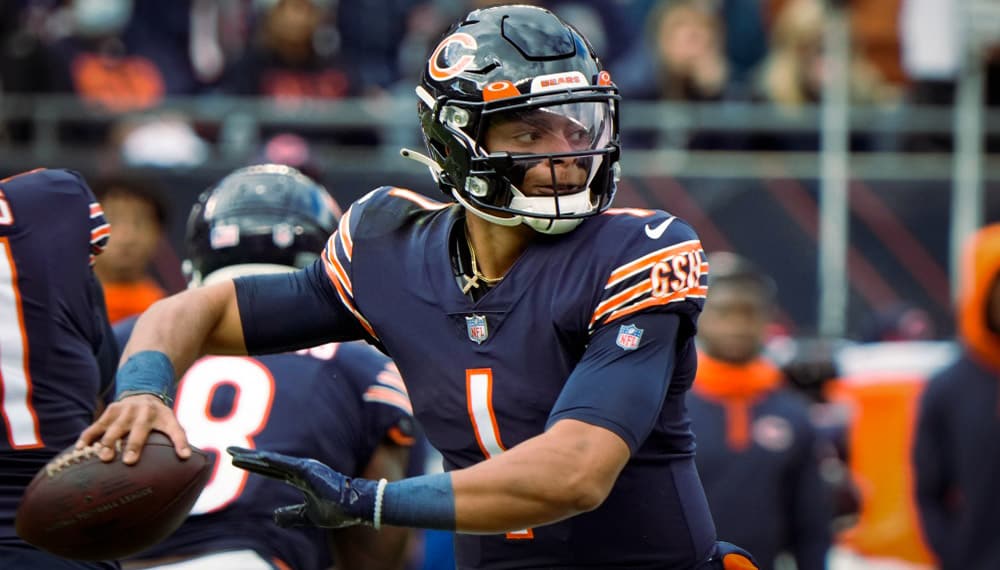 The Week 9 Monday Night Football matchup between the Bears and Steelers features two teams moving in opposite directions. The Steelers enter Monday night on a three-game winning streak, while the Bears come in on a three-game losing streak. Neither team has been lighting it up offensively with the under cashing in 11 of their last 14 games.

The glaring problem for the Bears heading into tonight's matchup is the run defense. Chicago started the season giving up under 100 rushing yards per game, but have allowed over 160 per game over their last three. That could be a recipe for disaster against the Steelers, who have averaged 32 rushing attempts per game while allowing only 16 PPG during their three-game winning streak.

Will these trends hold up and create a game script that allows Steelers and under tickets to cash once again tonight? Before we share our thoughts, let's take a look at the best available number for each side and the total.

Bet $1 on Monday Night Football, Get $100 from PointsBet

For the first time this season, we have a consensus across all US sportsbooks for tonight's spread. Every book has the Steelers as a touchdown favorite. At the time of publishing, Unibet Sportsbook was offering -106 juice on each side of this bet, making them the most bettor-friendly sportsbook for this matchup.

Chicago Struggling on Both Sides of the Ball, While Pittsburgh Continues to Improve

While we have already highlighted the issues Chicago has had stopping the run this season, the offense is doing the defense no favors. As a team, Chicago grades out 24th in total DVOA including a 29th grade on the offensive end.

While Justin Fields can flash his lively arm at times, he is still only averaging a 6.1-yard average depth of target only throwing for first downs on 32% of his passes. The receiving core averages just 9.6 yards per reception reaching first downs only 50% of the time. The biggest issue is that the team’s #1 offensive weapon, wide receiver Allen Robinson has zero chemistry with his quarterback. Robinson caught only three passes on four targets last Sunday for 21 total yards.

We also have to note injuries to LB Khalil Mack and the running back core in general with David Montgomery & Tarik Cohen both on the sidelines and Damien Williams playing through a knee injury. Besides defensive tackle Tyson Aluallu and WR JuJu Smith-Schuster both being on the IR, the Steelers are mostly healthy heading into Monday Night football.

Pittsburgh QB Ben Roethlisberger was serviceable in week 8 with a 64.7% pass completion rate for 266 yards and a touchdown. Big Ben hasn’t thrown an interception since Pittsburgh’s game against Green Bay back on the 3rd of October. The 39-year-old also graded around league average for three straight games which is certainly a step forward compared to his start of the season.

We have to give a lot of credit to the receiving core of Pittsburgh coming off another overall solid game. Over 63% of Pittsburgh’s yardage in the passing game came after the catch. The star of Pittsburgh’s Week 8 outing was WR Diontae Johnson with 98 total yards on six receptions, but three other players (Claypool, Freiermuth, and Gentry) caught 3 or more passes in the game.

We are taking Pittsburgh and laying the points. The Steelers don’t have a great ceiling, but they are healthy & have a huge coaching edge on the side. This is also the team in this matchup that has some floor at least. Early action did move this line out from Pittsburg -5 to Pittsburgh –7 but we simply can't recommend betting the Bears given their lack of offense and inability to stop the run.

Chicago's offense has become entirely reliant upon its run game and is getting a ridiculously low 127.4 passing yards per game on the season. You simply can't go into Pittsburgh and expect to beat them with a one-sided attack like this. We don't see any way Chicago gets to 14 points in this matchup, and given the fact that the defense has allowed nearly 33 PPG over their last three, this one could be over by halftime.

After hitting 7 of our last 8 prop bets, Sunday night was an absolute disaster for us. We expected the Rams to shred the Titans secondary, forcing Tennessee to play from behind and, in the end, simply got the game script wrong. We think we have a pair of Monday night prop bets that will right the ship and gets back on another heater.

Getting Harris at 83.5 rushing yards is an absolute gift... the fact that it is juiced at -113 on both sides just makes it an even sweeter play. As we mentioned earlier, the Bears have allowed 160+ rushing yards per game and 5.5 yards per carry over their last three. Harris has averaged 98 rushing yards per game over his last three, and that includes games against Seattle and Cleveland who are top 5 in the league in YPC over the past month. He has also averaged over 24 attempts per game over that stretch. If he gets to 24 carries tonight he is a lock to get to the century mark and sail past the 83.5 yard prop.

Johnson's props have been skewed over the past month because of an outlier game against Denver where he caught 2 passes on 2 targets for 73 yards and a touchdown. In his other 5 starts he has averaged over 12 targets per game. The real question is if you play the receptions number (6.5) or yards number (73.5) with Johnson tonight. The Bears allow just a 67% completion rate to wide receivers (top 10 in NFL) but are giving up 7.4 yards per attempt. They also gave up 11.5 YPA to the 49ers last week. This gives Johnson a predicted yardage total somewhere between 88 and 138 yards for tonight, both well over his 73.5 yard prop.