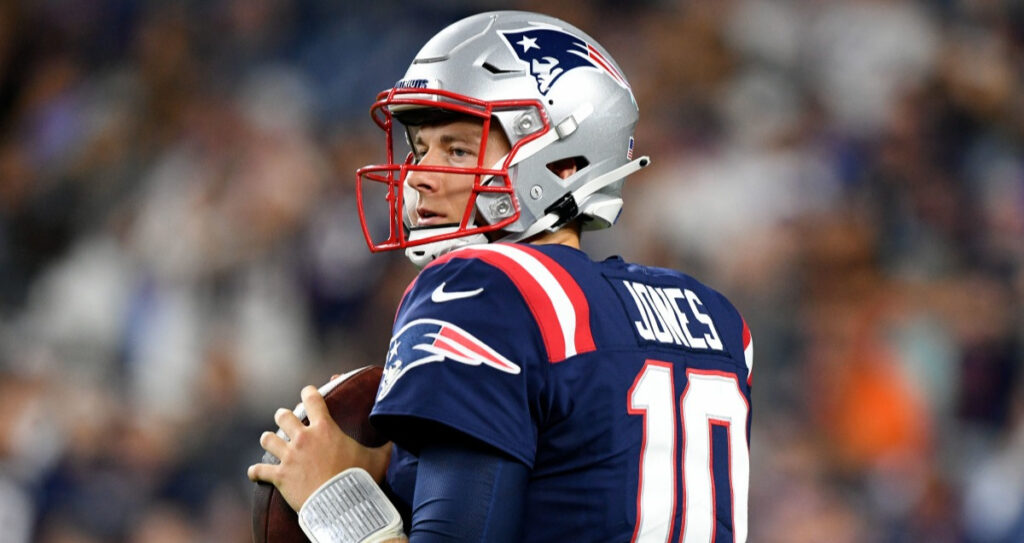 Mac Jones is back in action tonight, but we don't see him throwing the ball very much against the Bears on Monday Night Football.

What's good fellow sports bettors? We hope you had a fantastic football weekend. Our NFL player prop bets went 2-2 on Sunday, with Zeke Elliott costing us a winning day by finishing 7.5 yards shy of his rushing yardage total.

While that was definitely a bummer, our overall record is still pretty solid at 30-18. We've found some positive EV opportunities to exploit in tonight's Bears at Patriots matchup. Here are our 3 favorite PrizePicks props for Monday Night Football.

Since this is Jones' first game back from injury, you have to wonder how much the Pats coaches will let Jones throw the ball. New England only averages 28.8 passes per game, which ranks 27th in the NFL. Since Jones is just coming back, we're thinking we see a steady diet of Rhamondre Stevenson and Damien Harris.

Another reason we like this play is game script. Since the Patriots are such heavy favorites, they may not have to pass the ball very much late in the game. This makes it hard to envision Jones throwing 29 or more passes.

Chicago ranks 26th in the league in yards per rush allowed and 31st in rushing yards allowed per game. Those two stats alone tell us that Jones should be handing the ball off quite a bit to exploit Chicago's main defensive weakness.

Stevenson has been the new workhorse for New England since Damien Harris went down with a hamstring injury. The former Oklahoma star has easily gone over this yardage total in four straight games. We think Stevenson keeps that streak alive tonight, even though Harris will be back on the field.

Even with Harris back, you have to wonder just how many carries he'll get. Our guess is that the Pats will be a little on the cautious side, which should mean that Stevenson will still get the lion's share of the carries.

New England ranks 5th in EPA per rush while Chicago ranks 25th in defensive EPA per rush. The Pats are also an 8.5-point favorite in this game, so Stevenson may get lots of carries late just to run out the clock. This looks like an easy Over!

We like Montgomery's skill set, but he's been pretty inconsistent so far this season. It makes us wonder if the knee injury Montgomery suffered earlier in the year is still bothering him. The former Iowa State Cyclone has gone Under this yardage total in three of his five games in 2022.

Another reason we like this Under has to do with the emergence of Khalil Herbert, who is getting more and more snaps on third down. Herbert has a little more get-up-and-go speed and the Bears may choose to use him more in this game if they fall behind by a lot of points.

There's also a ton of inherent value in this number. Almost every sportsbook in the market has Montgomery's yardage total at 50.5. That may not sound like a big deal but we're getting about 5% of true line value at PrizePicks.

Best of luck with all of your Monday Night Football action! Let's sweep the board tonight!