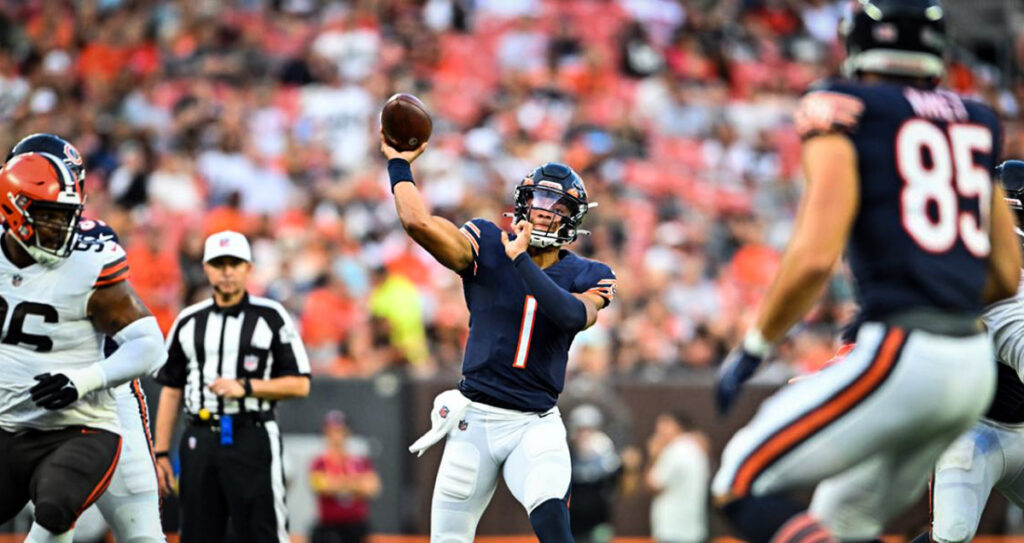 We expect Justin Fields and the Chicago Bears to keep Sunday Night's game within a touchdown and cover the spread.

One of the oldest rivalries in the NFL takes center stage for Week Two’s rendition of Sunday Night Football. The Packers and Bears began the 2022 season with completely different expectations. The Packers seemed to still be favorites to win the division and contend in the NFC.

I mean, who wouldn’t feel great about their team when you have the two-time reigning NFL MVP taking snaps under center? The Bears, on the other hand, are clearly still in rebuilding mode after a 6-11 season and seemingly no real upgrade in the offensive arsenal to help out second-year QB Justin Fields. The Bears seemed destined for a last-place division finish.

But Week One always does a unique job of making you second guess every preconceived notion you had about a team going into the season. The Packers got a front-row seat to the Justin Jefferson Show (9 catches for 184 yards and 2 TDs) and were served with a 23-7 loss while the Bears pulled off a 19-10 upset against one of the favorites to win the NFC (49ers) in a waterlogged, soggy Soldier Field.

The pass catchers (while also missing Allen Lazard with an ankle injury suffered during training camp) produced at an alarmingly low level. Running Back A.J. Dillon led the team in targets and Aaron Jones was tied for second. The highest target share recipient among wide receivers was Romeo Doubs at 12.5%. The Packers' offense sputtered and kept them out of the game against Minnesota.

The Bears, on the other hand, won ugly. In Matt Eberflus’ first game as the Chicago Head Coach, his defense dominated. They sacked 49ers QB Trey Lance twice and collected four hits on the young signal caller, making him more than uncomfortable.

They were also opportunistic and forced a key fumble of Deebo Samuel in the red zone early in the game to avoid an even bigger early deficit than they already had to overcome. Justin Fields and the offense weren’t great, and quite frankly, still not very good (only 3.6 yards per play with four of their 11 drives resulting in three-and-outs) but they did just enough to win the game.

Like the defense, they were opportunistic when they had to be and had some luck come their way when Fields found a wide-open Dante Pettis on broken coverage for a 51-yard TD.

Week One can be funny that way. But with 17 weeks to go in the season, what separates truth from falsehood? When both of these teams clash at Lambeau Field on Sunday Night Football, one will want to convince themselves (and America) that the opener was a mirage while the other tries to prove that 2022 isn’t the daunting rebuilding project most think it will be.

The line opened up with the Packers as 8.5-point favorites. In the few hours since then, it has already jumped to 10. I try not to overreact to Week One and by the looks of it, the betting public isn’t overreacting to the demise of the Packer offense.

However, I am not the public, and I am a true believer that the loss of Adams will have a seriously negative impact on this unit as the season unfolds. I still really like the Packers to win, just not big.

I know the Packers have won their last six against Chicago in this series. I know they covered the spread in all six of those games with one line being as high as 11 points by kick-off. I know Aaron Rodgers proudly proclaimed to the Chicago faithful that he “owns them” in their last meeting.

That said, giving up 10 points for a team that struggled that mightily to be efficient in the passing game and without the best WR in the league and with Lazard possibly out again, feels like a stretch, even for a 4-time MVP at the helm.

What makes this game closer than 10 points will be the Bears' defense. They still can generate pressure and force turnovers and should replicate that against the Packers considering Green Bay still isn’t confident in David Bakhtiari’s return for this game. According to NFL Next Gen Stats, the Packers' offensive line only gave Aaron Rodgers an average of 2.57 seconds to throw which ranks them in the bottom ten of the league.

The history and trends tell you to hammer the Packers here. But without Davante Adams, I simply don’t have enough faith in the Packers receiving corps (which saw Doubs as the leading wide receiver with only four receptions for 37 yards) nor their offensive line to separate themselves that much against a good Bears defense. I also don’t trust the Bears' offense to generate enough points to win the game outright. Gimme the points!

ATS Betting Trends for the Spread:

I just spent the last bit of this article trashing the Packers' passing game and offensive output. I can easily do the same for the Bears' passing game. It wasn’t like Fields lit up the 49ers defense and it certainly wasn’t like David Montgomery was Walter Payton.

The Bears averaged less than six yards per pass and less than three yards per rush. Again, the Bears' success on Sunday was more about being opportunistic than being efficient.

However, the one thing the Packers offense actually did well was run the ball. Aaron Jones picked up almost ten yards per carry and A.J. Dillon rushed for almost five yards per attempt, but the circumstances of the game forced them to abandon the run earlier than expected.

The underwhelming showing of both offenses and the competence of the defenses already gives me a natural inclination to hammer the under. The history of these teams in the past year and in this rivalry since 2019 gives me the same feeling.