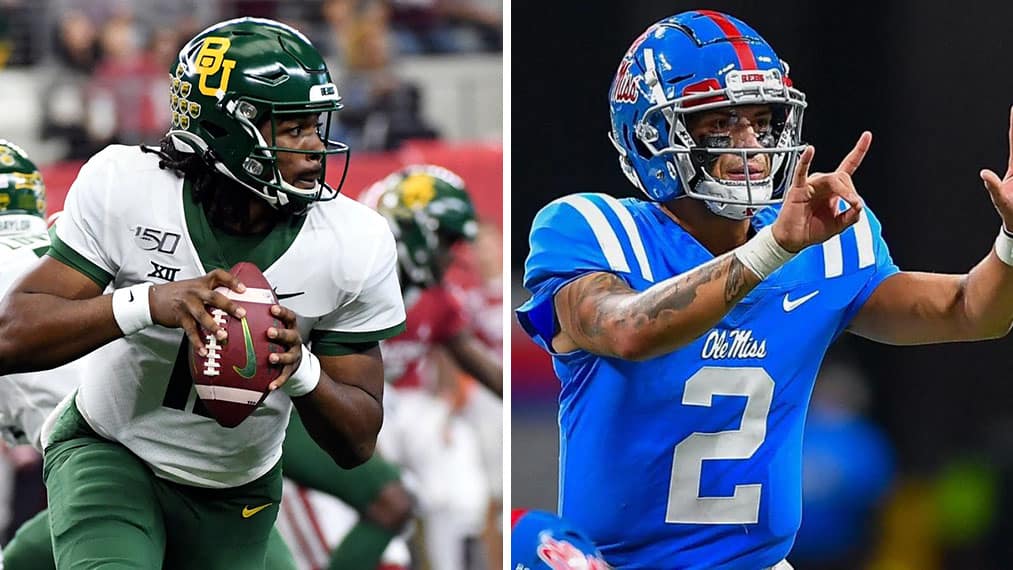 The final New Year’s Six Bowl game should be loads of fun to watch as the Baylor Bears will take on the Ole Miss Rebels. The kickoff is set for 8:45 Eastern Time on New Year’s Day. Will the Rebels’ potent offense reign supreme or will the Bears’ stingy defense be too much for Lane Kiffin to handle?

The line on this game is somewhat interesting since, at the time of this writing, you could bet on either team at a plus number. BetMGM Sportsbook has Ole Miss +1 while FanDuel is offering Baylor +1.5. Here is a closer look at the live odds for this Sugar Bowl matchup.

What to Expect from the Baylor Offense in the Sugar Bowl

QB Gerry Bohanon is still dealing with a hamstring injury but all reports say he should be ready to play. The 6-3 junior had an efficient season by throwing for 2,160 yards and 17 TDs. Bohanon can be tough to defend on the ground as well, as evidenced by his 9 rushing TDs.

As a whole, Baylor’s offense did not put up any eye-popping numbers this season. However, the Bears run a balanced attack that ranks 34th in EPA per play and 35th in yards per rush. Baylor’s most dangerous offensive weapon is RB Abram Smith, who has run for 1,429 yards and 12 TDs this season.

The Bears don’t pass the ball very often (109th in pass play percentage) but when they do, defenses have to look out for Tyquan Thornton. The 6-3 senior has hauled in 61 receptions for 946 yards and 9 TDs this season. If the Ole Miss defense starts to crowd the line too much, Bohanon will be looking to get the ball to Thornton on some deep routes.

The Rebels have improved quite a bit on the defensive side of the ball. The secondary has done a much better job this season of limiting the big play, as they only give up 7.1 yards per pass (41st). Ole Miss’s best defensive back is A.J. Finley, who leads the team with 3 INTs (one was a pick 6).

Ole Miss is still suspect against the run, however, as they rank a putrid 126th in EPA per rush allowed. That could be a huge problem since Baylor averages 40.3 rushing attempts per game. The Rebels will look to hold the Bears to several field goal attempts with their bend but don’t break type of defense.

Sam Williams is one of the most underrated pass rushers in the country. Williams has racked up 12.5 sacks this year and that has helped the Rebels’ defense rank 24th in QB sack percentage. Baylor may have to bring an extra man over to Willliams’ side of the ball just to keep him out of the backfield the entire evening.

Unlike most big-name players, Matt Corral is not opting out of his bowl game. The 6-foot junior has grown by leaps and bounds as a QB since Lane Kiffin arrived in Oxford.

Corral has had a wonderful season by throwing for 3,339 yards and 20 TDs. He’s also scored 11 times on the ground. The Baylor defense could have a tough time defending Corral once he gets outside the pocket.

Though most folks believe Kiffin runs an aerial attack, Ole Miss ranks 10th in the nation in rushing attempts per game (44.8). Jerrion Ealy has sprinter type of speed and has run for 703 yards and 5 TDs. Will the Ole Miss ground attack be able to do any damage against a stout Baylor run defense?

What to Expect from the Baylor Defense in the Sugar Bowl

It doesn’t seem like that long ago that Baylor was one of the worst defensive teams in the Big 12. Times have changed in Waco, as the Bears rank 16th in points per game allowed and 15th in yards per rush allowed. Baylor’s best run stopper is safety/linebacker Jalen Pitre, who has 17.5 tackles for loss.

As a whole, the Bears have a very solid defense. However, this unit has struggled in the red zone at times this season. Baylor ranks 94th in red zone scoring percentage allowed.

The Bears have been suspect against the pass, as they rank 65th in yards per pass allowed. That’s not too surprising though when you consider how pass-happy the Big 12 is as a conference. Baylor’s best player in the secondary is safety J.T. Woods, who has three INTs.

Our Sugar Bowl Pick: Under 55 Points

Though most people still associate Ole Miss with high-scoring games, 9 out of the Rebels’ 12 games have stayed under the posted total. The Rebels’ fast pace offense does scare us a bit but the Bears have enough defense to slow them down.

Don’t be in any rush to bet this, as the public will probably keep betting the Over and driving the number up. All five of Ole Miss’s road games stayed Under this season. 4 out of Baylor’s 6 road games also stayed Under.

Unders aren’t nearly as fun to bet as Overs, but most of the time that’s where the value lies. We’ll take the Under and root for some defense. Best of luck with all your New Year’s Day bets!