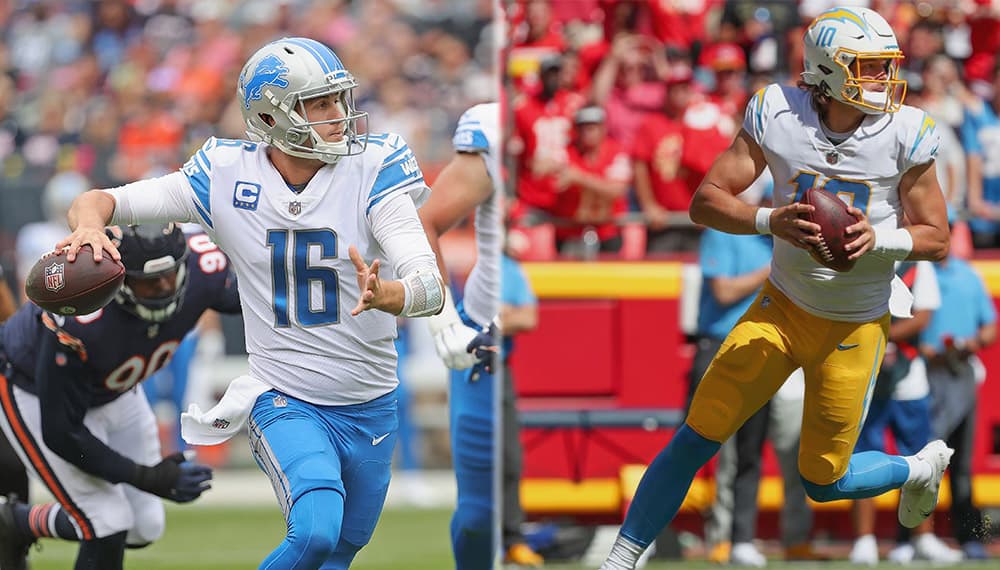 Back These Two Underdogs in Your NFL Week 6 Bets

It’s Week 6 of the NFL, what I like to call the end of the “wanna-be” sharps. After Week 5, the NFL schedule has officially “set-in”. Modelers are starting to use in-season data for their analysis. Sportsbooks have quickly corrected any way-off pre-season power rankings.

We all know those people who have a hot start to the season and think this is finally the year they will turn a profit in the NFL. After the bloodbath that was Week 5, it’s extremely important to stay consistent and stay true to what works.

PointsBet is offering all new players an instant $200 bonus with any $20 NFL or CFB wager this week. Here is how to lock in your $200 bonus:

The Detroit Lions are just having one of those seasons. They are 0-5 under rookie head coach Dam Campbell, although there is a strong argument that they should be 3-2.

They lost a heartbreaker in Week 5, after taking the lead with 30 seconds on the clock, before the Vikings hit a game-winning field goal with zeros on the clock. The Lions have now lost two games this season on 50+ yard field goals (including Justin Tucker’s record-setting field goal, which by the way, should have been a delay of game.)

Week 5’s loss says a lot more about the lack of execution from the Vikings than anything else. That being said, I feel the Lions have been consistently undervalued by the books. Catching +3.5 at home against the Cincinnati Bengals feels like a steal.

Home field advantage is essentially non-existent for most teams in the NFL, but a +3.5 spread implies that the Bengals would be favored by 4.5-5 on a neutral field and up to 5.5 or 6 at home. The Bengals are simply not that many points better than the Lions.

I think the Bengals are a team to look at as due for some regression. Joe Burrow and company have compiled a hard-fought 3-2 record that I don’t see holding up. I’ll spare you from a breakdown of one of the strangest games in NFL history, where the Bengals and Packers missed FIVE straight game-winning field goals in Week 5.

The Bengals are currently 10th in the NFL in weighted DVOA, largely powered by the 5th overall ranking in defensive DVOA. This feels somewhat backward, as most expected the Bengals to struggle defensively.

The 2021 Lions have shown that they do not struggle to move the ball up the field, but they have struggled to finish drives. In Week 4 against the Bears, they turned the ball over on their first three drives, all in goal-to-go scenarios. (Two fumbles and one on downs.)

Dan Campbell is not a coach I would describe as savvy but his hyper-aggressive style has accidentally walked the Lions into halfway decent game management. The play design and reliance on Jared Goff could certainly use some work, but the aggressiveness on fourth down has kept the Lions in almost all of their games. +3.5 points is way too much against the Bengals. I expect Dan Campbell to get his first win soon and there’s a good shot it’s this week, at home.

This game needs far less of an explanation in my opinion. Everyone should be looking at this line and questioning how it could possibly be this long. I bet the Chargers on Monday at +3.5, which was especially egregious. Here at +3, there is still value on the road dog. (You might still find a +3.5 if you shop around.)

Are we watching the same game? I think the Ravens' miraculous comeback on MNF saved this line. The Ravens absolutely should have lost that game after falling behind 22-3 in the fourth quarter. Lamar Jackson and that offense played out of their minds in that fourth quarter, with Jackson finishing over 500 yards of total offense.

Despite Jackson’s heroics and incredible play, the Ravens still should have lost that game. Down eight, the Ravens blocked a Rodrigo Blankenship field goal that would have made it a two-possession game. After scoring and converting for two, the Ravens tied the game at 25-25 with 40 seconds on the clock. Carson Wentz led a drive down the field that put Blankenship in a position to kick a game-winning 47 yarder, which he missed wide left.

Naturally, the Ravens got the ball in overtime and scored the game-winner. Jackson’s herculean comeback effort should have fallen short in this game and the Ravens are lucky to escape with the victory.

On the other hand, the Chargers perhaps played the game of the year against the Cleveland Browns in Week 5, getting the victory 47-42. I said this on The Noise Podcast and I’ll say it here again. There is a chance that Brandon Staley is the best coach in the NFL.

The difference between Staley and most other coaches is that he coaches to win in every single scenario, where some coaches just play not to lose. Staley and the Chargers converted two huge fourth-down plays in the second half on 4th and 7 and 4th and 8, both in traditional field goal scenarios. The Chargers combine both next-level talent in Justin Herbert as well as optimal game strategy and decision-making from their head coach.

While Lamar Jackson and John Harbaugh are great, they simply don’t stack up against the Chargers. With the Chargers on the road, I see this game as a pick'em or perhaps Baltimore -1. Catching 3 or 3.5 here is ridiculously off and is a must-play based on numbers alone.

You could argue this is a letdown spot for the Chargers and that the Ravens narrowly escaped their let-down spot on MNF against the Colts. While that narrative may be true, the numbers point towards the Chargers as the play in this one.