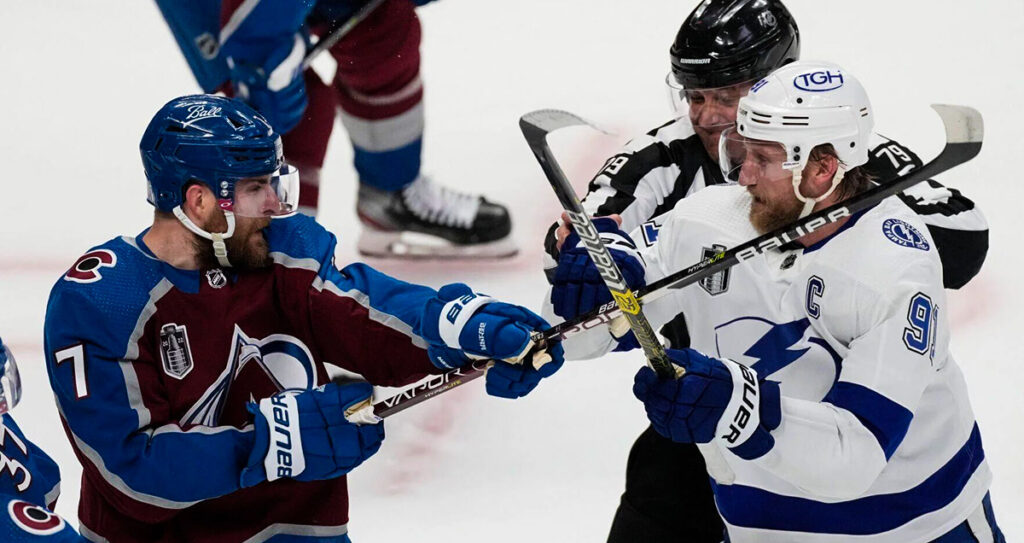 The Lightning enter game 3 as a slight home favorite against a hot Avalanche team.
By Bill Christy on June 20, 2022

The Colorado Avalanche emphatically took a 2-0 lead in the 2022 Stanley Cup Finals on Saturday night with a 7-0 win over the Lightning. For the second series in a row, Tampa Bay finds themselves heading home down 0-2 and in a must-win spot.

After losing 6 of their final 7 games in the regular season, Colorado has looked unbeatable in these playoffs, winning 14 of 16 games, and 7 straight. Will the champs rally on their home ice to make a series of this, or is Colorado simply too hot? We will take a look at the live odds and share our best bets and player prop picks for game 3 in this article.

It should come as little surprise that bettors have struggled to figure out what exactly to do with this pivotal game 3 matchup. Colorado (-265) is the heavy favorite on the puck line, while Tampa (-110) remains a slight favorite in the game. The total for this game opened at 6 on Saturday and hasn't moved since. Here is a look at the live odds and best available numbers for this game:

Game 2 was as ugly as it could possibly get for Tampa and their backers. The only good thing was that there was no sweat, this one was over midway through the 2nd period. The Avalanche have not lost a game on the road this postseason. They just dominated the last game 7-0 and look to be unbeatable. That all being said, this Lightning team has been in this situation before. They were down 2-0 to the Rangers and people began to write them off. It seems this Tampa team plays best when they have their backs against the wall, and they sure are in that spot here. Vasilevsky was lit up and will need to have a much better showing and we believe he will do just that.

Books have done a solid job pricing props for this series, nailing the number on several occasions, and game 3 is no exception. That being said, we think we have identified two value player props on the Lightning side worth considering for Monday night's matchup.

We are going juicy here but believe it is worth the risk. Killorn was held shotless last game but that may be a good thing. The last time he was held shotless, he followed that up with 4 shots on goal the following game. He is averaging 2 shots per game over the last 10 games, for this to continue, he will need at least 2 here in Game 3.

Hedman has 15 points in the playoffs to date. Of those 15, 13 of them came via assist. We are expecting the Lightning to put up a few goals on the scoreboard here after being shut out last game. Hedman is -155 to register a point in this one but the value lies here on the assist.

We are going to dabble in the SGP here for Game 3. Avs did just put up 7 goals at home but that is not likely to be repeated here. The Avs have put up numbers on the road this postseason and have only been held under 4 goals in 3 of those road games. It becomes 4 games after Monday night. Tampa has not been held under 2 goals at home all postseason. They will bounce back from being shut out last game and net at least 2 here. Both teams are averaging under 1 goal per game in the 1st period and the same can be said for what they give up on average in the 1st. After a 3-goal 1st in Game 2, the fast start will be slowed in this one.