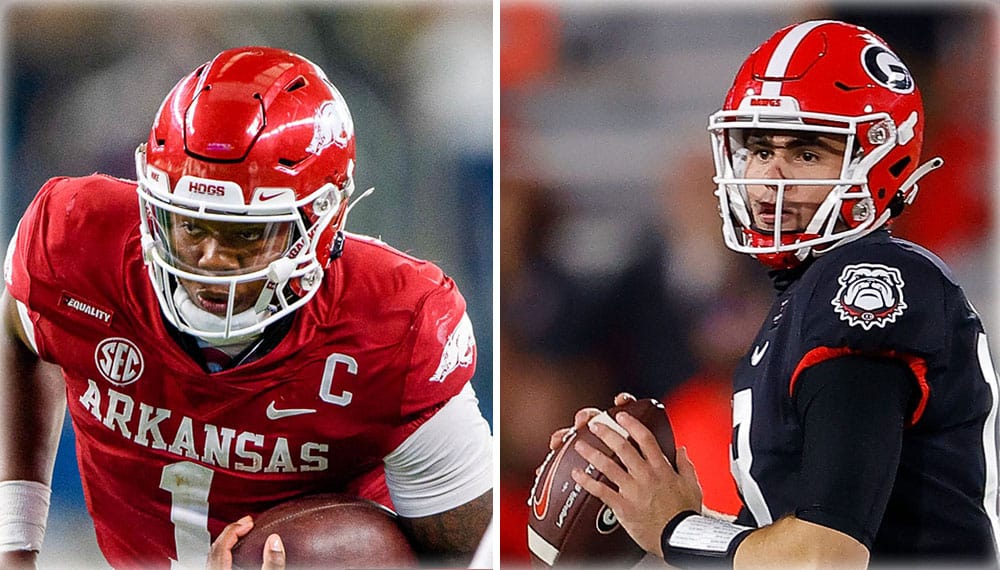 After a Week 4 college football slate that had only a few marquee matchups, Week 5 offers several Top 25 games for sports bettors to keep an eye on. None are bigger than this epic SEC matchup between #8 Arkansas and #2 Georgia.

Kickoff is set for Noon Eastern Time and will be televised on ESPN. Both teams come into this clash with perfect 4-0 records. Let’s break down the offense and defense of each squad and provide our best bet pick for this top 10 thriller!

New players that register using the promo code BVFBMULTI1 can lock in a $200 bonus on any $20 College Football wager. Just follow these steps:

Shockingly, the folks who make the odds are not expecting a close game as Georgia is favored by 18.5 at most online sportsbooks. This is a bit surprising, especially since Arkansas has two impressive wins over both Texas A&M and Texas! The total is currently sitting at 48.5 points.

Before placing a bet on this massive SEC battle, be sure to pull up our free odds checker. This will help you find out which online sportsbook is offering the best odds on your wager. Here is a live look at the best odds for the Georgia Bulldogs vs Arkansas Razorbacks.

What to Expect from the Arkansas Offense in Week 5

What a difference the right head coach makes! Sam Pittman should be a serious contender for Coach of the Year for the way he has turned around the Arkansas program in such a short time! He has this team playing with a newfound intensity, toughness, and focus.

Arkansas QB KJ Jefferson has made huge strides as an SEC signal-caller. The 6-3 245 pound sophomore has racked up 844 passing yards, six touchdowns through the air, and two scores on the ground so far this season. Jefferson suffered a bruised knee last week against Texas A&M but is listed as probable to play on Saturday against Georgia.

All-American wide receiver Treylon Burks is also a little bit banged up but is also expected to play this week. Burks has had a solid start to the season with 373 receiving yards and two touchdowns. A nice surprise for the Hogs has been the emergence of running back Trelon Smith, who has 298 rushing yards and three scores.

What to Expect from the Georgia Defense in Week 5

The Bulldogs are blessed with arguably the best overall defense in all of college football. Georgia is one of only four teams in the nation that has yet to allow a rushing touchdown! This stingy defensive unit also leads the country in points per game allowed (5.8). Head coach Kirby Smart and defensive coordinator Dan Lanning love to send their linebackers on delayed blitzes and it’s worked out well so far this season.

Linebacker Adam Anderson leads the team in sacks with three while the team as a whole has registered 14 sacks and 23 tackles for loss. The secondary is no slouch either, as they have already picked off seven passes. Senior defensive back Christopher Smith leads the team with two interceptions (one he took back for a TD).

What to Expect from the Georgia Offense in Week 5

The Bulldogs offense started the year with a lackluster outing against Clemson. However, veteran QB JT Daniels was dealing with an oblique strain that was affecting his arm strength on all of his deep passes. Daniels looks to be fully healthy now and he’s accumulated 567 passing yards and five scores.

Stud tailback Zamir White is off to a great start so far by running for 207 yards and a couple of scores. James Cook has also proven to be a viable threat in the running game, as he’s racked up 123 yards and two touchdowns. Can this Georgia offensive line create enough space for these two dynamic backs?

What to Expect from the Arkansas Defense in Week 5

Arkansas has improved by leaps and bounds on defense in a short time. Before the season began, nobody would have thought that the Razorbacks would hold Texas A&M to only 10 points and Texas to only 21. This is obviously not the same unit that ranked 99th in the nation in points per game allowed last season.

The Arkansas defense currently ranks 11th in the country in points allowed per game (14.5). Tre’ Williams leads the team in sacks with four and he’ll need to put some pressure on Daniels if the Hogs are going to pull off the outright upset. The secondary has also improved a great deal as two defensive backs (Jalen Catalon and Montaric Brown) each has two interceptions.

Our Pick: First Half UNDER 25.5 Points

If we were forced to pick a side in this one, we would take the large number of points with the Hogs. However, Georgia’s rush defense is so stout (only 66 rush yards per game allowed) that it makes us worry about the Razorbacks’ ability to score points.

Our favorite bet for this game is the first half Under! We know this is a huge matchup and both sides will be jacked! However, this is a Noon Eastern Time kickoff and both teams could start out a bit sluggish on the offensive side of the ball.

We see this as similar to a heavyweight boxing match where the two fighters spend a couple of rounds just feeling each other out. Both teams love to run the football so the clock should keep moving. Both teams also play outstanding defense so that should also help our cause for the Under.

In what should be a low-scoring game (especially in the first half), give us the UNDER 25.5. Best of luck and enjoy the game!