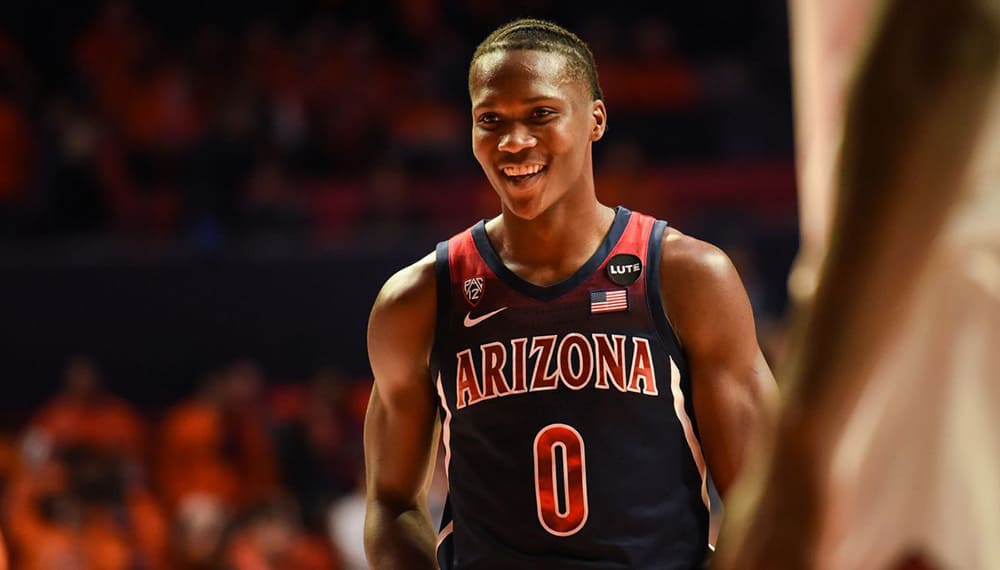 It doesn’t get much bigger than this for fans of the Pac-12. Two storied programs, rich with tradition, both ranked inside the top 10, and sit one-two in the conference standings; will meet Tuesday night in a game that will keep most east coast hoops fan wide awake into early morning hours of Wednesday.

The Arizona Wildcats, 16-1 on the season and a perfect 6-0 in Pac-12 play take their #3 ranking to Pauley Pavilion where they will meet the #7 ranked UCLA Bruins. Oregon is the lone blemish on the Pac-12 record for the Bruins who are 5-1 and 13-2 on the season. Only then #1 Gonzaga handed the Bruins their other loss.

Arizona could be without their second leading scorer, Azuolas Tubelis, who is questionable with an ankle injury. Coming of a season high 32 points against Utah, Tubelis left the game against Stanford after playing just seven minutes. The Cats will, however, have Bennedict Mathurin who leads them in scoring with 17.5ppg and is good enough to place him 3rd in the conference overall.

Speaking of top scorers in the conference, UCLA has the man who sits just above Mathurin on the points per game leaderboard. Johnny Juzang is having his best season yet with 18.3ppg and is shooting almost 47% from the field and over 38% from beyond the arc.

Arizona has had as good of a start to the season as they could have possibly imagined. And the way they’ve done it, has been with the fastest paced offense in the country. Their average possession length is only 14.5 seconds compared to the nation average of 17.7 seconds. They average 88.7ppg which is 2nd best in the country. But it is not just offense, the Wildcats rank 9th in adjusted defensive efficiency.

Arizona is coming off a 96-71 road win at California. They outrebounded the Bears 46-37 and held them to just 35.2% shooting from the field. Arizona made more free throws than the Bears attempted. It is always a good sign for a team that can get that done. Mathurin finished with 14 points, 8 boards, and 4 assists. Christian Koloko was the high man with 19 points, 13 boards, and 3 blocks. The Cats will look to control the pace and keep their winning ways going on the road Tuesday night.

Scary Hours on the Road for Bruins

UCLA has won three straight games but their last two have come by just five and six points. At Utah, the Bruins trailed by one at half but came back and made clutch free throws down the stretch to secure the win. Rebounding is going to be key in this game with #3 Arizona. The Bruins are as strong on the offensive glass as they are of keeping their opponents off the offensive glass. If they can neutralize the Cats from getting bonus opportunities and creating more for themselves, they can get the home win.

Their 71-65 win over Colorado on Saturday, the Bruins broke out to a 15-point lead at the half. Colorado crawled all the back and cut the lead to just one with less than two minutes left but a 9-4 run by UCLA closed them out. Johnny Juzang was sensational scoring 23 points on 9-18 shooting. Jaime Jaquez Jr was the only other Bruin in double-figures.

It should come as no surprise that the #3 Arizona Wildcats have been great against the spread this season, but it is their efficiency on the road that stands out in this matchup. Arizona is 4-1 ATS in their last five road games, while the Bruins have not covered a spread in their last five home games. Here are our four key betting trends for our best bet pick:

I think the fact that UCLA is a home dog here is very telling. In most scenarios where two closely matched teams are facing off, the home team is typically favored. I am backing the Wildcats here because they have arguably the most balanced team in the country. Their defense is almost superior to their offense which is one of the highest scoring teams in the country.

Arizona should force UCLA’s hand offensively. The Wildcats are the fastest paced team in the country and that will absolutely fuel the over. UCLA has gone over the total in 7 of their 8 home games this season. I believe both offenses will shine in a game that should be a ton of fun to watch. I see the Cats getting it done late pulling away in the latter part of the 2nd half around the same time as the total gets pushed over.