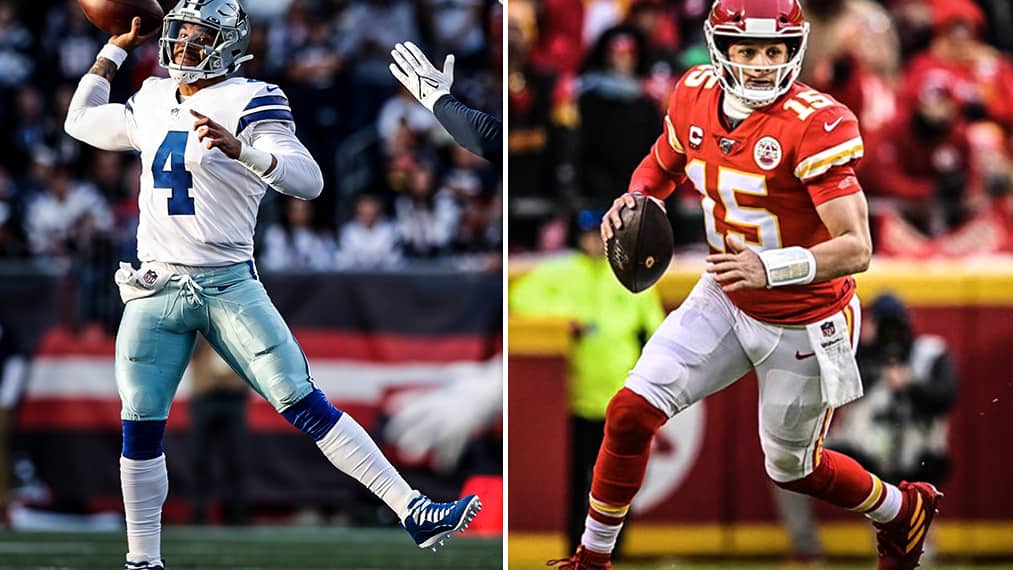 Are Sportsbooks Offering +350 Odds on an NFL Week 11 Lock?

This bet is currently available at +350 at FanDuel and +300 at DraftKings. We expect it to move to +200 or lower by kickoff so bet early!

While you could make the argument that both defenses are playing better as of late, both have really benefited from favorable matchups. The Cowboys beat up on a Mike Glennon-led Giants team and a Falcons team that has nothing going offensively right now.

The Chiefs' two best defensive performances of the year came in the last three weeks, one against the Giants playing without Barkley and Golladay (Shepard and Toney left early as well) and the other coming against the Jordan Love-led Packers.

When tested this season, both of these teams have given up plenty of points. Kansas City has allowed 29+ points to the Browns, Ravens, Chargers, Eagles, and Bills. The Cowboys have allowed 28+ to the Buccaneers, Panthers, Patriots, and Eagles.

Despite the defensive issues for both teams, neither team backs down from a shootout and the two have combined to play in 11 games that have finished with a total of over 50 points, 13 games of 46+ points.

Both Dak Prescott and Patrick Mahomes are coming off of strong week 10 performances. Prescott finished the Atlanta game with a QB rating of 127.9, completing just under 80% of his passes while averaging 9.5 yards per attempt. Mahomes racked up a QB rating of 127.6 in week 10, throwing for 406 yards and 5 touchdowns.

Could Any Game Challenge the Chiefs/Cowboys in Week 11?

This is where this bet moves from attractive to lock for us. The two closest totals on the board are the Colts at the Bills and Raiders at the Bengals, with the total sitting right at 50 points for both of those games.

Starting with the Colts at the Bills, these are two teams that haven't played a game over 50 points since 2001. The Colts defense is clearly a question mark but has played slightly better as of late, allowing only 20 PPG over their last 5 games. The Bills defense is arguably the best in the NFL and enters week 11 having allowed just 14 PPG over their last six games. There is simply too much defense in this one for us to see it as a serious contender.

The Raiders/Bengals game, however, is a legitimate concern. Both of these defenses have been atrocious over the past month, with the Bengals allowing over 30 PPG and the Raiders allowing just under 30 PPG. For us, we just don't trust either of these offenses the way we trust the Cowboys and Chiefs.

The Bengals lost to the Jets three weeks ago and managed only 16 points against the Browns before their week 10 bye. If anything, we trust the Bengals defense to use the bye to get right and back to the form we saw early this season, where they allowed just 18 PPG over their first four.

The Raiders managed only 15 PPG in their last two, despite facing the Chiefs and Giants, two teams in the bottom half of the NFL in scoring defense.