Alabama vs Texas - Betting Preview and Our Best Bet Pick 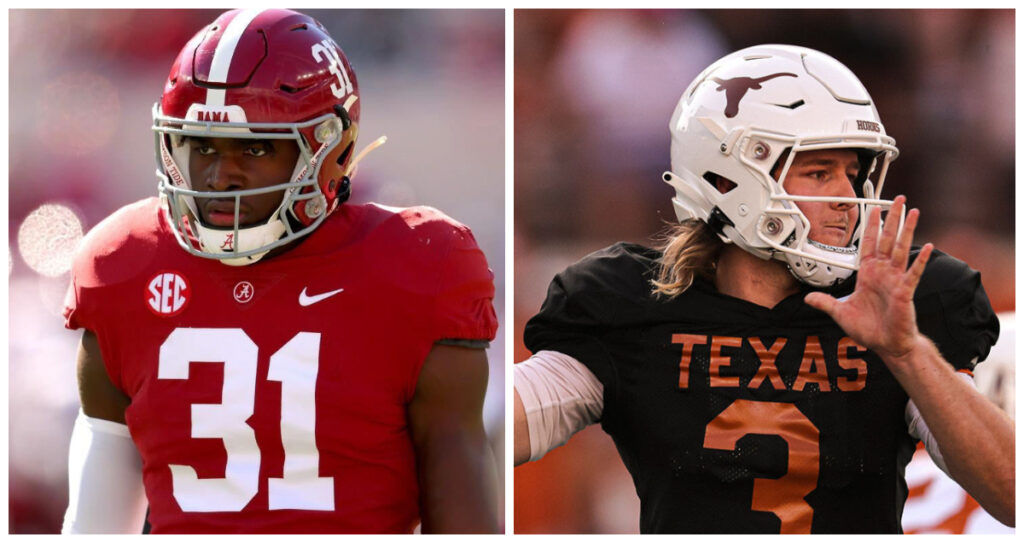 Will Anderson and the Alabama defense will try to disrupt Quinn Ewers and the Texas offense on Saturday.

Texas coach Steve Sarkisian knows first-hand how to beat his former boss. While coaching the University of Washington in 2009, Sarkisian led the Huskies to a 16-13 upset of the No. 3 ranked Trojans, the highlight of his tenure at UW.

More than a decade later and after twice serving on Nick Saban’s Alabama staff, Sarkisian is once again tasked with coaching against his former mentor. When asked Monday how the Texas Longhorns were treating their contest with the No. 1 ranked Crimson Tide, Sarkisian said it was a mistake to think this home game on Saturday would define the program.

Despite Sarkisian’s comments, a Texas-size upset of top-ranked Alabama would be a career-defining victory for the second-year coach and program-defining conquest for the Longhorns. Can the Crimson Tide roll into Austin and survive one of this weekend’s premier matchups?

What to Expect from the Alabama Offense vs Texas

A heavy dose of Bryce Young and the passing game. Despite winning the Heisman Trophy in 2021, this year could be even better for the 6’0” junior. Through less than three quarters of action, Young completed 18-for-28 passes for 5 TDs and 195 yards. Better yet, the QB set a new career-best rushing total as he carried the ball five times for 100 yards and a score.

The rest of the Crimson Tide offense is loaded with talent, too. All three starting wide receivers (Traeshone Holden, Jermaine Burton and Kobe Prentice) caught five passes each in the win, including four TD receptions.

What to Expect from the Texas Defense vs Alabama

Texas was dominant to start the season on defense and special teams against an overwhelmed UL-Monroe squad. Longhorn senior D’Shawn Jamison intercepted a third-quarter pass attempt and scurried 69 yards to give Texas a defensive TD, only the second time since 2017 that the Longhorns' defense has scored. Texas started the game by blocking a punt and returning it for a TD.

The LB tandem of DeMarvion Overshown and Barryn Sorrell pressured UL-Monroe the entire game. Overshown and Sorrell combined for 14 tackles, including 4 TFLs and 1.5 sacks in their season-opener. The Longhorns need this 1-2 punch to flourish behind their senior-laden defensive line in order to slow Alabama’s offense.

What to Expect from the Texas Offense vs Alabama

After starting 0-for-2 with an interception, Quinn Ewers admitted nerves played a role in his poor performance. Once he calmed down, the former Texas HS legend went 16-for-22 for 225 yards and a pair of TDs. His favorite target was TE Ja’Tavion Sanders, who caught six passes for 85 yards and a TD.

Longhorn RB Bijan Robinson had a stellar debut for the Longhorns. The junior scored twice as he ran for 71 yards on 10 carries and hauled in three passes for 40 yards.

The area of concern, however, remains the offensive line. Two true freshmen and a sophomore started the game.

The group was effective, but mistakes led to three sacks and Ewers moving around inside the pocket on pass protection. Those mistakes could be extremely costly for Texas this weekend.

What to Expect from the Alabama Defense vs Texas

Alabama linebackers in the backfield all game long. Having Will Anderson Jr - the possible top overall pick in next year’s draft - is helpful.

Yet linebackers Dallas Turner, Jaylen Moody, and Henry To’oTo’o were also impressive for the Crimson Tide. Combined, the starting unit totaled 17 tackles, 2 TFLs and 3 QB hurries in the season-opening shut-out.

The defensive backs were equally impressive. Utah State completed only 36% of its passes for 57 yards against the swarming Crimson Tide defense. Corners Kool-Aid McKinstry and Terrion Arnold locked down wide receivers all night with help from DeMarco Hellams and Jordan Battle at the safety position.

The only concern for Alabama is the defense was unable to turn their pressure into turnovers or sacks. The Crimson Tide did force three fumbles in the win, but the Utes recovered all three.

Nonetheless, Alabama was dominant in their victory. Utah State mustered only seven first downs against the Crimson Tide, and Alabama’s run defense gave up only 2.1 yards per carry on 37 rushing attempts.

A two-for-one special. Alabama head coach Nick Saban doesn’t lose often, especially not when his former assistants are on the other sideline.

In fact, Saban owns a 25-2 record against his former assistant coaches. In those 27 games, Saban’s Crimson Tide teams have won on average by 23.8 points per game, more than a field goal higher than the current point spread.

Opening at 59 points, the over/under line has climbed to 65.5 points at some shops. The confidence in going under on this point total is Alabama should keep Texas from scoring.

Don’t expect this contest to be a low-scoring or close game down the stretch. The Crimson Tide should win handily in a stout defensive showing over the Longhorns.