Alabama vs Tennessee - Betting Preview and Our Best Bet 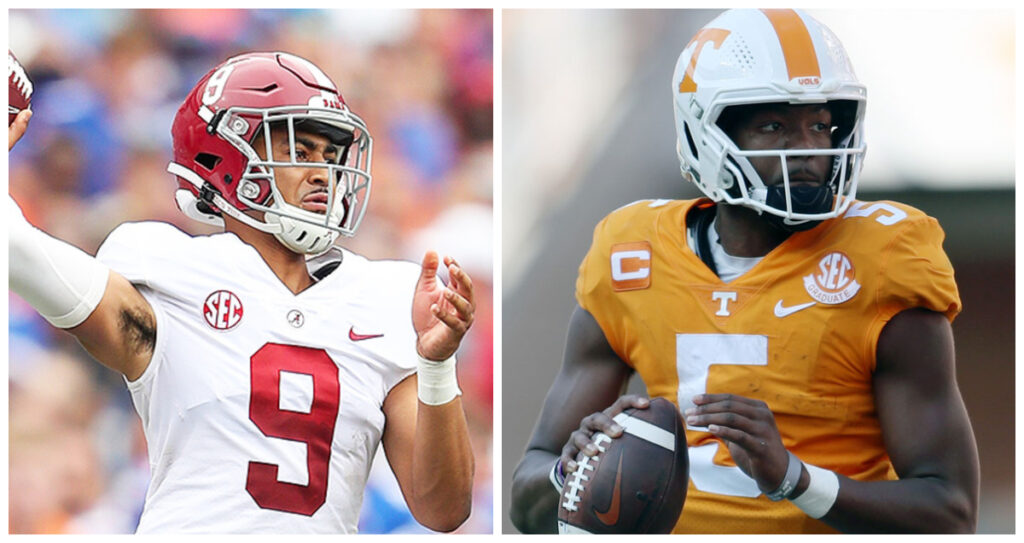 Alabama vs Tennessee will feature 2 of the nation's best QBs in Bryce Young (if he plays) and Hendon Hooker.

The most significant game on the Week 7 college football schedule is Alabama vs Tennessee. It’s been a while since the Third Saturday in October had this much significance, especially for the Tennessee Volunteers.

After losing 16 consecutive times to the Alabama Crimson Tide, the undefeated and No. 8 ranked Volunteers are riding high off wins over LSU, Pittsburgh, and Florida. The Vols want to prove their ascension up the rankings is legitimate.

For the first time in several years, Alabama also needs to win at Tennessee to prove its legitimacy as the top team in college football. After squeezing past Texas on the road and Texas A&M at home, the Tide are in need of a decisive victory over a proven opponent to ease pollsters' concerns about its No. 1 ranking.

Will Alabama or Tennessee prove its mettle and their position for SEC supremacy this weekend? Read on to see which team comes out on top in Knoxville Saturday.

What to Expect: Alabama Offense vs Tennessee

Legendary Alabama head coach Nick Saban said Monday that QB Bryce Young - last season’s Heisman Trophy winner - would be reevaluated this week to assess his chances to play against Tennessee. Most reports prior to the Tide’s 24-20 victory over Texas A&M suggested Young was held out as a precautionary measure as he’s dealing with a shoulder injury to his right throwing arm.

If Young cannot play, Jalen Milroe will start for the Crimson Tide. The dual-threat freshman QB from Katy, Texas, has been given a limited playbook in his first two weeks of action.

The results, as expected with freshmen starters, have been up-and-down for Milroe. While the QB passed for three TDs and accounted for nearly 200 yards of total offense, Milroe also fumbled twice and threw an interception against Texas A&M.

No matter who takes the snaps this weekend, the Tide will feature standout Jahmyr Gibbs prominently. The junior RB leads Alabama with 532 yards rushing on 64 carries while also catching 22 passes for 220 yards. In total, Gibbs has scored five TDs and collected more than 860 yards of offense and return yardage for the Tide.

What to Expect: Tennessee Defense vs Alabama

The Volunteers have leveraged immense defensive pressure into turnovers this season. Tennessee has created nine turnovers by pressuring opponents on 26% of their passes, getting pressure on QBs an impressive 58 times (14 sacks, 44 QB Hurries) in 2022.

The defensive line is leading that charge. Senior DL Byron Young has 10 QB Hurries to go along with 3.5 sacks while teammate Tyler Baron has a pair of sacks and four QB Hurries thus far. Additionally, LB Aaron Beasley is leading the team with 35 tackles, including 2.5 sacks and five QB hurries in 2022.

Tennessee’s vulnerability on defense has come when the Volunteers haven’t pressured QBs, however. Opponents are completing 61% of their passes overall for an average of 307 yards per outing. This is the trade-off for the Volunteers’ aggressive front seven: the defensive backfield is left in one-on-one situations that standout receivers have taken advantage of, especially in late-game situations when opponents are trailing.

What to Expect: Tennessee Offense vs Alabama

Tennessee comes into the game with one of the fastest offenses in the country, ranking first in the country with 548 yards of offense per outing. While the majority of their offense has come through the air (340 yards per game), the Volunteers prefer running the ball with nearly 60% of the plays called for their ground game.

Heisman hopeful Hendon Hooker leads the team, completing 70% of his passes for 1,432 yards and 10 TDs without throwing an interception. Hooker is also the team’s third-leading rusher, adding 231 yards rushing and three TDs for Tennessee’s running attack.

Expect to see a healthy dose of Jaylen Wright and Jabari Small against Alabama. The running back duo have split time in the backfield for Volunteers this season, combining for 625 rushing yards on 133 tries while scoring 10 TDs. Through the air, Tennessee WR Jalin Hyatt leads his teammates with 27 receptions for 388 yards and five TDs.

What to Expect: Alabama Defense vs Tennessee

The Crimson Tide will look to create pressure on Hooker and disrupt one of the nation’s fastest uptempo offenses. Will Anderson Jr - who currently sits atop most NFL mock drafts for 2023 - will be the primary culprit as the linebacker has five sacks and 10 total TFLs entering the game. LB teammate Henry To’oTo’o comes into the contest with a team-best 39 tackles with 3.5 TFLs among that total.

The largest concern for Alabama will be creating turnovers against the Volunteers’ passing attack. With half the season in the books, the Tide have only intercepted two passes this year while breaking up 24. These are not the elite numbers Alabama fans have come to expect from their defense.

While the lack of production from the backfield can be attributed to the defensive pressure up front - 18 sacks, 26 QB hurries through six games - the Tide will need more plays from the defensive backs to win this contest.

With uncertainty as to who will start for Alabama at QB, picking Tennessee to stay close or pull off the upset is the safest bet. Even with Bryce Young behind the center, the Volunteers are capable of keeping the game within one score.

An over/under at 65 is enticing on both sides. Alabama’s defense is elite, but so is Tennessee’s offense. The Tide have played in a similar game this season, and bettors wagering over in the Texas game remember the nearly 27-point shortfall in that game’s final score.

For Alabama to win, they’ll need to make the Volunteers’ offense settle for field goals. Tennessee needs to make this game a high-scoring contest in order to claim victory.