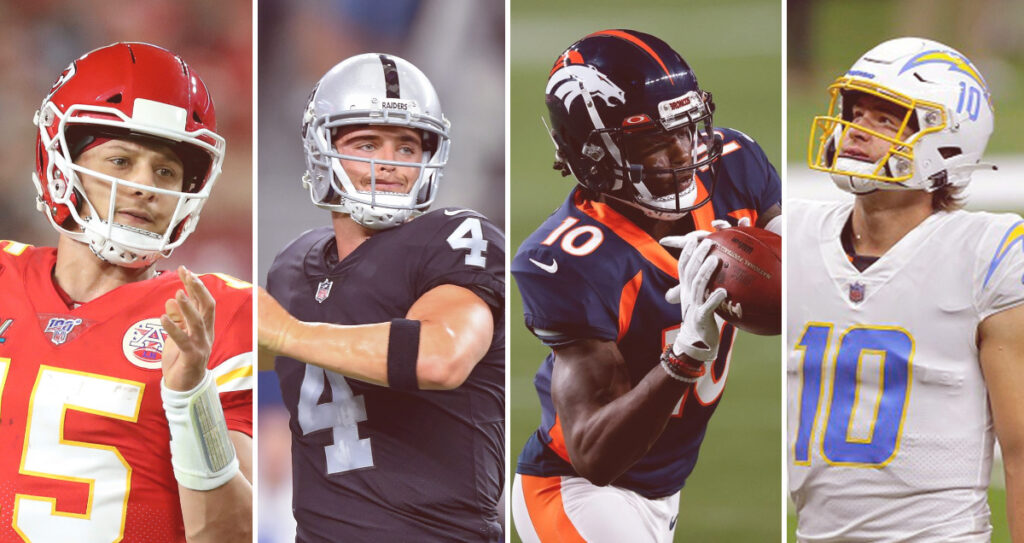 Let us take a look at the division had some of the biggest offensive names leave and join their new squads. The AFC West may have the best division for QBs with Denver adding Russell Wilson and Justin Herbert ascending to the upper echelon of QBs last season.

We believe the AFC West will be the best division in the league, but which team will reign supreme and conquer the AFC West? Let’s have a look at each team's respective records from last season as well as the odds for each team to win the division.

Even though they lost Tyreek Hill, the Kansas City Chiefs remain the favorite to repeat as AFC West division champs in 2022-23 (+175). However, the gap between the Chiefs and everyone else has shortened.

The Chargers are close behind at +225 and the Broncos are currently sitting at +250 over at DraftKings Sportsbook. The Raiders are the dark horse of the division (+650) even though they made the playoffs last season.

Justin Herbert put up some strong numbers last season but lacked a consistent rushing attack to balance the offense. The bigger issue for the Chargers was on the defensive side. They allowed 27ppg which was 29th in the league.

In the offseason, they lost their leader in tackles, Kyzir White but added veterans Kyle Van Noy and Khalil Mack. Their talent and their veteran leadership should translate to a change on the defensive side of the ball for the Chargers.

In a division that may go down as the best in the history of the league this season, we are siding with the Chargers. They addressed their main deficiency in the offseason and have young offensive weapons that will blossom even more this season. Herbert is a dark horse to win MVP (+1000) and don’t be shocked if we see that 27ppg from last year drop by a touchdown with the strides the defense makes.

The Vegas Raiders were a double-digit win team last year in one of the toughest divisions and made the playoffs for the 1st time since 2016. Unfortunately, they ran into the buzzsaw that was Joe Burrow and the Cincinnati Bengals in the opening round and were sent home early. It was amazing what the team was able to accomplish while there were numerous off-the-field issues that were distractions for the team.

The offseason was kind to the Raiders as they were able to secure a top 5 WR in the league and former college teammate of Derek Carr, Davante Adams. The addition of Adams and the subtraction of Tyreek Hill from the Chiefs puts the barometer near even in the aerial assaults of the AFC West. This squad is primed to contend for the division they have not won in 20 years.

The Chiefs were looking like a team destined to get another Super Bowl win in 2021-2022, but those dreams were dashed by the Bengals in the AFC title game. And if Chiefs fans weren’t down enough from that, they saw the biggest weapon at Mahomes’s disposal leave for the bright lights of Miami. The Chiefs did make a small splash in signing JuJu Smith-Schuster, who has the ability to be a strong wideout but lacks the speed and big-play ability they lost in Hill.

Kansas City is due to take a step back this season, not only the loss of Hill, but the loss of veteran Tyrann Mathieu on the defensive side will be tough to replace. The receiving core still has some guys that can really stretch the field and Travis Kelce is still one of the best in the game at tight end, but it will remain to be seen how JuJu fits and helps this team.

The Broncos have been searching for a quality QB since Peyton Manning retired back in 2016. Denver is hoping that the same formula that got them their Super Bowl win by bringing in the veteran Manning will work by bringing in veteran Russell Wilson. However, the weapons at Wilson’s disposal are quite inferior to Manning’s.

After a 7-10 season and the addition of Wilson, the trendy thought is that they will improve to a division contender, but we think otherwise. The ceiling for this team is right on the number for their total wins, and given the fact that Wilson is learning a new offense, we believe this Broncos team will struggle to reach that ceiling.

Our Best Bet: Under 10 wins