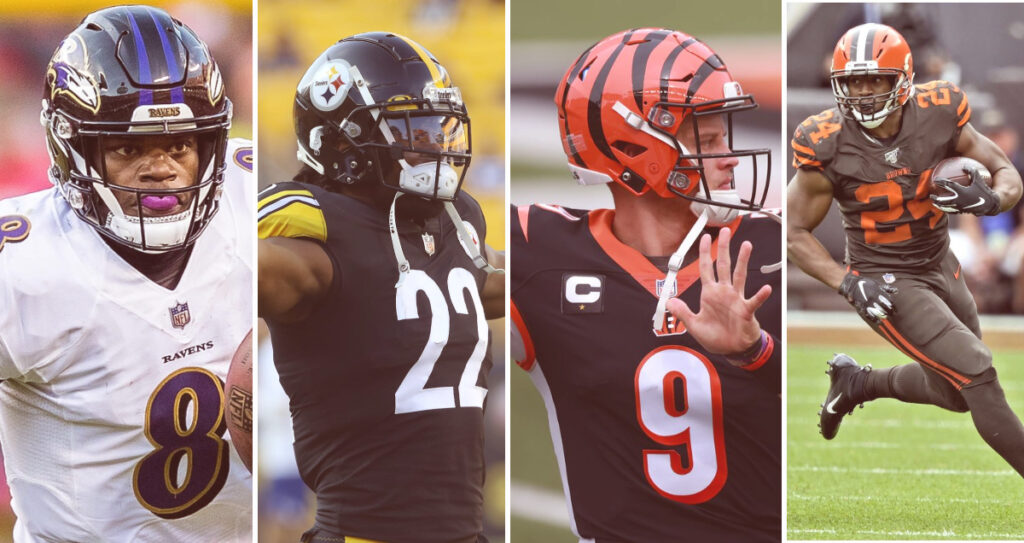 Check out the latest odds to win the AFC North in our Betting Preview.
By Bill Christy on June 23, 2022

The Bengals were able to capture their 1st divisional title since 2015, the Steelers bid farewell to their franchise QB, Cleveland added Deshaun Watson, and the Ravens look to rebound from a subpar 2021 campaign. Who will flourish and who will falter? Let’s take a look now:

We believe the AFC North will be highly competitive this season. Let’s have a look at each team's respective records from last season as well as the odds for each team to win the division.

Even though they had a lackluster season a year ago, the Baltimore Ravens are currently the favorite to win the AFC North crown for the 2022-23 season. The Cincinnati Bengals are right on their heels at +190 odds. Here's a look at the odds from DraftKings Sportsbook.

The Ravens of 2021 were hit by the injury bug at their most important position. QB, Lamar Jackson, the team’s leading passer and rusher was only able to compete in 12 games. His favorite target was his TE, Mark Andrews who grabbed 107 balls for 1300+ yards and 9 touchdowns. They missed the playoffs for the 1st time since 2017.

2022 will allow the Ravens to regroup and make a run at the division. Big Ben is in retirement; the Browns are up in the air at QB, which leaves just the Ravens and the Bengals with stability. We are expecting Lamar to come in extremely motivated and the Ravens to get themselves back into the playoff picture this year.

Joe Burrow successfully got the Bengals to the Super Bowl for the 1st time in 33 years and it took him just 2 years with the franchise to do so. JaMarr Chase emerged as one of the best young WRs in the league and Joe Mixon was able to pick up 1200 yards on the ground along with 13 touchdowns. Tee Higgins was able to provide a solid #2 option through the air.

The 2022 season will provide obstacles, as it does for any team coming off a Super Bowl loss. Throw in the fact that they are also an extremely young team and are facing a top 10 strength of schedule and the young Bengals may find themselves quickly regressing in this new season.

Our Best Bet: Under 10 wins

The swan song that was Big Ben’s final year did not end the way him nor the Steelers would have hoped. However, the dream scenario for a QB that played not far away during college, may have gotten started at the draft. The Steelers selected Kenny Pickett from the University of Pittsburgh, who they hope will be their next franchise QB. He inherits an offense that lost one of its top targets in JuJu but has a strong running attack led by Najee Harris.

The dream on draft day may play out more like a nightmare for Pickett this rookie season. It is never easy for a rookie QB and certainly not when replacing a legend like Big Ben. He will have his struggles and the team as a whole will do the same. We don’t expect much noise from this Steelers squad.

The Cleveland Browns seem to always have issues on the field, especially at the QB position. This year, the issues are occurring before their new QB has even taken a single snap. The Deshaun Watson drama has continued and left the Browns with some uncertainty as they head into this 2022 campaign. Baker is still waiting in the wings but his headspace is just as uncertain as Watson’s status.

The defensive side of the ball was actually a bright spot for the Browns and could be the same this coming season. Defense may be the only reliable piece of this Browns team. With all the question marks and eventual need to gel together, this team is one that we don’t feel comfortable backing this season.