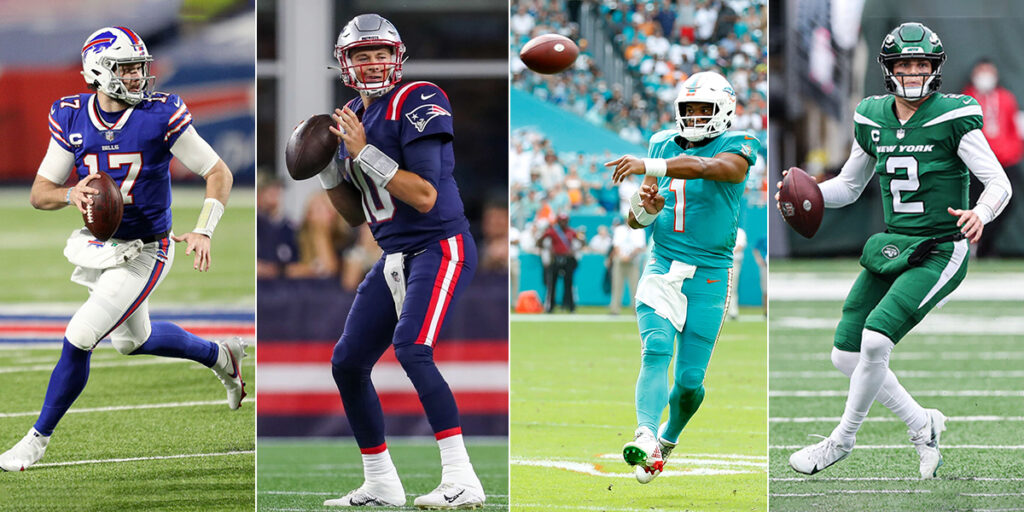 The Bills are not only the favorite to win the AFC East, but are the betting favorites to win the AFC and Super Bowl LVII.
By Bill Christy on June 20, 2022

The AFC East was a bit of a letdown last year, but there is some serious promise among the top 3 teams in the division. Buffalo will try to fend off the upstart Miami Dolphins and the rebuilding New England Patriots. Which one do we like? Have a look below:

Before we jump into the odds for each team in the AFC East, it is important to look back at how this division played out last season. The Bills won the division and knocked the Patriots out in the Wildcard round of the playoffs, but would lose to the Chiefs the following week in the Divisional Round. The Dolphins just narrowly missed out on a Playoffs birth last season, but were busy this offseason and look poised to take another step forward in 2022.

The Buffalo Bills enter the season as the 2023 Super Bowl favorites, so it should come as no surprise that they are the clear betting favorites to win the AFC East this year. The Dolphins' odds (+475) are just slightly better than the Patriots' (+500) in the East. Meanwhile, the Jets are in rebuild mode and remain longshots in the division (+2800) and conference (+7500).

The Bills Mafia was as excited as ever last season as they successfully repeated as division champions. After stumbling a bit to a 7-6 mark, the Bills picked up 4 straight wins to wrap up their regular season. They demolished division foe New England in the 1st round of the playoffs 47-17 but were unable to get past the Chiefs in the following round as they fell in overtime 42-36.

Von Miller is a perfect fit for the Bills' defense and should pay dividends on the field and in the locker room. Rookie, Kaiir Elam, will also slide into a starting role in the secondary and help beef up an already formidable Bills defense. Josh Allen and Stefon Diggs will continue their aerial assault this season and after slightly regressing last season, we see them getting back on track this year.

Our Best Bet: Over 12 wins and Division Champions -225 (Draftkings)

The Fins finished just above .500 last season after starting out 1-7 on the year. They were the hottest team in the 2nd half of the season and would have been a very dangerous team if they were able to sneak into the playoffs. Tua has been named the starter and has the fastest weapon in the league at his disposal now. Tyreek Hill brings a winning attitude and an ability to stretch the field like no other player in the league.

Speaking of speed, Chase Edmonds has joined the Fins from Arizona and will provide a dangerous pass-catching option out of the backfield. Edmonds had nearly 100 receptions over the last 2 seasons in Arizona. This Miami team could test Buffalo and New England for the division this year and should reach double-digit wins.

Our Best Bet: Over 9 Wins

Mac Jones had a successful rookie season and early word out of offseason workouts is that he is making major strides forward. The offseason is one thing but live action is another. The Pats added DeVante Parker who could provide a nice veteran presence for their receiving core. Damien Harris fell just shy of the 1000-yard mark but scored an amazing 15 touchdowns.

The Pats finished with double-digit wins last year but they face a tougher schedule in 2022. I am a big believer in Mac Jones and while the offseason talk could be over-hype, I feel comfortable trusting Bill Belichek and the Patriot ways. Peppers and Mitchell will provide depth to the defense and could be enough to help push this team past the 8.5-win total.

Zach Wilson was thrown to the fire in his rookie year and performed so-so. He was only able to complete 55% of his passes and tossed 9 touchdowns to go with 11 interceptions for a passer rating of just over 69%. It’s not like Wilson had a ton of weapons at his disposal last year, but that changed this offseason. The Jets added a veteran TE in CJ Uzomah and drafted arguably the best WR in the draft in Sauce Gardner.

After finishing with just 4 wins last year, the outlook does not look all that much better in 2022. We figure they are to be in the same boat this season and the chances of exceeding 6 wins are slim to none. Wilson should improve with his new toys but the team as a whole is still far from being competitive in this division.

Our Best Bet: Under 6 Wins