A Closer Look at the Odds for the 2022 Kentucky Derby 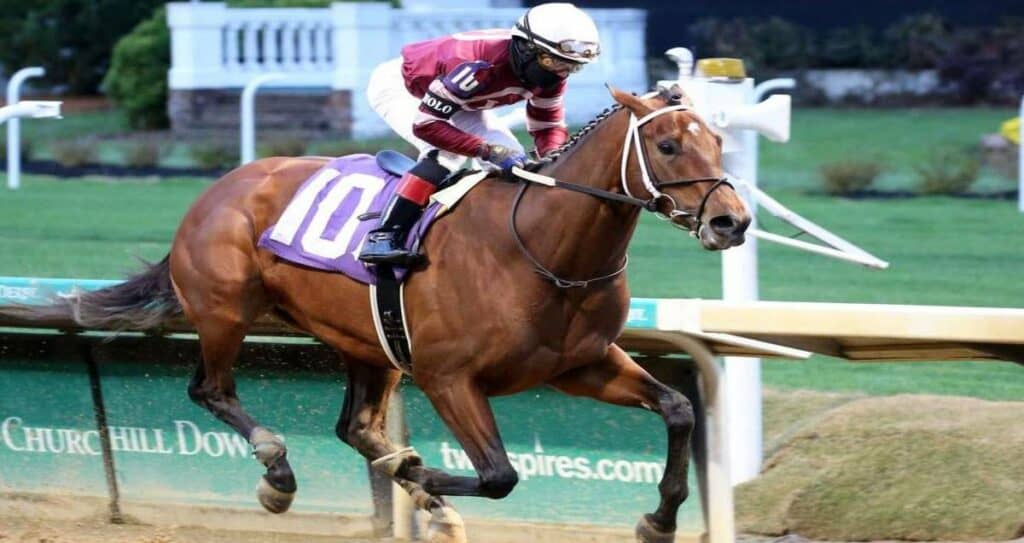 Epicenter is one of the betting favorites to win the 2022 Kentucky Derby.
By Michael Collins on May 4, 2022

Flowers have bloomed, the weather is warming, and Derby Day is back. May 7th will be the 148th running of the Kentucky Derby as trainers and jockeys look toward the most prestigious race in the sport.

The Triple Crown is in play for all horses in the field, fans are excited, and everyone is primed for the most exciting two minutes in sports. As of the morning of race day, Zandon sits as the favorite in gate, just slightly ahead of Epicenter who will race out of gate 3.

Here’s a closer look at the odds for the 2022 Kentucky Derby courtesy of our top-rated app DRF Bets who currently has the best available bonus offer for this first leg of the Triple Crown:

Record: 3-0-2
Mo Donegal has shown well in recent races with two wins and a third since the beginning of last December. Unfortunately, the rail position tends to finish out of favor, handicapping one of the more talented horses in the field.

Record: 1-0-2
A busy little colt, Happy Jack has raced three times since the start of February. Finishing third in every race, he’s showcased the inability to finish races. That paired with an inside position makes it hard to bet on the team from Calumet Farm.

Record: 4-1-0
Number one on the leaderboard and number one in our hearts, Epicenter is probably the most proven horse in the field for Saturday. He’s coming off back-to-back wins and four in his last five races. The third position hasn’t won since 1998, potentially mitigating the fastest horse on the track.

Record: 2-3-0
Summer is Tomorrow comes as one of the less proven horses in the field, but is also one of the most exciting. Showcasing strong speed out of the gate, he could find a favorable position next to the typically preferred fifth spot.

Record: 2-2-0
Coming up just short has become the expectation for Smile Happy after consecutive finishes in second place. He may hold the historically preferred position, but there are better horses at play this year.

Record: 3-3-0
Messier enters the field as one of the favorites thanks to how strong of a runner he’s been in the past. However, Santa Anita may have been the beginning of the end as he was bested by Taiba who holds a similar position on Saturday. Short odds and fading expectations mean Messier may not be the horse many expect him to be this weekend.

Record: 3-0-0
Crown Pride was close to history at the UAE Derby, becoming the second Japanese-trained horse to win. That same success has been elusive at Churchill Downs. Fit in a middle position, Pride could be a historic name to watch during those exciting two minutes.

Record: 1-2-0
Luis Saez could make all the difference at this year’s derby. Charge It comes into Saturday with only one stakes race under his belt where he offered an imbalanced run. He has all the potential, but Saez will need to guide him through the early mess to come out on top.

Record: 5-1-0
Tiz The Bomb is one of the most successful horses in the field this week. Tiz The Bomb is a successful horse on synthetic surfaces. This week is on dirt. Every year there is talk about how the different tracks will affect the racers, and his record on dirt simply doesn’t project well for Churchill Downs.

Record: 2-1-1
Everything is pointing at Zandon for good reason. He’s the second most successful horse in the field and holds a traditionally secure position at the post. However, the odds simply aren’t there. At 3-1, the payoff simply isn’t there for the craziness that comes on race day.

Record: 2-1-2
A late entry to the field, Pioneer of Medina may be more of a symbolic winner than anything. He’s looked uninspired in his last two races and lacks that impact factor you want to see out of a winner.

Record: 2-0-0
Taiba and Mike E. Smith pose one of the most exciting duos in the field. The inexperience shows in the chestnut-colored colt, but he showed his pace with a win at the Santa Anita Derby. If Smith can reign him in on derby day, and guide him through the cluttered middle pack, the 12-1 payoff is worth a speculative position.

Record: 3-1-2
Simplification has all the pedigree. The bloodline ties him to both champions and expectations. He demonstrated the ability to win at Gulfstream Park and is in a decent post position. The odds are there, but bordered by two strong runners, his ability to posture early will be handicapped.

Record: 2-4-1
A lot of people like Barber Road. He’s placed second five times, and while many commend his spirit, there are questions to be had about his ability to finish a race of this length. Enjoy the ride, but save the money.

Record: 4-0-1
It’s difficult to find a more exciting betting prospect in this race. White Abarrio has demonstrated he can win, coming off back-to-back victories (both at Gulfstream Park). The money is moving towards him with odds shifting from 12-1 to 10-1, and maybe it’s not worth overthinking. The 15th position has finished well in the past and should be in line for at least late recognition around the final turn.

Record: 3-2-0
Aside from the best name in the field, Cyberknife has shown the ability to improve between a sixth-place finish at Lecomte and winning at the Arkansas Derby. Like White Abarrio, the odds are getting shorter as he’s moved from 36-1 to his current position. The payoff is still there, and the outside post means he should have space to work.

Record: 3-1-1
A strong competitor, the length of this race is going to be an issue for Classic Causeway. He’s shown the ability to dominate at shorter distances on dirt, but the 11th place finish at Gulfstream Park makes it hard to believe this will be anything more than a show ride for him.

Record: 3-1-0
It’s difficult to put much faith in Tawny Port given his inconsistency on dirt. His victory at Keeneland simply isn’t enough to overlook his fifth-place finish a couple of months prior on a longer track.

Record: 2-1-0
Zozos is a fun watch. His massive win at Oaklawn Park back in February showed how competitive he can be. However, the lack of experience will be a challenge for Manuel Franco who just doesn’t have enough horse.

Record: 1-1-1
No real success on dirt means Ethereal Road is just someone to watch off the block. The bloodline may be there, but the performances have not. Race day update: Zozos has scratched from the 2022 Kentucky Derby.

Record: 1-0-2
Gets the call with Zozos scratch, however has finished just outside of the money in all 3 stakes this year. Did win his final two races of 2021, but is longshot to show in this tough field.

Record: 2-0-1
With Rich Strike now in the field, Rattle N Roll is next up with another scratch. Did win his final two races of 2021, but the outside draw will be too much to overcome (if called) and has yet to finish in the money in first three races of 2022.