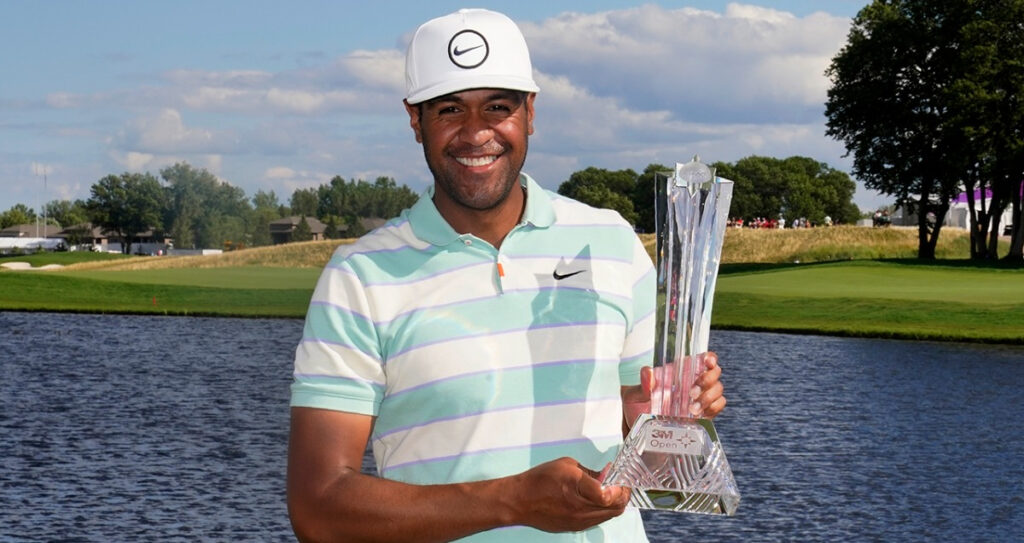 We think Tony Finau continues his hot streak at the 2022 FedEx St. Jude Championship.
By Bill Christy on August 10, 2022

After a big score on Norlander Top 40 two weeks ago, we outdid ourselves by giving out a +500-winner last week on our buddy Richy Werenski. It was not even a sweat as he finished the tournament in 13th place! Our other longshot, Rory Sabbatini had life as he made the weekend but fell to 61st in the end.

That fall paled in comparison to what Si-Woo Kim did to us by withdrawing after being in the hunt heading into Saturday. His +155 ticket went up in flames but our profitability certainly did not. Even if we would have lost our final play, we still would have finished in the black.

Lucky for us, Russell Henley decided to finish strong and get us another plus money ticket to cash as he finished inside the Top 20. This weekend, we will focus on strictly Top 40 plays. We have 4 guys that we believe will have solid chances after finishing below that number and all but 1 are in the plus money.

We do not have a long shot like the last 2 weeks, but we think these 4 will be more than enough to make up for that. And we are going to throw in 2 long shots for bogey-free 1st rounds. Here are 6 prop bets for the 2022 St. Jude Championship.

Best Odds on 2 of Our Prop Picks

Conners has finished inside the Top 40 at TPC Southwind for 3 straight starts. He has also finished in the Top 30 in back-to-back starts at the Open Championship and last week’s Wyndham Championship. In terms of stats, Conners is 35th in bogey avoidance and 21st in strokes gained on approaches.

While impressive, they don’t compare to his rankings of 4th in greens in regulation and 2nd in strokes gained ball striking. We expect Conners to be in the mix all weekend and the Top 40 finish being all but a foregone conclusion.

He is 6th on tour in greens in regulation and 12 in strokes gained in ball striking. Pendrith may be little known now but we love getting him at plus money for this play.

Mark Hubbard has failed to finish inside the top 40 in his 2 starts at TPC Southwind. However, he is 2nd in bogey avoidance and 25th in strokes gained on approaches.

He’s got 3 finishes inside the top 15 over his last 5 starts but also mixed in a missed cut and most recently a 51st finish. There is a risk here but we think the value makes the reward worth it.

Steele has risk as well, but we actually feel more confident in him than Hubbard. Steele has yet to play at TPC Southwind but has had some great recent starts. At the Travelers Championship, he finished 25th and at the RMC he tied for 30th.

He did miss the cut at the 3M Open but was spectacular at the PGA Championship, finishing 9th. While his worst statistical category of the 4 is bogey avoidance where he is ranked a pedestrian 54th, he ranks 10th in stroked gained in ball striking and 16th in greens in regulation. Steele has the talent to get a good finish here for his 1st trip to Memphis.

Best Bets for Bogey-Free First Round

We will keep these summaries short. Obviously, Finau and Im are two of the top players in the world which is always a plus for plays like this. Finau ranks 3rd in bogey avoidance and Im is 1st.

While that alone is enough to take a stab at these plays, we are also factoring in that they each land in the top 10 in 2 of the other categories and have recent forms to be desired. Finau has won his last 2 starts while Im has finished 2nd in his last 2. Let’s see if we can hit yet another long shot this week!