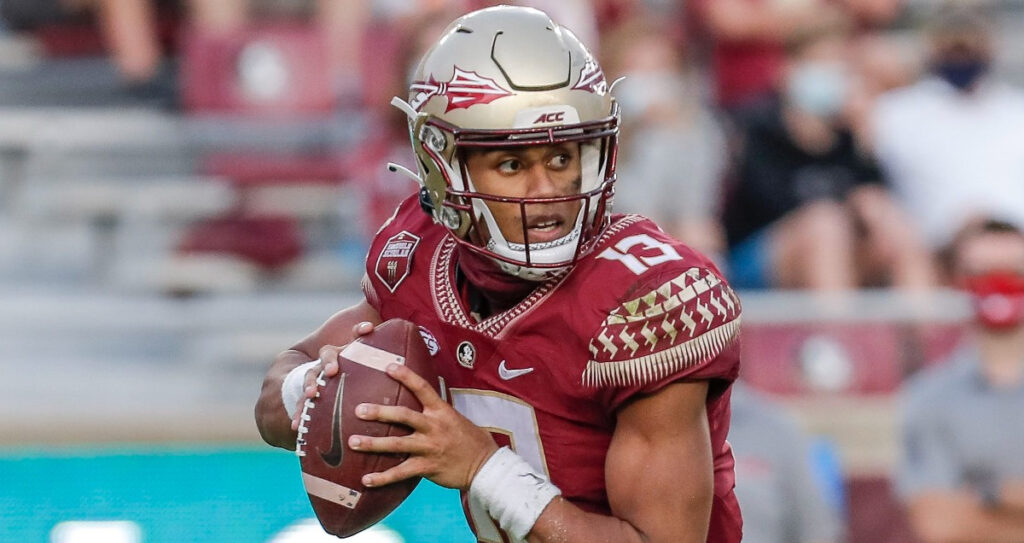 One of our 6 college football best bets is on Jordan Travis and the Florida State Seminoles.

One of the best parts of Thanksgiving is that there's football on TV on Thursday, Friday, Saturday, and Sunday! This is rivalry weekend in college football and the hatred runs deep in a lot of these matchups. You can bet we'll see some big blowouts and maybe even a few surprising upsets.

Don't get caught up in all the Black Friday shopping madness! Instead, stay home and win big with our 6 college football best bets for Friday, November 25.

Central Michigan won 2 of their last 3 games but still holds a weak 4-7 record on the year. Their last game was a complete snooze fest they lost 12-10 at home to Western Michigan.

The Chippewas ran for 159 yards but failed to exceed 100 yards through the air. Defensively, they gave up over 250 yards on the ground. Ultimately, the 2 turnovers they allowed were a big part of the loss. The final one was the interception thrown that ended the game.

Eastern Michigan has had an opposite record to their opponents Friday as they sit at 7-4 on the year. Coming off back-to-back wins against both Akron and Kent State on the road, the Eagles are primed to finish the season on a 3-game win streak.

In the latest win, 31-24 over Kent State, the score was closer than how the game played out in the 4th. Kent State scored a touchdown with 41 seconds remaining to close within 1 score. Taylor Powell was exceptional, throwing for 315 yards and 3 touchdowns while completing 30 of 39 passes.

The Chippewas will use their strong rushing attack to control the ball in this one which could be another lower-scoring affair. The majority of the money is coming in on EMU, so we feel comfortable fading that and avoiding what we believe is a trap.

Baylor may be the best 6-5 team in the country. They have had a brutal schedule, and their toughest loss came last week. Hosting the #4 TCU Horned Frogs, they led 28-20 with just 3 minutes remaining.

Emari Demercado scored a touchdown to give TCU a chance to tie on a 2-point conversion but that failed. After getting a stop, TCU then drove down for a game-winning field goal as time expired to remain undefeated.

The Bears excelled on the ground, going for 232 yards on the ground. They were unable to contain Max Duggan as he threw for over 325 yards.

Texas, Texas, Texas, you have been the bane of our college football betting existence this season. At 7-4, the Longhorns are bowl eligible and are looking to end their regular season on back-to-back wins.

They are coming off a road win over Kansas where they dominated from start to finish in route to the 55-12 final. The ground game was back in action for the Longhorns. Bijan Robinson ran for 243 of the team’s 427 rushing yards.

Texas seems to take one step forward and then 2 steps back all season this year. After a dominating win against Kansas last week, we would not be surprised to see them drop one here at home as almost a double-digit favorite.

Baylor has very comparable stats to this Texas team and in a game that we see going down to the wire, we like taking the points in it.

The Sun Devils have had a rough go this season. At 3-8, many in the program have little hope that the season will end on a good note on the road against in-state rival Arizona.

They have lost 3 straight games to UCLA, Washington State, and last to Oregon State. In the loss to Oregon State, ASU scored to go up 7-0 but then saw the Beavers score 31 unanswered points. They allowed over 200 yards rushing to the Beavers and 28 total 1st downs.

Arizona has not been very impressive again this season. They sit at 4-7 on the year and have lost 5 of their last 6 games. After upsetting then #12 UCLA on the road 34-28, they dropped a home game to Washington State last week 31-20.

Wazzu forced 4 Wildcat turnovers which made a huge difference in the total yardage and on the scoreboard. Dorian Singer was the bright spot for the Wildcats. The Sophomore wideout grabbed 9 balls for 176 yards and a touchdown.

In a rivalry game where both teams seem relatively evenly matched, it is usually the home team that comes out as the favorite. With the oddsmakers making it such a short number, however, we believe the Sun Devils can do enough to keep this closer than the experts think. We expect Arizona’s troubles against the spread in November to continue in this one.

The Wolfpack have not been the same team since losing their All-Conference quarterback, Devin Leary. They have lost 2 straight games to Boston College at home and then last week on the road to Louisville.

The loss to Louisville accentuated the absence of Leary as they were only able to gain 290 yards and a minimal 10 points. The run game served almost no purpose as it went for 77 yards and Brock Domann did just enough to manage the game for the Cardinals to pick up the win.

North Carolina is 17th in the country and holds a 9-2 mark on the season. However, they had their 6-game win streak snapped last week at home against Georgia Tech. The offense was a shell of itself in the loss.

Drake May barely threw for over 200 yards and had no touchdown passes. Georgia Tech controlled the game and held Carolina to just 4 of 14 on 3rd down.

We don’t believe Maye will have back-to-back bad starts and the offense of the Tarheels will be overwhelming. The Wolfpack just does not have the talent to keep up with the firepower of the Tarheels. UNC will get this win by double-digits in what could be a higher-scoring affair.

It has been a tale of 2 seasons for the Florida Gators. They were 4-2 through 6 games but then dropped 3 of their next 5 for an overall record of 6-5 heading into this in-state clash with FSU.

Their last game was on the road at Vandy where they found themselves down 28-12 heading into the 4th quarter. Anthony Richardson tried to mount a comeback for the Gators but fell short. Florida outgained the Commodores 400 to 283 but converted on only 4 of their 15 attempts on 3rd down.

Florida State has put together a solid bowl resume over their last 4 games. After losing 3 straight games, all to ranked opponents in the conference, the Seminoles have won 4 straight games by an average of 33.5 points.

Jordan Travis has thrown 10 touchdowns and just 1 interception during that 4-game stretch. In their most recent win over Louisiana, 10 different ball carriers combined to get the Noles over 250 yards of offense on the ground.

Florida State looks like a team on a mission for a significant bowl bid while the Gators have been fizzling out down the stretch. FSU ranks 16th in the country on 3rd down and has a defense holding opponents to just 18 points per game.

The Gators are going to have a tough time putting up more than 2 scores here in Tallahassee where we expect FSU to win this one convincingly.

The 7-4 Cowboys of Wyoming had their 4-game winning streak snapped last week. They took on Boise State at home and led 17-13 midway through the 4th quarter. Taylen Green connected with Billy Bowens for a 38-yard touchdown strike that ultimately was the difference.

Wyoming’s offense was on the struggle bus all game. They converted just 1 of 11 3rd down attempts and turned the ball over 3 times. While they managed to establish a strong running game of 278 yards, their passing game was non-existent going for only 30 yards.

Fresno State, like Wyoming, is also 7-4 on the season. They are riding a 6-game winning streak that began after a 40-20 loss to Boise State back in October.

Their last game was a road win over Nevada where they outscored the Wolfpack 41-14. Jordan Mims led a strong rushing attack. He finished with 156 yards and a score on 19 carries.

The total is indicating that this should be a lower-scoring game which we believe favors the Cowboys. While Fresno can have a more potent offense at times, Wyoming has a run game that controls the time of possession as they are 55th in the country and averaging almost 200 yards per game.

This is just too many points for Fresno to be giving in this contest. We'll gladly take the undervalued dog!