49ers at Rams - Betting Odds and Our Pick for NFC Championship 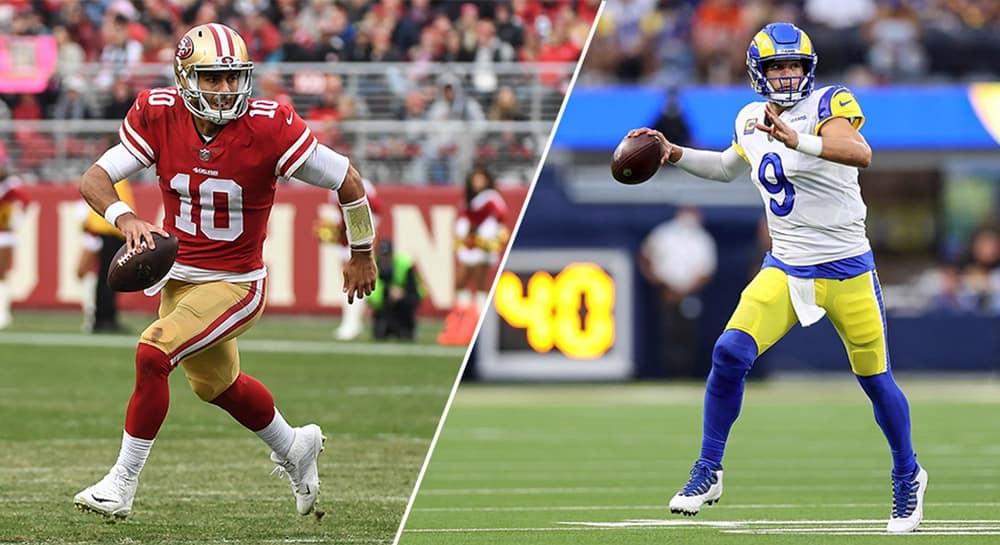 The San Francisco 49ers and Los Angeles Rams will square off for the third time this season, only this time the NFC Championship is on the line. The 49ers swept the regular-season series and have won 6 straight against the Rams.

With the news that Taylor Rapp and Andrew Whitworth will return for the Rams and Trent Williams is probably for the 49ers, both of these teams should be healthy for Sunday's matchup. Before we jump into our breakdown and pick, here is a look at the live odds and best available number for both sides and the total:

Outside of the letup, we saw in the second half of last week's game, the Rams are locked in on the defensive side of the ball right. They held the Cardinals to just 11 points in the Wildcard round and closed out the regular season by winning 5 of their final 6 games while giving up under 18 PPG.

Offensively, the Rams finished the season as the 7th highest-scoring offense and were 4th in the league in total passing yards per game. However, the areas they struggled most are areas that San Francisco will look to exploit. The Rams were just 25th in the NFL in rushing and 26th in the league in time of possession.

The 49ers won both of the meetings between these two teams this season by holding the Rams running backs to just 97 yards on 35 carries over those two meetings. The 49ers were also able to get pressure on Matthew Stafford, sacking him 7 times, and forcing him into 4 interceptions. San Francisco dominated the time of possession in both meetings including a 19-minute advantage in week 10.

The two previous meetings leads to a rare setup for this NFC Championship. There have only been 17 occasions in the last 71 years where a team has beaten the same team three times in one season and it hasn't happened since 2009.

Before we rush to back the Rams, it is important to note that in these matchups, the team that swept the regular-season series has gone on to win the third game 67% of the time.

Outside of the 2021 head-to-head record, here are some key betting trends for this NFC Championship game:

This game may end up being the toughest to handicap from these playoffs to date. The 49ers may have swept the regular-season series, but there is no denying the Rams have far more upside and did have a 17 point lead in the week 18 matchup.

We made the Rams our best bet in the divisional round and cited that neither team would have much success running the ball and think that will hold up here as well.

Both the defenses give up less than 1.1 yards before contact and neither offense has had much success on the ground in these playoffs. Elijah Mitchell has averaged just 3.4 YPC while the Rams running backs have been held to just 2.9 YPC. Deebo Samuel gives San Francisco a slight edge here as he has averaged over 5.5 YPC on his 20 carries this postseason.

Given the talent on both defensive lines, neither of these teams can afford to be one-dimensional in this game. We all witnessed what Donald, Miller, and Floyd were able to do to Brady last week and the 49ers come in with a ridiculous 15 sacks in their last three games.

Additionally, both defenses have held opponents to a QB rating under 80 this season despite facing Dak Prescott, Aaron Rodgers, Kyler Murray, and Tom Brady. This could translate to both offenses being willing to accept 3 yards a pop on the ground while trying to grind out long touchdown drives.

With this in mind, give us the under as our best bet. 4 of the last 6 meetings between these teams have stayed under the current 46.5 point total. Outside of just the head-to-head record, 5 of the Rams' last 6 home games have finished under the total, and the under has cashed in 6 of the 49ers' last 7 games overall.

Same game parlays are a great way to bet on a particular game script playing out. For instance, in our same game parlay pick for the AFC Title game, we bet that the Chiefs would get out to a big lead and that the Bengals would be forced to throw a ton. The pick included the Chiefs -7, Mahomes and Burrow passing yards, and Kelce receiving yards.

For this matchup, we like both run games to struggle, but think a guy like George Kittle, who has been relatively quiet when his routes run number is down, to have a big game because the 49ers are forced to throw more here. With that in mind, here is our favorite same game prop bet:

Total Under 46.5 - Given this is our best overall bet for the game, it has to make the same game parlay. If you like either side in this one, you could obviously swap this leg out with the spread or moneyline for either team.

Kittle Over 70.5 Receiving Yards - Kittle has shredded the Rams over his career and is due to have a big game in these playoffs. He averaged over 105 yards per game in his six meetings against the Rams prior to this season. He also averages the third-most yards per route run amongst all receivers left in these playoffs.

Cam Akers Under 60.5 Rushing Yards - Akers received 41 carries over the first two playoff games and still failed to even sniff this number. Playing the toughest run defense remaining in these playoffs, we don't think he even approaches 60.5 yards in this one.