49ers at Packers - Betting Guide and Our Best Bets 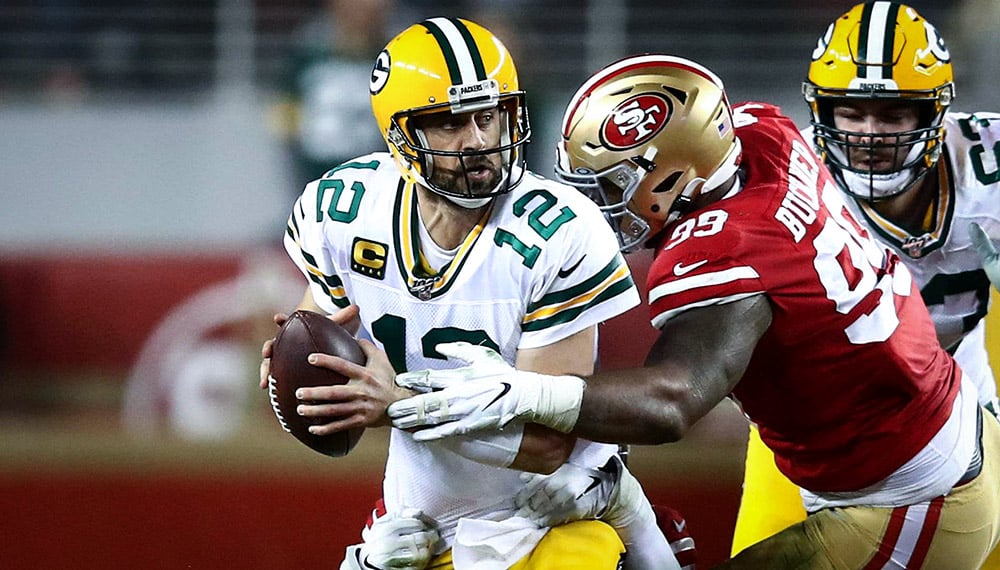 After a wacky Wild Card Weekend, the Divisional Round of the NFL Playoffs will kick off on Saturday. Let’s talk about the matchup between the San Francisco 49ers and Green Bay Packers, which kicks off at 8:15 PM Eastern Time on FOX.

The Niners are coming off a dominant performance in the Wild Card round against the Dallas Cowboys. Kyle Shanahan’s crew sent a message to the entire league by whipping Dallas at the line of scrimmage for most of the game. Will the 49ers be able to escape chilly Lambeau Field with another road upset?

The Packers were enjoying a bye week last weekend. Superstar QB Aaron Rodgers has stated this his injured toe will be close to 100% by the time this game rolls around. Getting healthy is a good thing, but will the time off hurt Green Bay’s rhythm on offense?

Live Odds for 49ers at Packers: NFC Divisional Round

In this write-up, we’ll take a closer look at each team’s offense and defense. We’ll also give out our Best Bet for this iconic rivalry game. But before we do any of that, let’s take a look at the live odds for this game.

It seems like tons of Niners fans love to rag on Jimmy Garoppolo. Sure, Jimmy G can be prone to making some poor decisions, but he’s done a terrific job of commanding the San Francisco offense this season. The 49ers lead the league in yards per play (6.1), red zone offense (TD on 67% of trips inside the 20), and yards per pass (8.2).

What’s scary about this Niners offense though, is that their offensive line is starting to push teams around. San Fran averages nearly 130 rushing yards per game and running back Elijah Mitchell has put up some nice numbers of late. The former Louisiana-Lafayette star ran for 963 yards and 5 TDs during the regular season.

The main playmaker on this Niners offense is Deebo Samuel, who has been a swiss army knife this season. The former South Carolina star has racked up 6 receiving touchdowns on the year as well as 8 rushing touchdowns. Samuel loves to punish would-be tacklers once he gets the ball in his hands.

Let’s switch sides and talk about the Green Bay defense. The Packers have done a fabulous job of stopping the pass this season. This unit ranks 4th in yards per pass allowed (6.2) and 9th in passing yards allowed per game (219.1).

The Packers have a couple of really good corners in Rasul Douglas (5 INT, 13 PD) and Chandon Sullivan (3 INT). Garoppolo will have to make sure he doesn’t force the ball when throwing deep against this Green Bay secondary.

Green Bay’s defense only ranks 15th in sack percentage. However, the Niners will have to keep an eye on Rashan Gary (9.5 sacks) and Preston Smith (9 sacks). The key question for this group will be if they can slow down San Fran’s running game.

There are not enough good things you can say about Packers QB Aaron Rodgers. The former Cal standout threw for 4,115 yards and 37 TDs this season. Rodgers may very well end up winning the MVP Award again this year.

As a whole, the Packers rank 5th in yards per pass (7.3) and 9th in yards per play (5.8). The main reason for those gaudy numbers is Davante Adams, who hauled in 123 receptions for 1,553 yards and 11 TDs this season. The former Fresno State star is a master at getting separation, no matter who is covering him.

The Pack hasn’t run the ball too effectively this year. However, they have a pair of talented running backs in A.J. Dillon (803 rushing yards, 7 total TDs) and Aaron Jones (799 rushing yards, 10 total TDs). It’ll be interesting to see if Green Bay can run the ball against a Niners defense that has played well against the run all year long.

Let’s shift gears and talk about the San Fran defense. Nick Bosa (15.5 sacks) is one of the best edge rushers in the game and is tough to defend with only one lineman. With Bosa in the lineup, the Niners ranked 3rd in sack percentage this season.

However, Bosa is still in concussion protocol at the time of this writing. If Bosa can’t go, the Niners may have a tough time putting any type of pressure on Rodgers in this game.

The San Francisco secondary has done a great job of limiting big plays. This unit ranks 9th in yards per pass (6.3) and 6th in passing yards allowed per game (207.8). Jimmie Ward leads the team with 2 interceptions this season.

This is too many points! Sure, Lambeau Field will be incredibly loud and the temp will be hovering down around zero, which favors the Pack. However, our power ratings say that Green Bay should only be a four-point favorite in this matchup.

The metrics strongly favor San Francisco in this game. From a statistical standpoint, the Niners have the better offense and defense in terms of yards per play and red zone efficiency. 49ers kicker Robbie Gould has also had a much better season than Packers kicker Mason Crosby.

In the end, we don’t think the Packers defense will be able to slow down the Niners’ dynamic running game. We’ll grab the +6 with the 49ers as our Best Bet and hope that Bosa will be able to suit up for this one! Best of luck with all your NFL Divisional Round action.