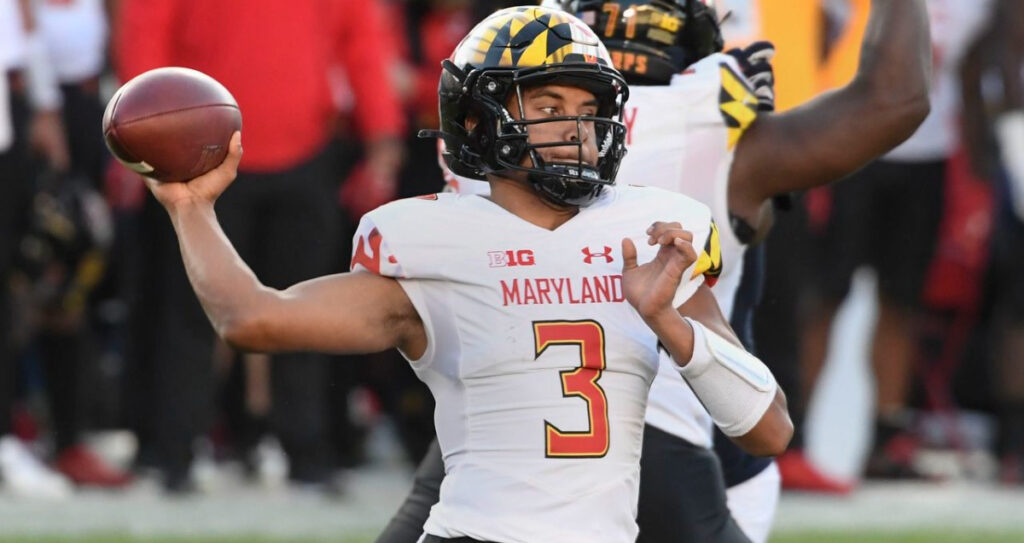 One of our 4 player prop bets for college football Week 11 is on Taulia Tagovailoa to go over his passing yardage number!

After an exciting weekend featuring three AP Top 10 teams losing, what can fans expect from this week’s games? Four games feature teams currently ranked in the Top 25 playing each other, leading to more exciting football and opportunities to cash in on some top player performances and prop betting this weekend.

If you haven’t already locked in your picks, here are four of the top college football player props for Week 11 on FanDuel. If you are new to FanDuel, check out the link below for a $1,000 “No Sweat First Bet”.

The Purdue Boilermakers hit the road to face the No. 21 Illinois Fighting Illini Saturday in this noon contest. The Boilermakers face their stiffest matchup yet, squaring off against the top-ranked passing defense in the country with both teams needing a win to keep their Big 10 championship game dreams alive.

Here’s the key to why Durham will have a big day against Illinois. When teams take away Purdue’s favored target in WR Charlie Jones, Boilermakers QB Aiden O’Connell looks to Durham for downfield passes to exploit coverage mismatches. Against Maryland, Durham stepped into the lead receiver role, nabbing seven catches for 109 yards and a score while the Terrapins double-teamed Jones.

Additionally, Durham has five catches this season over 20 yards in 2022 and is averaging 10 yards per catch. Expect Durham to have this prop covered by halftime as the Illini will focus heavily on Jones in their Big 10 matchup.

The Maryland Terrapins hit the road this weekend to face the No. 14 ranked Penn State Nittany Lions in this 3:30 p.m. contest. After his worst collegiate outing ever, Maryland QB Taulia Tagovailoa is primed to rebound big time against his nearby Big 10 rival.

Tagovailoa is among the best in the country, completing 70 percent of his passes for 2,078 yards on the season. He’s bested 260 yards on five occasions in eight games in 2022, and he’s topped that mark in 14 of his last 20 games for the Terrapins. Included in that stretch is a 371-yard performance in 2021 against the Nittany Lions.

While Penn State’s rushing defense is among the best in the country, the same isn’t true for its passing defense. The Nittany Lions allow passers to complete nearly 55% of their throws for over 235 yards per contest. Much like the 2021 game against Penn State, expect Tagovailoa to have a big day for Maryland.

In the premier SEC matchup this week, the No. 9 ranked Alabama Crimson Tide visit the No. 11 ranked Ole Miss Rebels Saturday at 3:30 pm. While Rebel RB Quinshon Judkins is the feature back for his offense, fellow backfield teammate Zach Evans is the rusher primed to return to the end zone against Alabama.

Before last week’s game against Texas A&M, Evans had scored in six straight contests for Ole Miss. Despite not finding paydirt against the Aggies, Evans earned 75 yards on eight carries, including a long run of 28 yards for the Rebels to set up a Judkins score.

The reason for this underdog selection comes from an Alabama squad being nowhere near their 2021 form as the Tide are allowing 104 yards rushing per game. Expect Evans to score at least one TD for Ole Miss whether the rusher records a big day or not.

In a possible Big 12 Championship game preview, the No. 4 ranked TCU Horned Frogs travel to Austin to face the No. 18 ranked Texas Longhorns Saturday night. TCU’s QB Max Duggan will attempt to keep the undefeated Horned Frogs’ playoff dreams alive with a victory over the fifth-ranked opponent for TCU in 2022.

Eclipsing the 257-yard mark has been no issue for Duggan this season. Before his below-average showing against Texas Tech last week, the senior QB had seven straight games above that total with only a season-opening spanking of Colorado as the outlier. On the year, Duggan has 2,407 yards on 66 percent passing with 24 TDs against only two interceptions.

The Longhorns are among the worst passing defenses in the country, yielding 258 yards per outing and 11 passing TDs total. Expect Duggan to lead TCU down the field at will against Texas, scoring an easy win for player prop bettors against the Longhorns.