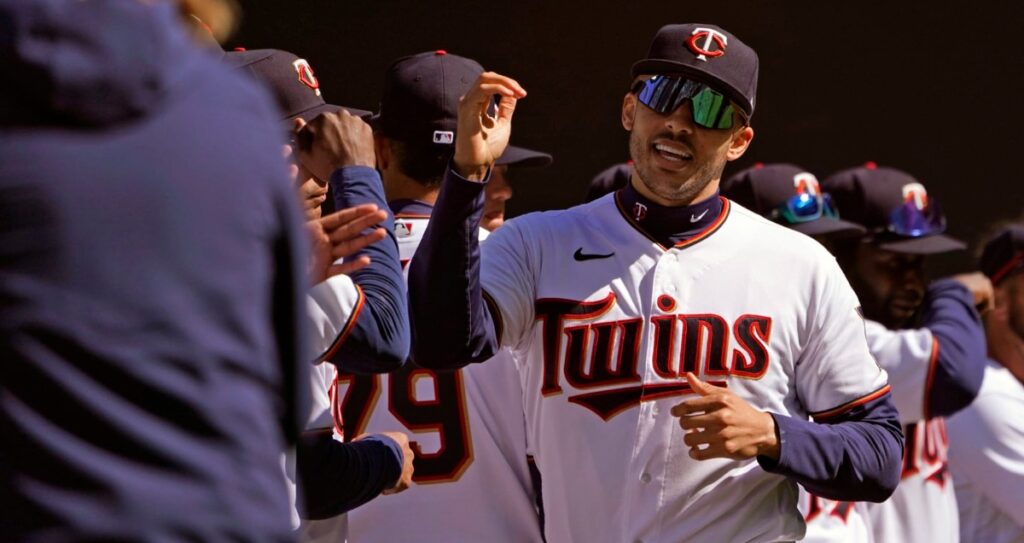 Carlos Correa and the Minnesota Twins make up two of our 4 MLB Best Bets for Tuesday, June 28.
By Mike Noblin on June 28, 2022

We kept the winning train a-rolling last night with another 3-0 sweep! The Yankees overcame a four-run deficit to the A's and the Twins and Orioles both won in blowout fashion. That brings our record to 30-11 since we began posting our MLB best bets on Twitter.

We know a lot of folks don't pay much attention to baseball. However, we like to remind ourselves that the money we win in MLB is just as green as the money that we'll win in the NFL. Here are our 4 MLB best bets for Tuesday, June 28. (Note: The first Twins game starts at 1:10 PM EST)

The Twins pounded the Guardians to the tune of 11-1 last night and we look for their bats to stay hot for Game 1 of this doubleheader. Gary Sanchez, Nick Gordon, and Carlos Correa all hit home runs in what was an impressive offensive display from Minnesota. It was Cleveland's worst loss since September of last year.

For some odd reason, the Twins have owned the Guardians in Cleveland. Minnesota has won 7 out of their last 9 games at Progressive Field and they've outscored Cleveland by 34 runs during that span. We see that trend continuing today.

The Twins will send lefty Devin Smeltzer to the bump for Game 1. The 26-year-old is 4-1 with a solid ERA of 3.05 this season. He dominated this Guardians lineup just five days ago by going 6 strong innings and only allowing 3 hits.

Cleveland counters with Zach Plesac, who is 2-5 with an ERA of 4.17. Plesac isn't awful but Byron Buxton, Carlos Correa, Nick Gordon, and Max Kepler have all homered off of him. Look for Minnesota to continue their hot hitting in Game 1.

We don't typically play the same team in double-headers but we'll make an exception for the Twins today. We've already talked about how they have dominated the Guardians at Progressive Field. Our numbers have Minnesota winning both of today's games comfortably so we are simply trusting our power ratings.

For Game 2, the Twins have recalled Josh Winder from Triple-A to start on the mound. The right-hander is 2-2 with a WHIP of 1.23 and an ERA of 3.68. None of Cleveland's hitters have ever faced Winder so that could be another plus for Minnesota.

Cleveland is also calling up another Triple-A pitcher to start Game 2 today. Left-handed Konnor Pilkington is 1-0 with an ERA of 3.67 this year and the Guardians are hoping that he can quiet the Twins' bats. The 24-year-old has 28 strikeouts in 27 innings pitched but we still think Minnesota's hot hitters can knock him around a bit in this one.

The Rangers have improved quite a bit this year and they have a respectable 18-17 road record. The Royals, on the other hand, have been in a tailspin since Opening Day. Kansas City is just 26-46 overall and a putrid 13-24 at home.

Texas will start Jon Gray on the hill tonight and he is 3-3 this year with a 4.18 ERA. Though Gray's numbers aren't mind-boggling, he's won his last 2 starts and looked much more confident in both of those outings. The former first-round pick has 68 strikeouts through 64.2 innings of work.

Kansas City counters by starting Jonathan Heasley, who is 1-3 with a 4.14 ERA through 8 starts this season. Heasley has an imposing 6-3 225-pound frame and is one of the Royals' top pitching prospects. Nevertheless, we expect the Rangers hitters to do some damage against Heasley and the Royals bullpen tonight.

We are going to keep riding this young Orioles team, especially if the oddsmakers keep disrespecting them with nice underdog prices. Baltimore has won 5 out of their last 6 games, including a 9-2 victory over Seattle last night. The O's are still in last place in the AL East but this team has some serious fight in them.

Baltimore has been pleased with how well Dean Kremer has pitched so far this season. The 26-year-old is 2-1 with a tiny ERA of 1.71 through 4 starts and he hasn't allowed a run since June 12th against the Royals. It'll be interesting to see if the Mariners hitters can get anything going against Kremer tonight.

Seattle sends last year's Cy Young winner Robbie Ray to the hill and he is in good current form. Ray has only allowed 2 runs over his last 20 innings of work so the O's hitters may have their hands full. Even with that being said, we can't pass up Baltimore at this juicy price!

Have a terrific Tuesday everyone! Let's stay hot and put today in the win column!