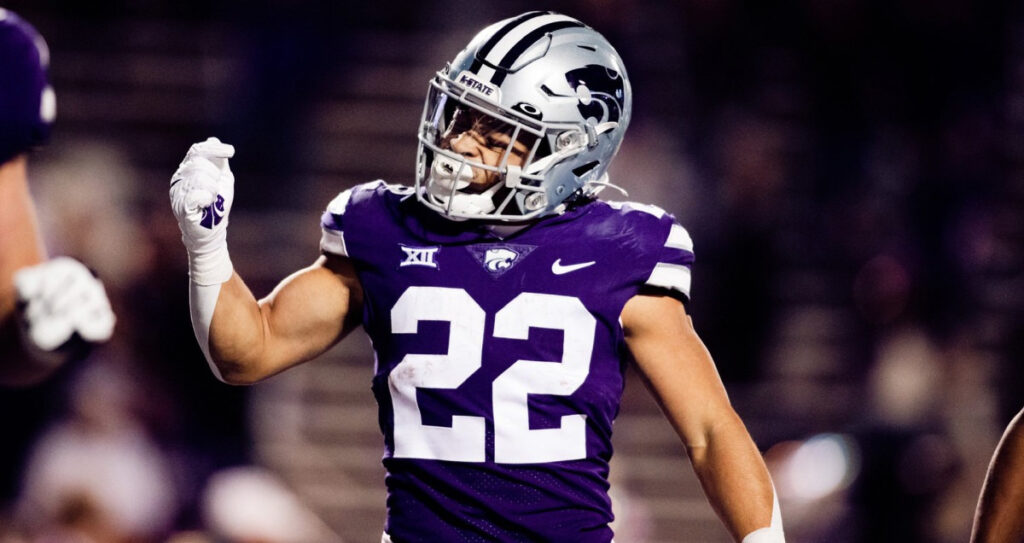 Deuce Vaughn to go Over 121.5 rushing yards is one of our 4 college football player prop bets for Week 5.

College football's Week 5 slate has a ton of interesting matchups on the board. With games like Alabama vs Arkansas, Ole Miss vs Kentucky, NC State vs. Clemson, and Michigan vs Iowa, this would be a good Saturday to spend in front of the TV for at least 12 hours!

One way to make the games even more exciting is to put a little money down on some player props! So, with that said, here are 4 college football player prop bets for Week 5. Let's make some cash!

I mentioned Iowa’s insane defense allowing only 5.8 points per game in an earlier paragraph. They’re for real and are led by linebacker Jack Campbell, who has already racked up 39 tackles in four games. This Hawkeye defense is also only giving up 131 passing yards per game.

As comically low as that is, it is a good reflection of how dominant they are on defense and despite McCarthy putting up video game numbers of his own, I don’t expect him to be able to dictate the terms of the game on his own against THAT defense in his first road game of the season.

Will Rogers Over 289.5 Passing Yards vs Texas A&M

This one feels almost too easy, which is crazy when you first think about a QB having to throw for almost 300 yards against a solid Texas A&M defensive unit. But it’s not as daunting of a number for Rogers and this offense that has thrown for an average of 351 yards per contest.

Rogers has already displayed a knack for carving up the Aggie defense as he threw for over 400 yards last season in College Station. My favorite part about this prop? The air raid offense.

No matter how much they are down or up by, Mike Leach’s QBs will still throw the ball no less than 45 times each game. I like to bet on props that have that large volume of support.

This is a fun prop because A. Vaughn is arguably the best running back in the country and certainly the best to play for Kansas State since Darren Sproles and B. fade a defense that surrendered over six yards per carry to another elite running back in Bijan Robinson.

In the Robinson scenario, he still ONLY ran for 106 yards on his 16 carries. I doubt Vaughn only sees 16 carries considering he is getting the ball an average of 21 times after four games and has yet to run less than 18 times in a game this season.

It also helps that he is coming off a 116-yard performance against a top-ten Oklahoma team. Deuce will run wild vs the Red Raiders.

Speaking of fun offenses and rushing attacks, Utah has been a team possessed since their upset loss to Florida to start the season. Since that loss, the team has rushed for 598 yards, 398 yards, and 465 yards in consecutive games.

Tavion Thomas, specifically, has gone for 59 and 60 yards in the last two games. I expect them to use their workhorse back more in this game considering the Oregon State defense is giving up 150 rushing yards per contest and is a good enough passing defense to force Utah to use their advantage: the run game. Take their top RB to feast on that advantage.