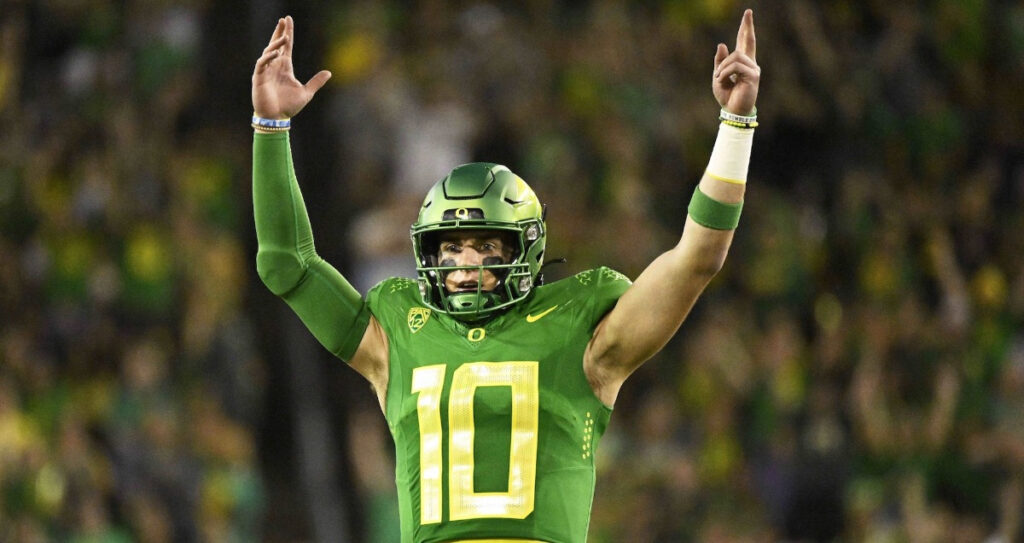 We're laying the points with Bo Nix and the Oregon Ducks on Wednesday against North Carolina.

We're getting into the thick of the college football bowl season, and the playoffs are right around the corner. There are 4 bowl games on the docket for Wednesday, and we've got a best bet in each one of them!

Ready to build your betting bankroll before the CFB Playoffs start? We got you! Here are 4 college football best bets for Wednesday, December 28. Let's bowl!

The Knights had a strong season up until the final 3 games, where they dropped 2 of them. Navy at home and then on the road against Tulane were disappoinments with their lone win in that stretch being at South Florida.

#18 Tulane never trailed to UCF in the regular season finale despite allowing the game to get within a score multiple times. The Knights allowed almost 400 yards through the air and over 250 yards on the ground by Tulane.

They were able to force 3 turnovers while not turning it over themselves at all. Kobe Hudson was the bright spot for the offense as he hauled in 4 passes for 98 yards and 2 touchdowns.

Duke finished their season winning 4 of their last 5, which lifted their record to 8-4. A loss on the road to Pitt 28-26 was the only blemish down the stretch.

In the regular season finale against Wake Forest, the Blue Devils accumulated over 500 yards of offense and had 2 receivers go over 100 yards receiving. Jalon Calhoun and Sahmir Hagans combined for 19 receptions, 313 yards, and 3 touchdowns in the 34-31 victory.

While Duke had tough games against ACC opponents, they did not face 1 ranked opponent all season. On the other hand, UCF faced 3 different ranked foes and went 2-1 against them.

However, the loss to Tulane to end the season showed many flaws in the Knights game and we believe Duke will be able to expose the shaky secondary of UCF.

Riley Leonard should be able to put on a show and get the Blue Devils a win of at least 7. We'll lay the points with the more motivated Duke team.

After starting out an impressive 5-0 on the season, the Jayhawks went just 1-6 the rest of the way, which included 2 separate 3-game losing streaks. The latter is the way they finished the season.

In the finale, on the road against Kansas State, the Jayhawks were unable to stop Deuce Vaughn. He led the Wildcats on the ground with 147 yards on 25 carries and through the air, where he caught 2 passes for 82 yards. Overall, the Jayhawks allowed 230 rushing yards and were only able to muster 180 yards passing to counter.

Arkansas finished with a .500 record as they lost 3 of their last 4 games of the season. While the win over then #14 Ole Miss was impressive, losses to Liberty and Missouri were not.

Missouri was who hosted the Razorbacks in the regular season finale and sent them packing with a 29-27 loss. Brad Cook did the damage with his arm and legs to defeat the visiting Razorbacks.

As bad as Arkansas was down the stretch, Kansas was that much worse. We can not rightfully back a team that finished 1-6 on the backend of their schedule.

The Hogs should be able to use their strong run game to control the pace of the game and prevent Kansas from many scoring opportunities.

We love Sam Pittman and expect that he'll have the Hogs ready to play. Let's lay the small number here!

The Ducks finished the season ranked #15 in the country with a record of 9-3. However, they did lose 2 of their last 3 to the #25 Washington and #21 Oregon State.

They did defeat #10 Utah between those losses but ultimately fell short of their goal of winning the conference. In the loss to Oregon State, they led 34-17 with just 15 minutes remaining.

Isaiah Newell ran for 2 scores, and Ben Gulbranson added another as all 3 scores were never answered by the Ducks. The Beavers were able to use an impressive rushing offense to overcome their 3 turnovers. Oregon will need to be better on defense against this high-power UNC offense.

After a 9-1 start, the Tar Heels lost 3 straight games to end their season. They looked like a different team losing to 5-7 Georgia Tech, 8-4 NCST, and then #9 Clemson.

In the Clemson loss, Drake Maye had the worst game of the season as he threw 2 interceptions and barely completed 60% of his passes. In fact, over the last 3 games, Maye threw just 1 touchdown to 4 interceptions and never got over 300 yards.

The defense allowed an average of 30 points per game to the opposition and will need to be better against Bo Nix and company.

The Ducks are going to light up the scoreboard in this matchup. The UNC defense is a shell of itself from earlier this year, and Drake Maye looks to be declining as well.

We don’t see UNC being able to keep pace with these Ducks as they run away with this bowl victory in blowout fashion.

We hate laying double digits in bowl games, but it's the only way we can look in this matchup. The Ducks will take this one by 20+.

The Red Raiders compiled a nice 3-game win streak to end their season and lift them to 7-5 overall. All 3 wins were respectable ones: Home against Kansas, on the road against Iowa State, and in the finale at home over Oklahoma.

In the finale, Texas Tech had to battle back from an early 17-0 deficit and ultimately forced overtime after a Trey Wolff field goal connected with just 8 seconds remaining.

After the Sooners missed a 34-yarder in the 1st overtime, the Red Raiders got in position for Wolff to nail a 35-yarder for the win. They were a solid 8 of 17 on 3rd down and racked up nearly 600 yards of total offense.

Lane Kiffin has already quelled the rumors of leaving and announced his intentions to stay as the Ole Miss head coach. This was a bit of a surprise as the Rebels lost their last 3-games of the season and 4 of their last 5 total.

After being one of the nation's best offenses on 3rd down (nearly 50% conversion rate), the Rebels were just 4 of 17 in their loss to Mississippi State in their final game of the regular season. They were also held to just 78 yards on the ground.

With Kiffin sticking around, we believe he will have this team prepped to make a statement in the Texas Bowl. He knows recruits will be watching to see if they can bounce back after their 3-game losing streak.

The rushing game will be leading the way, as they finished 7th in the country averaging over 260 yards per game on the ground.

The SEC has struggled in bowl games of late, but we'll still back them against the Big 12 every chance we get. Let's roll with the Lane Train! Hotty Toddy!