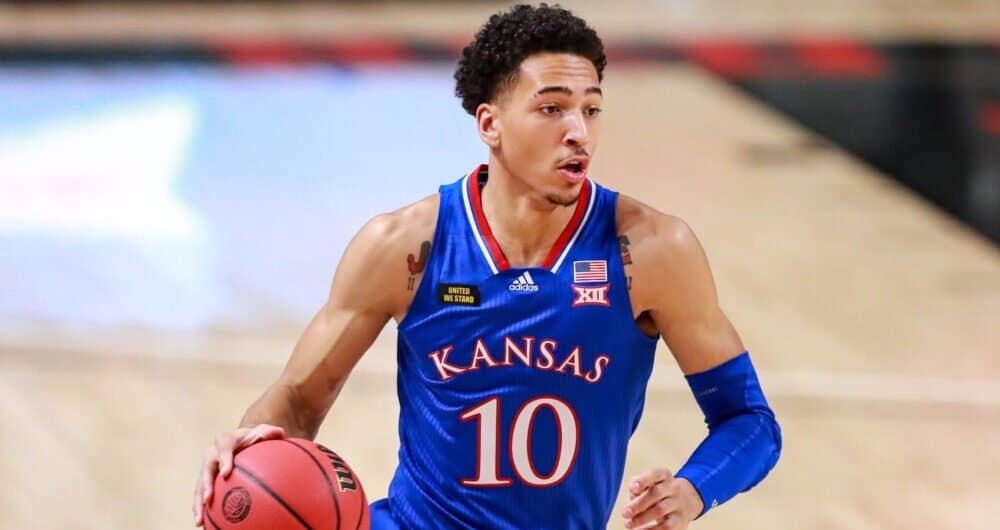 Well, ladies and gentlemen, it's been another March filled with lots of Madness! This year's NCAA Tournament has brought us a little bit of everything, from major blowouts to stunning upsets. Now that the dust has settled, we have four iconic programs in the Final Four.

Will Coach K and Duke be able to get by their hated rival North Carolina and into the title game? Can Villanova overcome an unfortunate injury to Justin Moore and upset Kansas? Here are 4 CBB player prop bets for the Final Four!

Martin is a fantastic leader and he has fit right in with this Kansas team since transferring in from Arizona State. However, having to share the ball with a super talented guy like Ochai Agbaji has really brought down Martin's numbers this season. The 6-foot senior went from averaging 19.1 points per game last year with the Sun Devils to only averaging 8.6 points per game this year with the Jayhawks.

Martin scored 23 points against Providence and 20 points against Creighton earlier in the tournament. However, he came back down to earth against Miami last weekend with only 9 points. Against a fundamentally sound defense like Villanova's, we think Martin may have trouble scoring.

Just how good is Nova's defense? The Wildcats only allow 62.2 points per contest, which ranks 18th in the nation. Nova also does a solid job of defending the three, as opponents are only shooting 30.1% from behind the arc against them.

When betting props, we always like to look at the game-by-game performances to spot any trends that stick out. Against this point total of 11.5, Martin is 18-10 to the Under this year. That's enough for us to bite on this Under.

Villanova seems to do all the little things well, but they aren't particularly impressive on the glass. The Wildcats only bring down 34.9 rebounds per game, which ranks 164th nationally. They also don't pull down many offensive boards either.

All of this makes us think that Wilson could have some success by crashing the boards in this game. The 6-8 sophomore from Denton, Texas, leads the Jayhawks in rebounding by averaging 7.4 per game.

Wilson's season-long rebounding numbers tell us that there's no value in betting this total. However, current form strongly favors Wilson grabbing more than 7.5 rebounds in this spot. Over his last three ball games, Wilson has racked up 36 rebounds.

We aren't crazy about the -135 juice, but we can easily see Wilson finishing with at least 10 rebounds. There's too much value on the Over to pass up.

We cashed an Over on Moore's point total last Saturday against Arkansas. We'll come back to him again this week, but with his number of made three-pointers. Moore worked hard the entire offseason on his shooting touch and it has paid off considerably.

The 6-5 junior is shooting a very respectable 41.1% from three-point land this season. This is a huge improvement over last season when he only shot 30.1% from downtown. We like Moore's chances of knocking down at least (2) three-point shots against the Tar Heels.

North Carolina isn't a great defensive team. They're one of the worst teams in the land at defending the three-ball, as they allow a three-point percentage of 34% (205th).

The only thing that concerns us is that Moore goes through phases where he doesn't shoot a lot of three-pointers. In fact, he didn't attempt a single shot from behind the arc against Arkansas.

Nevertheless, we feel there is some value in the +185 odds with this bet. For the season, Moore has made at least (2) three-pointers in 36.8% of his games. With odds of +185, the break-even percentage is only 35.1%. That's just enough to make us pull the trigger.

We have to stick to our roots and recommend another Under to wrap things up. Brady Manek is a stud down low for the Tar Heels and he's been on fire in the NCAA Tournament. However, we think the Blue Devils are able to keep him contained in this game.

The revenge angle should work in our favor in this spot. North Carolina embarrassed Duke in a 94-81 blowout win back on March 5th. Because of that, we expect the Blue Devils to come out with a lot of intensity on defense for this game.

Manek is a tough matchup as a 6-9 230 pound forward who can shoot the rock. However, Duke's center Mark Williams is 7-foot and 242 pounds and should be able to limit Manek's number of touches near the rim.

For the season, Manek has stayed Under 16.5 points in 22 of his 37 games. We'll roll with the Under and hope that Armando Bacot does most of North Carolina's scoring. Best of luck with all your Final Four action this weekend!