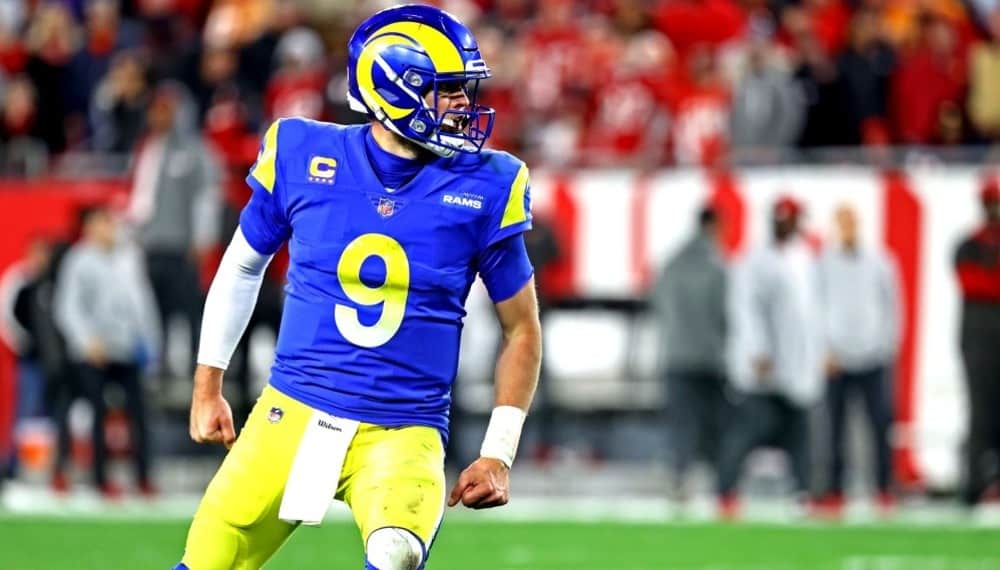 The NFC Championship Game kicks off at 6:30 PM Eastern Time on FOX with the San Francisco 49ers heading to SoFi Stadium to take on the Los Angeles Rams. These two teams are bitter NFC West Division rivals. They have already met twice this season with the Niners taking both games.

Will San Francisco make it three wins in a row over Los Angeles, or will Sean McVay have enough trick plays up his sleeve to get the Rams over the hump? It’s tough to pick a side in this game, especially since these two teams know each other so well.

Even if you don’t want to invest in the side or total in this game, you can still get plenty of action in the way of player props. Here are the 4 best player prop bets for the 49ers at Rams.

We cashed a nice ticket last week on Kittle’s receiving yards against the Packers and we feel there is enough value to pull the trigger again this week. The books seem to still be putting too much stock into Kittle’s cold streak from Week 16 to the Wild Card Round. Kittle had 29 receiving yards or less in each of those four games.

Though that streak was a bit alarming, Kittle broke out with a decent performance against Green Bay last week with 63 receiving yards. The former Iowa Hawkeye has had a fair amount of success against the Rams. In nine career games against Los Angeles, Kittle is averaging 78.4 receiving yards per game.

Another reason to like Kittle to eclipse 50.5 receiving yards is his yearly statistics. The three-time Pro Bowler averaged 65 receiving yards per game during the regular season. This points to some decent value in the Over!

For his career, Kittle averages 67 receiving yards per game. That stat also makes us feel that the 50.5 number is far too light. We expect Jimmy Garoppolo to target Kittle several times in this game so the Over is an easy play for us!

You have to feel good for Stafford, as he played lights out against Tom Brady and the Bucs last week. However, our numbers show that this line for his passing yardage is a little bit inflated. In six career games against San Francisco, Stafford has only averaged 275 passing yards per game.

Another reason to like this play is the stingy 49ers’ defense, which sacked Stafford 7 times during their 2 regular-season meetings. Nick Bosa has sacked Stafford 1.5 times already this year and we expect him to be in the backfield quite a bit in this game. Arden Key and Arik Armstead are also pretty good pass rushers in their own right, so Stafford will have to worry about them as well.

With not much time to throw, Stafford shouldn’t have much chance to exceed this yardage total of 280.5. Let’s go against the grain and take the Under!

We love Deebo Samuel’s toughness and hard-nosed running style. However, we don’t envision the former South Carolina Gamecock getting too many carries in this game. Samuel dinged his foot up late in last week’s game against Green Bay, so Kyle Shanahan may be more apt to keep him at wide receiver in this game.

Though Samuel has scored 8 rushing touchdowns this season, he’s only averaged 22.8 rushing yards per game. That means there’s a ton of value in the Under.

Sure, Samuel did go over this yardage amount in Week 18 against the Rams. However, he still ended up with only 45 rushing yards in that game. Samuel has only exceeded 42.5 rushing yards in four games this season.

Another reason to like this Under is the Rams stout rushing defense. Los Angeles only allows 3.9 yards per rush, which ranks 5th in the league. This unit also only allows 98.2 rushing yards per game, which also ranks 5th.

We predict that the Niners will give running back Elijah Mitchell the bulk of the carries in this game. Take the Under!

This one is quite a bit pricey, but we see enough value to drink the extra juice. Higbee doesn’t get much attention in the Rams’ offense, as Odell Beckham and Cooper Kupp get the majority of the headlines. However, Higbee is a reliable option for Stafford over the middle of the field.

Higbee had a pretty good regular season, as he hauled in 61 receptions (the 2nd most in his career). The former Western Kentucky Hilltopper averaged 4.1 receptions per game this year. This points to some value in the Over.

We think the Niners’ defense will shift most of its focus to defending Kupp and Beckham in this game. While that may make plenty of sense for San Fran, it should open up plenty of opportunities for Higbee to make some catches.

Keep in mind that Higbee has caught 4 or more passes in 5 out of his last 6 games. When the Niners choose to bring the blitz, Stafford will be looking to Higbee as his safety valve.

We can easily see Higbee catching 6 passes in this game so take the Over! Good luck on all of your NFC Championship Game player prop bets!

Looking for an NFC Title game player prop with slightly longer odds? Find our favorite longshot bet from all of the available wagers below.

If we like Kittle to go over his receiving yardage number, it would stand to reason that he is in play to lead the game in total receiving yards. Obviously Cooper Kupp is a major roadblock to this ticket cashing, but that is why we get +900 odds on this wager.

For their careers, Kupp averages just 51 YPG against the 49ers to Kittle's 78 YPC against the Rams. Digging even deeper, Kittle averaged 106 YPG with 5 touchdowns in his six starts against the Rams prior to this season.

With the Rams run defense playing lights out in the first two games of this postseason, we think there is a chance Kittle's total routes run jumps up from the previous two meetings between these teams.