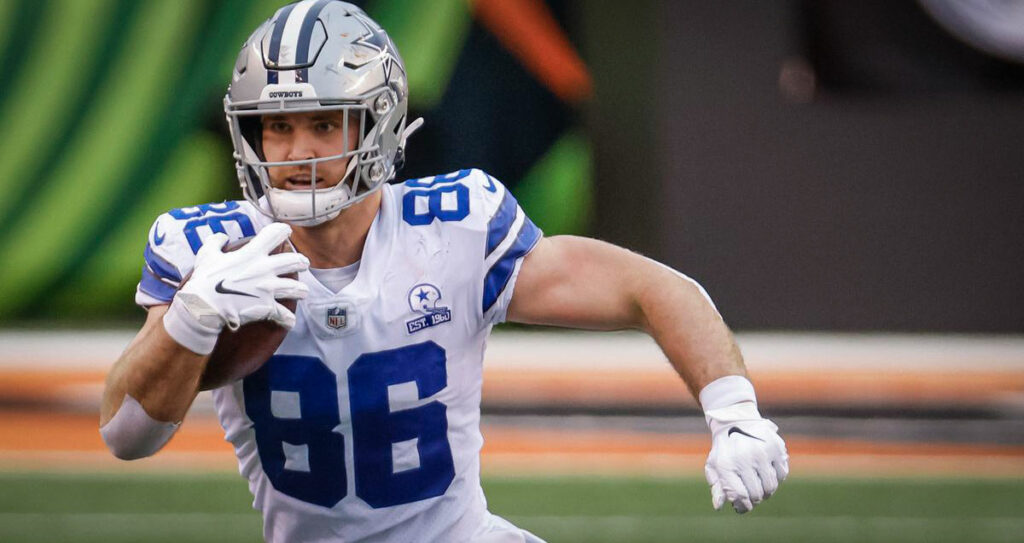 We like Dalton Schultz to go over 5.5 touchdowns this season.
By Bill Christy on August 10, 2022
Travis Kelce was the only tight end to reach double-digit touchdowns in 2021. However, only 9 came through the air as he did take 1 rushing touchdown in. He finished tied with Hunter Henry, Dawson Knox and Mark Andrews for the league lead of 9. The Bucs duo of Rob Gronkowski and Cameron Brate combined for 10 total. Gronk is now “officially” retired and the Bucs added veteran Kyle Rudolph to fill the void.

There will most likely not be a rookie tight end that puts up numbers similar to Kyle Pitts from last season. Trey McBride of Arizona is the only one with any type of potential, but that would require Zach Ertz to miss time with an injury.

We will be taking into account some important factors when handicapping these totals. Strength of schedule will be one of these factors. Players may face easier teams on their schedule in terms of defensive matchups. Injury history will be another factor. This is likely to play into some under plays when looking at the possibility to get a number that we feel may be attainable for a player, pending they play an entire season.

Changes in the coaching staff and contract status will be a couple of the other factors. We may see a player that has put up decent numbers in years past, but now has a head coach or coordinator that has a history of utilizing said player's position more. The opposite can remain true as well. With contract status, we will be leaning on going under on players that have signed fat contracts and leaning over on players that are in the last year of their current contracts.

While Pitts had an incredible year last season in terms of receptions and yards, he was only able to find pay dirt one time. In 2022, we believe this will change in drastic fashion. While Pitts saw a ton of double coverage and small areas to work with inside the red zone last year with Matt Ryan at QB, this changes this season. Marcus Mariota is nothing special in terms of overall QB talent, he is special in extending plays and forcing defenses, specifically linebackers, to pay close attention to his mobility inside the red zone. Mariota’s legs should provide more opportunities for Pitts who we believe will cash in over 5 times this season.

George Kittle has been one of the top tight ends in the league year in and year out since he entered the NFL. In terms of touchdowns, Kittle has surpassed 5 touchdowns just once in his 5 years in the league. That one time did happen to be last year where he snuck over the number by a single touchdown. While he will remain in the upper echelon of tight ends again this season, his touchdown production is likely to remain just below 6 touchdowns.

Dalton Schultz took a tremendous leap forward in 2021. He increased his reception total by 15, his yardage by almost 200, and he doubled his touchdown production from 4 to 8. The idea of him reaching 8 or more touchdowns in 2022 is a lofty projection and one we are not foreseeing. That said, the Cowboys did lose Amari Cooper who was one of Dak’s favorite red zone targets which we believe will benefit Schultz this season. Over 5 touchdowns will be well within reach for him in 2022.