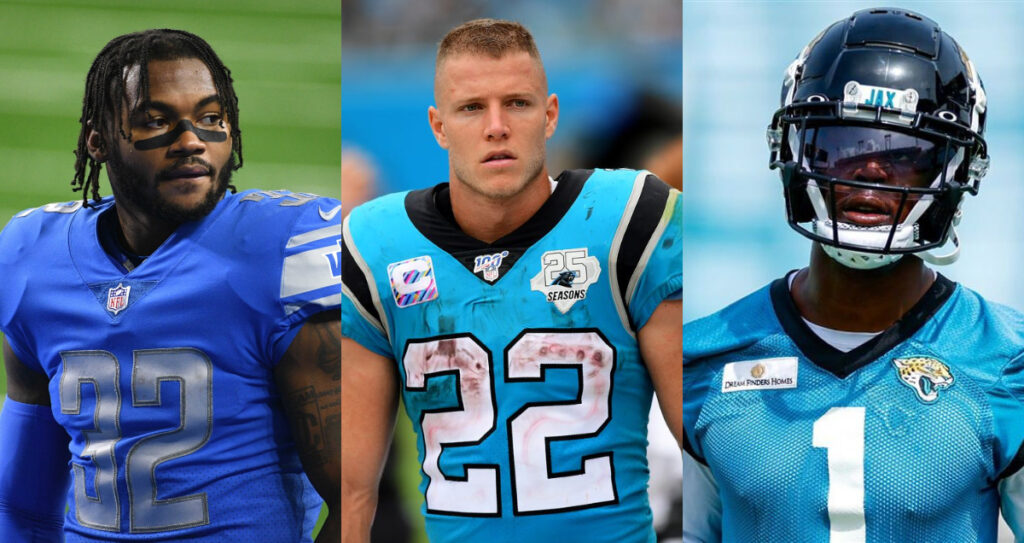 D'Andre Swift, Christian McCaffrey, and Travis Etienne make up our 3 RB rushing and receiving yardage props for 2022.
By Bill Christy on July 29, 2022
When it comes to betting season-long props, RB rushing and receiving yardage can be a tricky beast. Cordarrelle Patterson and Deebo Samuel come to mind when many think of this statistic, but we are focusing on the running back options here. Austin Ekeler, Najee Harris, and Leonard Fournette were the top 3 backs last season in receiving yards.

However, it is not always backs that like to catch the ball out of the backfield that can be profitable here. Jonathan Taylor had just 360 yards through the air but racked up 2100 on the ground. He surpassed both rushing yards and rush+rec yard totals for last season.

The important piece for these plays will come down to opportunities. Taylor had plenty of opportunities last season as the most featured back once Derrick Henry went down. His 332 carries were almost 30 better than Harris, who finished 2nd.

Some of the guys below will have opportunities and others will have limited touches. We plan to be on the right side of both, as we take into account things like strength of schedule and coaching changes as well. Here are 3 RB rushing and receiving yardage props for 2022.

We will start with the elephant in the room with McCaffery and that is his durability. When healthy, the guy is a top 3 back in the league but he is coming off a season where he only played 7 games after previously playing just 3. Even if healthy, I feel as though the Panthers are going to be cautious with him and avoid giving him the big workhorse numbers that he put up in his 1st three seasons in the league.

Chuba Hubbard did great in filling in for the injured McCaffery last season. As a rookie, Hubbard posted over 600 yards on the ground and added 25 receptions for 175 yards. He will be used in a large role this year. Limited reps, sharing a workload, and the threat of injury are all factoring into use playing the under on McCaffery.

From one back that was injured most of last season to one that never made his debut. Etienne went down in preseason and never saw the field in 2021. James Robinson was serviceable until he too went down with an injury.

Etienne is the leader on the depth chart and will be playing with something to prove this season. He will have Lawrence running the show, who he is beyond comfortable with from their time together at Clemson.

This offseason there has been a ton of mixing Etienne into the WR game. All things considered, he should get plenty of opportunities to rack up yardage on the ground and through the air. If he stays healthy, Etienne should have no problem reaching this mark.

Mr. Swift, despite only 13 games of action last season, put up over 1000 rush+rec yards. This season, he will be playing in an offense that added explosive Jameson Williams from Alabama through the draft. It seems that coach Dan Campbell has this Lions team finally heading in the right direction.

Since the Lions should be competitive in every game, it will provide more and more opportunities for D’Andre Swift to use his quick acceleration to break big plays. His increase in carries by 37 and receptions by 16, should only increase again this season. He may not need a full season to reach this number but if he is available for every game, 1500+ will be in play.