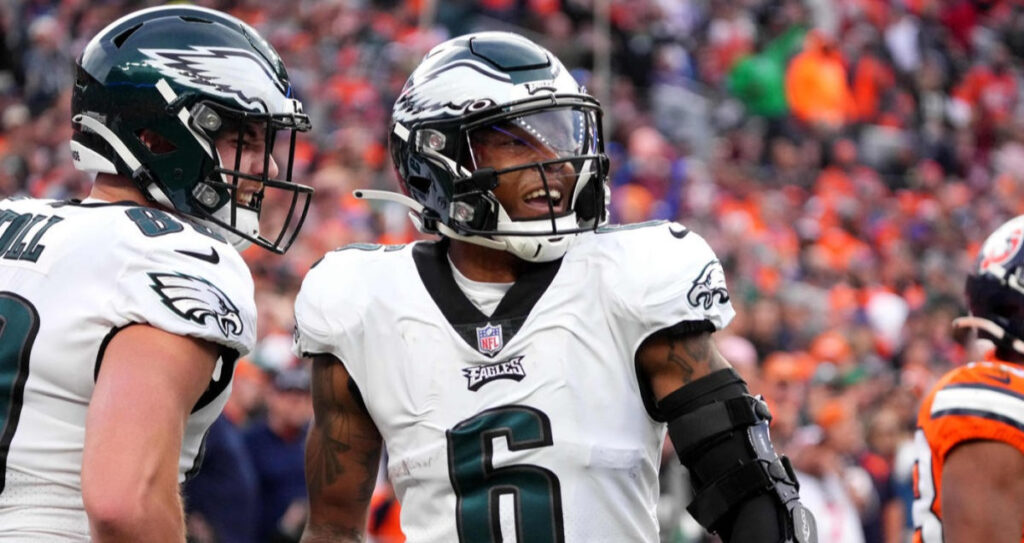 One of our 3 NFL player props plays in on DeVonta Smith to go over 5.5 receptions.

Saturday’s schedule for the Divisional round of the NFL playoffs features two teams coming off a bye week, with the Eagles and Chiefs facing opponents they’ve seen at least once before this season. The well-rested Philadelphia and Kansas City units will play host to teams that both won nine games and did not win any of the previous matchups against their higher-ranked opponent during the regular season.

The Giants’ second trip to Philadelphia in three weeks will be as 7.5-point underdogs, while the Jaguars are 8.5-point dogs in their rematch with the Chiefs in Kansas City. Both games should be highly entertaining and hopefully competitive.

It was a monster day for us on the prop card last Saturday as we cashed two of three main plays and hit big on a 13/1 anytime touchdown scorer parlay thanks to Ken Walker III, Elijah Mitchell, and Austin Ekeler all finding painted grass.

We could not be more excited to attack these final opportunities to build our bankroll before the NFL season wraps up! We've crafted another edition of player prop best bets for the Divisional round that are presented just ahead.

Featured Offers for NFL Divisional Round

Pacheco’s 16-carry, 82-yard performance against Jacksonville in mid-November was the beginning of his emergence as the lead ballcarrier in the Chiefs' backfield. Over the final nine weeks of the season, he averaged 14 carries and 70 yards per game during a stretch in which the Chiefs lost just once.

The re-emergence of Ronald Jones in the final game of the regular season is a slight cause for concern in terms of Pacheco’s touches, but the rookie averaged 8.0 yards per carry to Jones’ 4.5 in their victory over Las Vegas.

Jacksonville’s defense allowed 100+ rushing yards in 10 of their last 15 games during the regular season and we like Pacheco to lead the charge for the Chiefs against the Jags on Saturday.

Smith led the team in targets since Philadelphia’s November 14 loss to Washington with 83 in nine games. He has firmly established himself as the perfect compliment to AJ Brown in this offense.

The second-year Alabama product averaged fewer yards per reception than Dallas Goedert this season while leading the team in receptions and saw 16 combined targets across two earlier matchups with the Giants.

His target share and proven ability to get open make his receptions total slightly more appealing than his yardage, and we’ll play this prop with that in mind.

Hurts averaged 223 passing yards per game in two regular-season matchups against the Giants. His 62.1% completion percentage on 66 throws across those two games would have ranked just below Taylor Heinicke for 28th in the NFL over the course of an entire season.

While that could be misleading, the more damning indication of Hurts’ play this week was his performance against the Giants in a must-win game for the Eagles in Week 18. He threw for 229 yards while completing 57% of his throws in a return from a shoulder sprain he’s dealt with since December 18.

The pain Hurts' experienced was well-documented after that win, and our prediction is that one week off isn’t enough to give Hurts the relief he’ll need to throw for 245+ yards in a hard-fought game between familiar opponents. Take the under on his passing yards Saturday night.

We feel obligated to try another anytime TD parlay since last week paid off in a big way! Look at this parlay as just a fun bet to enjoy some playoff football even more. Let's play this for 10 to 20% of your normal wager size. Good luck!

Jump on this one now while it's still available at BetMGM. Every other sportsbook out there prices this prop at 23.5. That gives us around a 4% edge, which is incredible.