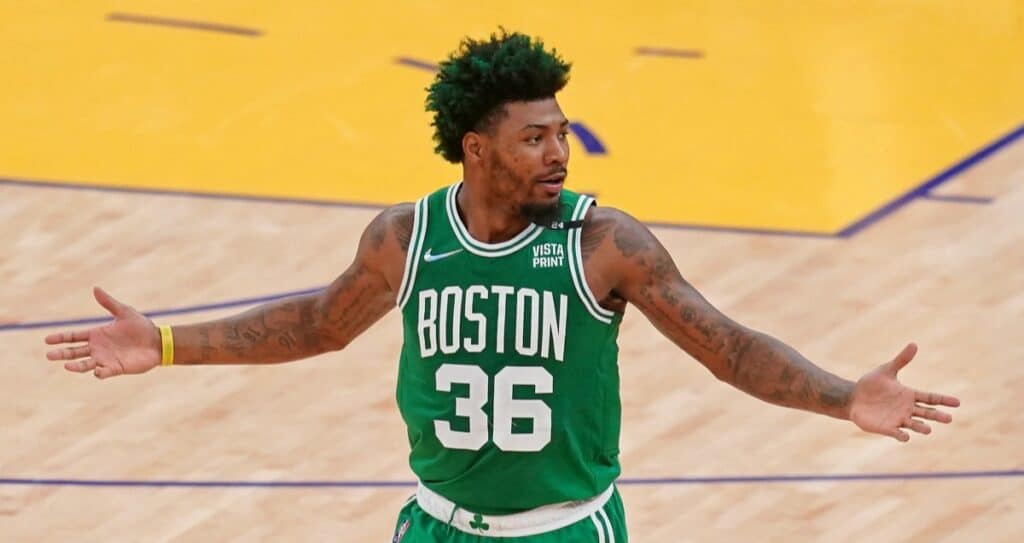 We like Marcus Smart to go Over his assists total in Game 6 of the NBA Finals.
By Mike Noblin on June 16, 2022

So many questions need to be answered in Game 6 of the NBA Finals. How will Boston respond with their backs against the wall at home? Can Golden State's fabulous role players step up once again and clinch yet another NBA title?

If you need some help finding value on the Game 6 prop board, you've come to the right place. We've isolated three player props that we think have plenty of betting value. For more winning info on Game 6, check out our Best Bets column.

Best Prop Offers for Game 6 of the NBA Finals

This prop bet may require you to hold your nose and take a shot of your favorite type of liquid courage! Curry has been by far the most exciting player to watch in the NBA Finals but he cooled off quite a bit in Game 5. Boston's tenacious defense held Curry to just 16 points on 31.8% from the field.

Back home in Boston for a win-or-go-home game, we are expecting a lights outs defensive effort from the Celtics. Keep in mind that Boston led the league in a whole slew of defensive categories this season (points per game allowed, effective field goal percentage allowed, and three-point percentage allowed). Marcus Smart is the best overall defender in the league and we think he'll be able to contain Curry again in Game 6.

Could Curry prove us wrong and go off for 43 points as he did in Game 4? Absolutely, but we are taking the road less traveled and playing the Under. Most of Curry's jump shots were hitting the front of the rim during Game 5, which suggests that fatigue may be setting in.

Even after a devastating Game 5 loss, Brown was adamant that his faith in his team has never been higher. We try not to read too much into postgame quotes, but that one caught our attention. Though Brown is known more for his scoring prowess, we've been impressed with his rebounding ability against Golden State.

In 7 games against the Warriors this year, Brown has eclipsed this rebounding total in 5 of them. As we said before, that's pretty impressive, especially for a shooting guard. He's averaging 6.9 rebounds per game during the playoffs.

Since this is a do-or-die game, look for Brown to be on the floor for the majority of the night. This will give the former Cal Golden Bear a great chance to bring down 7 or more rebounds in Game 6. Play the Over!

Smart hasn't been much of a facilitator in these NBA Finals, as he has yet to go over this assist total through the first five games. However, we expect that to change in Game 6. Smart is simply too good of a passer to be held in check any longer.

In two regular-season games against Golden State, Smart averaged 8 assists per game. He also averaged 6.1 assists per game at home this season. Both of those numbers point us toward the Over tonight, especially at the generous plus-money price!

We also love the fact that through 71 regular-season games Smart racked up 6 or more assists in 43 of them (60.5%). Look for Smart to drive the lane more often and drop some dimes in Game 6. Best of luck with all your NBA action on Thursday!