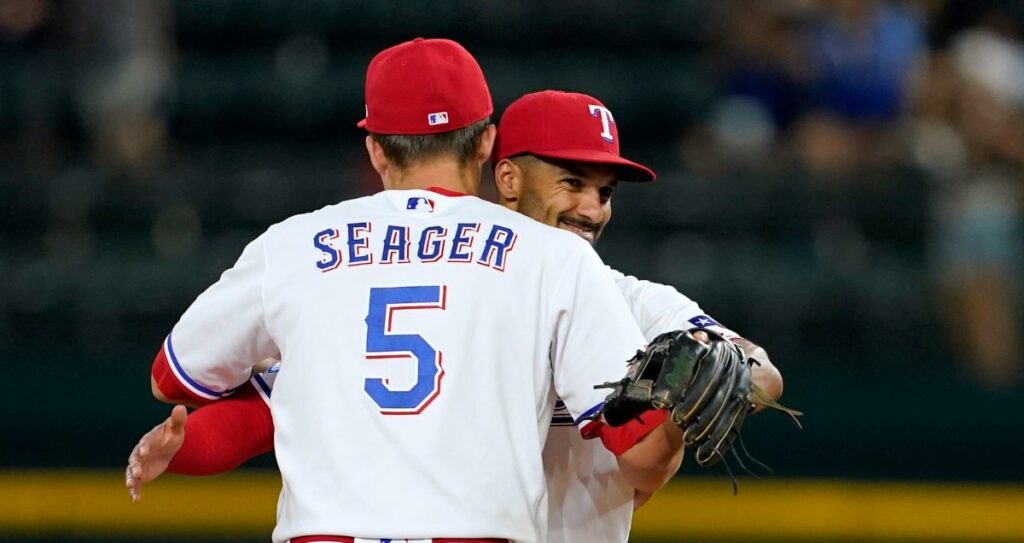 We are counting on big performances from Corey Seager and Marcus Semien on Wednesday.
By Mike Noblin on June 29, 2022

The Twins bullpen let us down in Game 1 of their doubleheader on Tuesday against the Guardians. Luckily, Minnesota bounced back to salvage Game 2 for us. The Rangers disposed of the Royals rather easily but the Orioles were shut out against the Mariners.

After a 2-2 performance yesterday, we'll try to improve on our 32-13 record. Here are our 3 MLB best bets for Wednesday, June 29. All of these bets are day games, so make sure to get your action in quickly this morning.

We've made a nice profit fading this A's team and we have no problem laying the run line with a powerful offense like the Yankees. The Bronx Bombers were limited to only 2 runs on Tuesday but still came away with a 2-1 victory yesterday. We are expecting a much better offensive showing from New York in this 1:05 Eastern Time start.

The Yanks will send Jameson Taillon to the hill and he's been fabulous all season with an 8-1 record and an ERA of only 3.19. New York has won 12 out of Taillon's 14 starts and they always seem to give him plenty of run support. One item of concern is that Taillon's ERA is 4.96 over his last 3 starts.

The A's will hand the ball to Cole Irvin, who has an impressive 3.29 ERA despite his 2-5 record. Irvin has had some success against this Yanks lineup but Josh Donaldson and Anthony Rizzo have each homered against him in their careers. Irvin may mow through the Yanks for a few innings but in the end, the boys in pinstripes will be too much.

Houston's bats came to life in a big way on Tuesday night, as the Astros blew out the Mets by 8 runs. We are expecting more of the same on Wednesday afternoon, especially with a future Hall of Famer like Justin Verlander on the hill for Houston.

Verlander (9-3, 2.22 ERA) may be 39 years old but he still has almost unhittable stuff when he's on his game. The veteran right-hander is coming off of a stellar outing against the Yankees where he allowed only 1 run and 4 hits in 7 innings of work. Verlander will have to pay special attention to Francisco Lindor, who is hitting .313 with a homer against him in his career.

The Mets will counter with Taijuan Walker, who is a solid 6-2 with a 3.03 ERA. The right-hander is in excellent current form and is 3-0 over his last 3 starts with a WHIP of only 1.07. Jose Altuve is batting .379 with a homer in his career against Walker and he'll once again be the sparkplug for the Astros in this game.

This is our favorite bet of the day! The Royals have lost 4 straight games and haven't shown any signs of life over the last week or so. Meanwhile, the Rangers have been hitting the ball decently and are only one win away from being at .500.

Dane Dunning has had a tough season so far, but we expect the Texas bats to give him lots of run support today. The former first-round pick is only 1-5 this season with an ERA of 4.17. However, Dunning has done much better over his last three starts (0-1, 3.24 ERA) and we think he'll carve up this lackluster Royals lineup pretty easily today.

Veteran Zack Greinke just doesn't have the same dominant stuff that he used to. The former Cy Young winner has been roughed up over his last 3 starts (1-2, 8.56 ERA, 1.46 WHIP) but he has pitched much better this year in day games.

Rangers slugger Corey Seager has 3 homers in only 19 career at-bats against Greinke. Kole Calhoun has also hit Greinke well in his career with a batting average of .545 and 2 home runs. Texas has too much offense for Kansas City once again today!

Let's make it a wonderful Wednesday, everybody! Best of luck with your action!