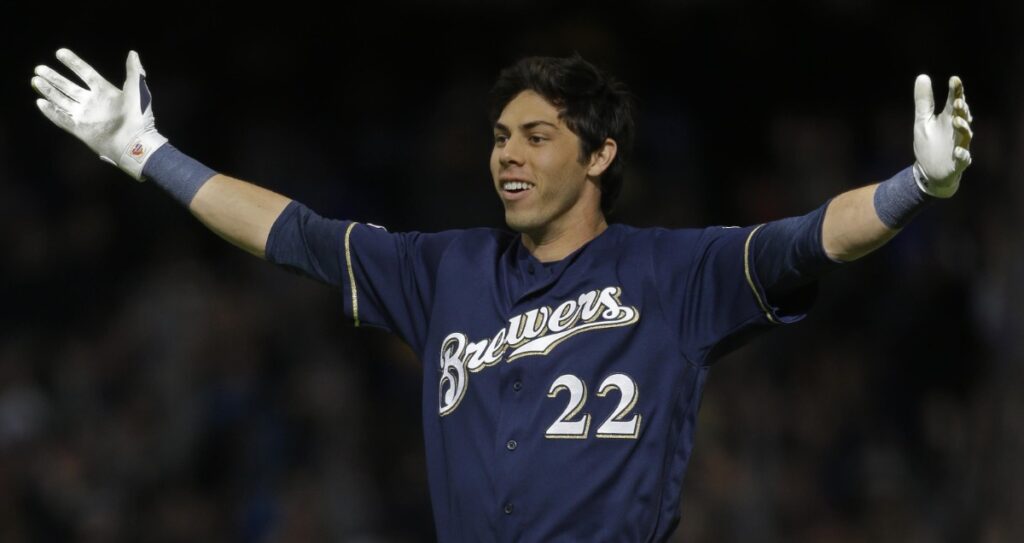 Christian Yelich is a big reason why we like the Brewers over the Cubs as one of our 3 MLB best bets for Tuesday.
By Mike Noblin on July 5, 2022

Welcome back! We hope everyone had an enjoyable Independence Day weekend! Our MLB best bets went 2-1 last Friday, which brought our record to 39-15 overall. With exactly two weeks to go before the All-Star break, some teams that are already out of the playoff picture will start to mail it in.

Though we are more than happy with our start to the season, our process remains the same. We aim to find only the best plays on the board each day and we never change our bet size, even during a winning streak! Here are our 3 MLB best bets for Tuesday, July 5.

We've made a boatload of cash on the Yankees so far and don't plan on going away from them anytime soon. While this may be oversimplifying it, the Yanks are the best team in baseball and the P'Rats are the worst team according to our power ratings. Pittsburgh simply doesn't have enough offensive firepower (only 3.78 runs per 9 innings) to keep up against a team full of soon-to-be All-Stars.

The Yanks will send Jameson Taillon to the mound, who got his start in the Pirates organization before some bad injury luck and a bout with testicular cancer derailed the start of his career. The 30-year right-hander is an impressive 9-1 on the season with an ERA of only 3.32. We love the fact that the Yankees have won 13 of Taillon's 15 starts this season.

The Pirates counter with Jose Quintana, who has been the most consistent starter in the rotation for them. The crafty veteran lefty is 1-4 on the year but does have a nice ERA of only 3.43. New York sluggers Joey Gallo and Josh Donaldson have both homered off of Quintana in their careers. Quintana will probably keep the Pirates in the game for a few innings before the Yankees' powerful lineup destroys Pittsburgh's lackluster bullpen.

The Cubs have shown some fight of late but they've won just 8 of their last 29 meetings against the Brewers. Milwaukee has been playing pretty solid of late, as they've won seven of their last ten. Cubs catcher Willson Contreras left yesterday's game with a sore hamstring and he may not play in tonight's affair.

After a rough start to the season, Chicago starter Kyle Hendricks has pitched better over his last three starts. Manager David Ross has been raving about how sharp Hendricks' sinker has been of late. Even with that being the case, we still like the Brewers' chances against Hendricks, especially since Jace Peterson and Christian Yelich have two homers apiece against him in their careers.

Milwaukee rookie Jason Alexander will make his sixth career start and though he is 2-0, we are a bit concerned since opponents are hitting .328 against him. However, we love the fact that Alexander only allowed two earned runs against the Cubs back on June 1. Even if the young righty has some trouble, the Brew Crew's bullpen is one of the best in the NL.

This Houston team is on fire, as they've won nine of their last ten ball games. The Royals, however, have dropped six of their last ten. The Astros' offense ranks 5th in OPS while the Royals are only 24th.

Former Cy Young winner Zack Greinke will get to pitch against his former teammates on Tuesday night. The veteran righty is 2-4 this season with a 4.38 ERA through 12 starts. Jose Altuve has been a thorn in the side of Greinke, as the second baseman is hitting .385 with a homer in 26 career at-bats against him. We love the fact that Greinke has also struggled at night this season (1-1, 6.04 ERA).

Luis Garcia has been on a roll for the Astros, as he is 3-0 over his last three starts with a WHIP of only 1.04. The big 25-year-old righty is 1-1 with a 2.41 ERA against the Royals in his career. We think Garcia gets the better of this struggling Kansas City lineup tonight. Best of luck with your Tuesday action everyone!