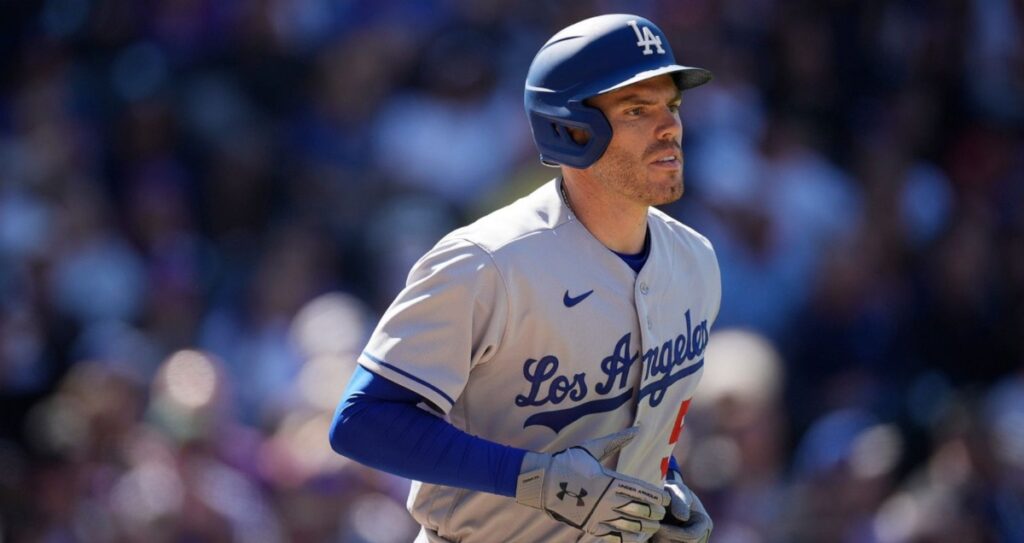 We look for Freddie Freeman to lead the Dodgers to victory as one of our 3 MLB best bets for Thursday.
By Mike Noblin on June 30, 2022

Another 2-1 day yesterday brings our record to 34-14 since we started posting our MLB picks on Twitter back on June 2nd. It's been a solid month, to say the least, and we almost hate seeing the calendar turn to July. As we get deep into the dog days of summer, there will be several teams to ride and several to fade.

Here are 3 MLB best bets for Thursday, June 30. Let's finish the month on a high note!

This Cubs team doesn't have many pieces of the 2016 championship roster left. One of the few guys still around from that historic squad is Willson Contreras and he's been on a major tear of late. The star catcher was instrumental in the Cubs' 8-3 victory yesterday, as he clubbed a two-run homer as part of his three-hit performance.

Chicago will hand the ball to another member of that 2016 team, Kyle Hendricks. The 32-year-old has been surprisingly inconsistent this year but he is coming off a fabulous outing against the Cardinals where he held them scoreless over 7 1/3 innings of work. Hendricks is a perfect 4-0 against the Reds at Wrigley Field over his career and we think he'll build on those positive vibes tonight.

Cincinnati counters with one of their best pitching prospects in rookie Graham Ashcraft. The 6-2 240-pounder has dazzled Reds fans by posting a 4-1 record with a 3.27 ERA through 7 starts. However, the big right-hander hasn't performed well over his last 3 starts (6.11 ERA, 1.42 WHIP) and that could be problematic against Contreras and Ian Happ tonight in the Windy City.

Anytime we can get this powerful Dodgers lineup at under -140 odds we are likely to jump on it. The Boys in Blue finished up their road trip at 6-3 and will start an 11-game homestand tonight. Meanwhile, the Padres have been struggling to find any type of offensive rhythm, though Manny Machado may return to the lineup tonight from an ankle sprain.

Joe Musgrove is having a sensational season for the Padres, as he is 8-1 with a tiny ERA of 2.12. However, the 29-year-old right-hander has yet to find any type of success against the Dodgers as he is 0-4 against them in his career. Musgrove has had a hard time getting Freddie Freeman (.400 BA, 1 HR) and Max Muncy (.467 BA, 1 HR) out, so that should bode well for our LA bet tonight.

While we aren't crazy about Dodgers starter Mitch White, we do like the fact that only three of San Diego's hitters have ever faced White. Our hope is that White can keep the Pads off balance for at least four or five innings. Lay the small chalk with the Dodgers!

Fading the Oakland A's has been a profitable strategy for us and we'll keep firing away with it today. The Mariners swept a three-game series against the A's just a few days ago while outscoring them by 16 runs! Rookie of the Year candidate Julio Rodriguez had had a terrific June by bashing 6 homers, driving in 15 runs, and stealing 5 bases.

We just don't see the A's doing much offensive damage against M's starter Logan Gilbert, who is 8-3 with an impressive 2.44 ERA. The 25-year-old rightie has struck out 89 hitters in 88.2 innings pitched. Seeing that Oakland is only hitting .207 against righties makes us think that Gilbert shouldn't have any trouble tonight.

Oakland will send Adrian Martinez to the mound with the hopes that he can end their three-game losing streak. The 25-year-old was flawless in his only start back on May 10 against the Tigers. However, we expect this M's lineup to shake him up a bit tonight.

Let's make it a thrilling Thursday with another winning day! Best of luck with all of your action!