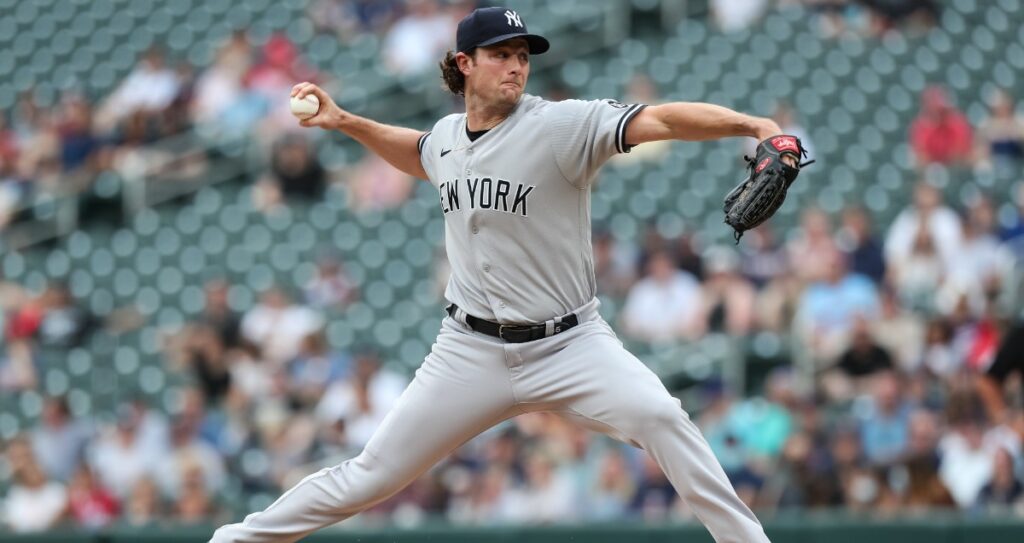 Gerrit Cole is the main reason we like the Yankees to beat the Red Sox as one of our MLB Best Bets for Thursday.
By Mike Noblin on July 7, 2022

OUCH! We suffered a dreadful 0-3 performance last night. We knew that we were due for some regression to the mean but it's still absolutely no fun when it happens. Both the Phillies and Astros lost outright as huge favorites and the Diamondbacks blew a late lead to the Giants.

Even after the rough night, we still sit at 40-20 overall. As we have warned on several occasions, you have to be okay with both winning and losing streaks when betting on baseball. Let's bounce back with 3 MLB best bets for Thursday, July 7.

This Orioles team is a whole lot better than people expected this season. Sure, they still have a losing record at 39-44. That said, a deep dive into their record shows us that Baltimore is a respectable 21-17 at home. They've also played the 2nd toughest schedule in all of baseball so far.

The O's have won four in a row and we think they make it five against the Angels. LA sends youngster Chase Silseth to the mound and his big league career has gotten off to a rocky start (1-2, 5.23 ERA). None of Baltimore's hitters have ever faced Silseth but the whole lineup has been in fine current form as they scored 19 runs in their three-game series against the Rangers.

Betting on a guy like Jordan Lyles (4-7, 4.70 ERA) is never easy, even though he looked much better against the Twins last Saturday. Angels superstar Mike Trout is batting .444 against Lyles in his career with 2 home runs. However, Trout is in the midst of a 1 for 18 slump at the plate and we are hoping that continues tonight.

The Yanks let us down a couple of nights ago but their bats woke up considerably last night as they put up 16 runs against Pittsburgh. We'll jump back on the pinstripes bandwagon tonight, especially since they've won 8 of their last 9 regular-season games against the Red Sox. Boston was blown out on Tuesday and Wednesday by Tampa Bay and they've only won 4 out of their last 10 games.

Gerrit Cole is having another phenomenal season as he is 7-2 with a 2.99 ERA. However, the Red Sox were able to get to Cole in last year's AL Wild Card game. Nevertheless, anytime we can get a gamer like Cole at a reasonable price, we are more than willing to back him. Red Sox slugger Rafael Devers has 4 career homers off of Cole but he missed the last two games with back and hamstring soreness.

Josh Winckowski has pitched well so far this season, as he is 3-2 with a 3.12 ERA. However, we think the 24-year-old has been overly lucky so far. He's giving up more than 10 hits per 9 innings and opponents are batting .290 against him. We'll look for the Yanks' offense to stay hot in this one and get them yet another comfortable victory against the BoSox.

Giants starter Logan Webb has been dealing of late, as he is 1-1 over his last three starts with a WHIP of only 0.89 and an ERA of only 1.89. Though this worries us a little, Webb did give up 5 runs (3 earned) to the White Sox during his last start. Jake Cronenworth, Trent Grisham, and Eric Hosmer are all hitting .300 or better against Webb for their careers.

Though the starting pitching matchup is pretty much a toss-up, San Diego has the much stronger bullpen. The Pads' relievers have an ERA of 3.61 on the year and a WHIP of 1.12. The Giants' pen has an ERA of 4.30 and a WHIP of 1.34. We have the Pads winning a close one.

Best of luck with all your Thursday action. Let's get back in the win column!